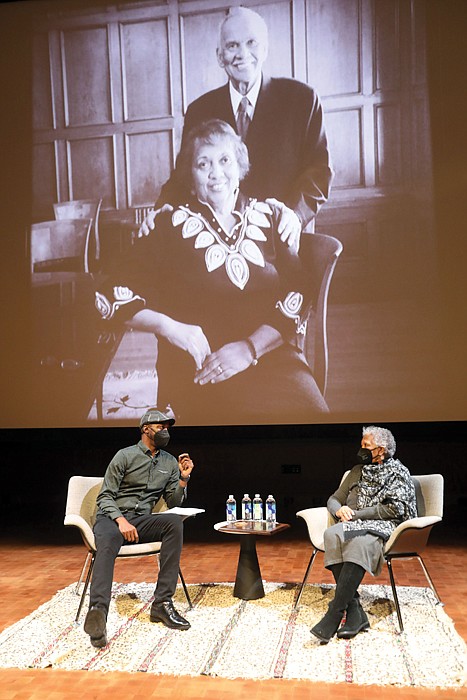 Jean Patterson Boone, publisher of the Richmond Free Press, talks with Virginia Commonwealth University Professor Chioke I’Anson about the vision and trials in starting the award-winning newspaper 30 years ago during the George Mason Award ceremony Feb. 3 sponsored by the Virginia Pro Chapter of the Society of Professional Journalists. Mrs. Boone and her late husband, Raymond H. Boone, who founded the publication in January 1992, were recognized by the organization with the George Mason Award for their outstanding contributions to the field of journalism. The ceremony, held at the VCU Institute for Contemporary Art and livestreamed virtually, was originally scheduled in 2020 but delayed because of the pandemic. The portrait of the Boones shown on a screen above the stage was taken in April 2014 by Cleveland-based photojournalist Annie O’Neill just months before Mr. Boone’s death in June 2014 of pancreatic cancer. The Free Press also was recognized by Richmond Delegate Jeff Bourne during Monday’s floor session of the Virginia House of Delegates for its 30-year legacy to “inform, educate and empower readers” in the Richmond area.