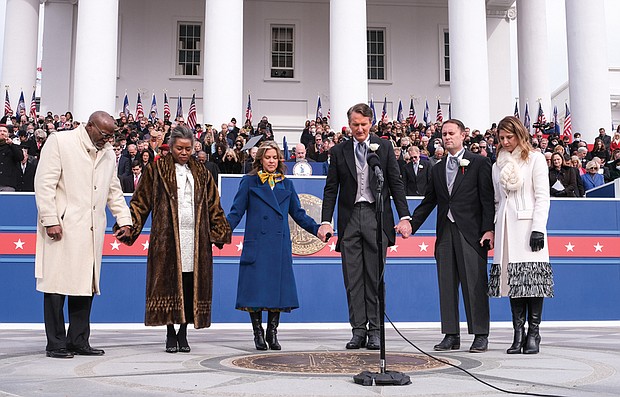 Newly sworn-in Gov. Glenn A. Youngkin, third from right, caps off last Saturday’s inaugural ceremony with a prayer for the Commonwealth he delivered with his fellow GOP top office holders and their spouses. They are, from left, Terence Sears, and his wife, Lt. Gov. Winsome Earle-Sears; First Lady Suzanne youngkin; Attorney General Jason Miyares and his wife, Page Atkinson Miyares. Below, The Virginia union university Choir performs on the steps of the Capitol during the inaugural ceremony. The choir also had been invited by Gov. Glenn A. youngkin to perform with the Richmond Symphony at the inauguration’s Spirit of Imagination Candlelight Dinner last Friday at the Science Museum of Virginia. The choir is under the direction of David Bratton and Assistant Director Joel Lester.

“The spirit of Virginia is alive and well,” Glenn Allen Youngkin declared as after being sworn in as Virginia’s 74th governor.