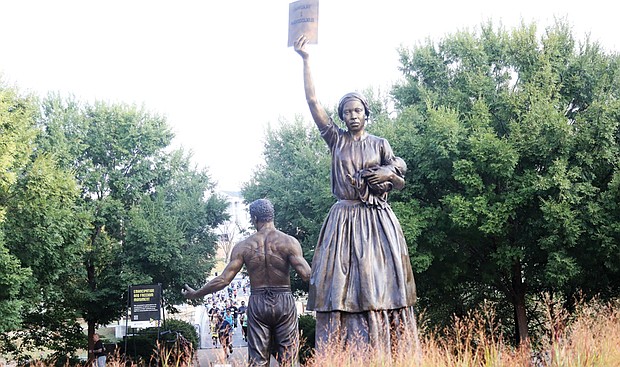 As runners in the inaugural RUN RICHMOND 16.19 approached Brown’s Island Sept. 17, the Emancipation and Freedom Monument awaited them. The monument features two 12-foot bronze figures – a male, and a female holding an infant – who represent those newly freed from slavery. Designed by artist and sculptor, Thomas Jay Warren, of Oregon, the brick plaza and landscaping was designed by architect Drew Harrigan of Four Winds Design and constructed by Fred Williams and his team at Williams Construction. Here is how Venture Richmond describes the monument: "On a rainy September 22, 2021, following nearly 10 years of planning and fundraising, Virginia’s Dr. Martin Luther King, Jr. Memorial Commission dedicated and unveiled Richmond’s newest monument — the Emancipation and Freedom Monument — on Brown’s Island, along Downtown Richmond’s riverfront. The new monument commemorates the efforts of both enslaved and free African- Americans whose ancestors endured tragedies and triumphs in their struggle to gain their freedom through emancipation.”