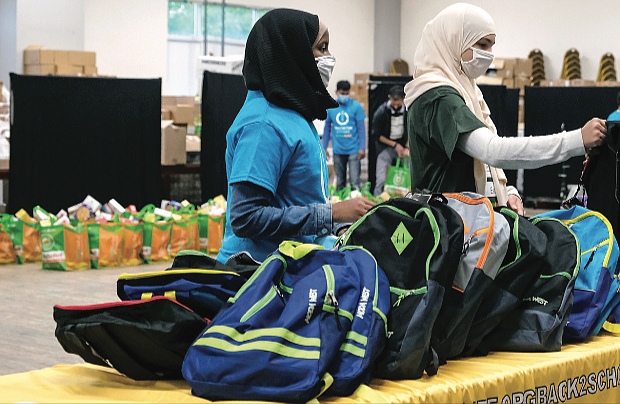 When the pencils, paper and notebooks come out, you know it’s time for school. Fosio Issack, left, and Jennah Elganainy, both 15, volunteer to help distribute backpacks filled with school supplies on a recent Saturday at ICNA Relief’s Back2School program. ICNA Relief is a national domestic relief organization that is part of the Islamic Circle of North America. The backpacks were distributed to children of all faiths and backgrounds in conjunction with Henrico County Public Schools. It was part of a national effort by the organization to equip 45,000 students with the essentials they need to succeed in the classrooms. The volunteer effort took place at the Islamic Center of Henrico/Al Falah on Impala Drive in the county. It was also the organization’s food distribution day. Volunteers packed bags of nutritious goods to be distributed as well. 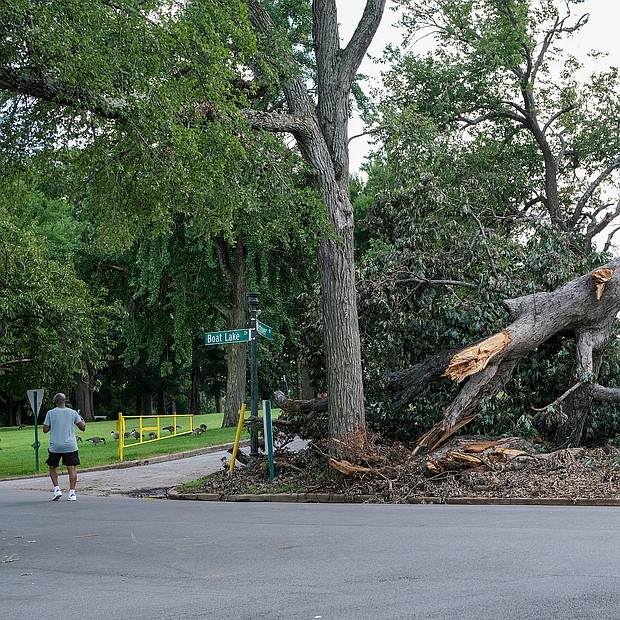 This fallen monster of a tree in Byrd Park exemplifies the damage that has resulted from repeated heavy rains in recent weeks. Location: Boat Lake and Westover Drive. The photo was taken Aug. 19, but it is unknown when the tree fell. Richmond was spared substantial impact from the remnants of Hurricane Fred, which largely bypassed Central Virginia as it moved North. So far during August, the Richmond area has recorded 8.22 inches of rain – or the equivalent of 80 inches of snow. The total rainfall is about 5 inches more than the 10-year rainfall norm for August. The rain spigot was turned off in much of Metro Richmond this week as hot, humid days returned. The forecast indicates that isolated thunderstorms may roll through again on Saturday and Sunday. 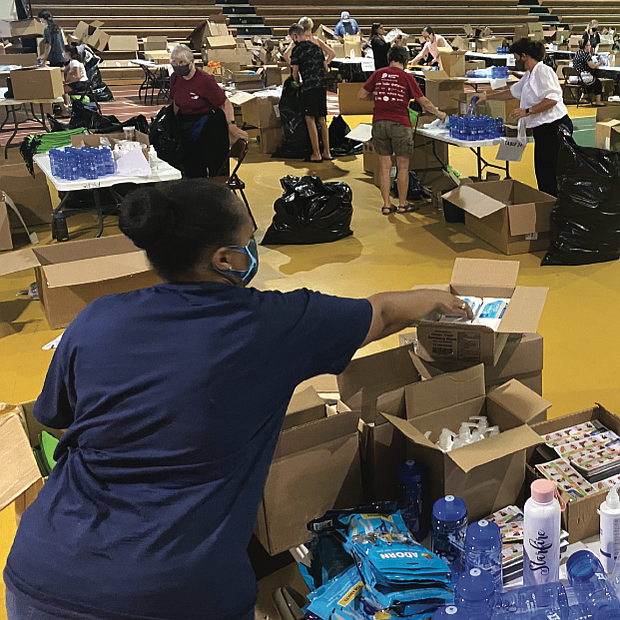 On Tuesday, community volunteers Tracie Tucker, left, and Barbara Burton, the parent of two RPS graduates, participated in a “PPE Party Packing” effort at the Arthur Ashe Jr. Athletic Center next to The Diamond to pack kits of personal protective equipment, or PPE, for students. Also joining in the effort were RPS teachers and staff and Richmond social workers and employees from the Office of Community Engagement. Each kit contains hand sanitizer, a mask, a water bottle, a thermometer and a magnet printed in both English and Spanish with the symptoms to check for during the pandemic. The group hoped to pack at least 25,000 PPE kits that will be given to students on the opening day. Gov. Northam and the state health commissioner have issued public health orders for all Virginia students in kindergarten through 12th grade to wear masks inside schools. The goal is for students to stay healthy and avoid the coronavirus. 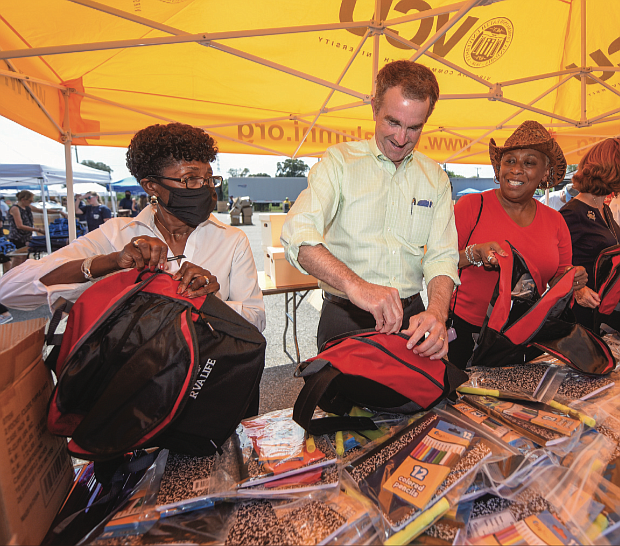 Efforts are in full swing to get youngsters ready for the start of classes in Richmond Public Schools. On Wednesday, Gov. Ralph S. Northam, second from left, and his wife, First Lady Pamela Northam, second from right, join Richmond city and school officials in filling new backpacks with school supplies at the Ultimate Backpack Supply Drive. RPS partnered with CoStar Group, the VCU Alumni Association and Communities In School for the fourth annual event that took place at The Diamond on Arthur Ashe Boulevard. The goal was to collect up to 15,000 backpacks to give to city students as they return to in-person learning for the first time since March 2020. With Gov. and Mrs. Northam are, from left, City Council President Cynthia I. Newbille, School Board Chairwoman Cheryl L. Burke and RPS Superintendent Jason Kamras. 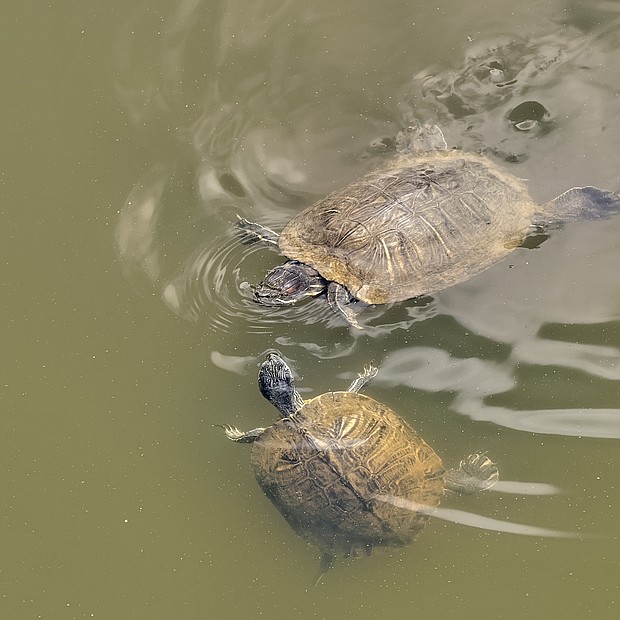 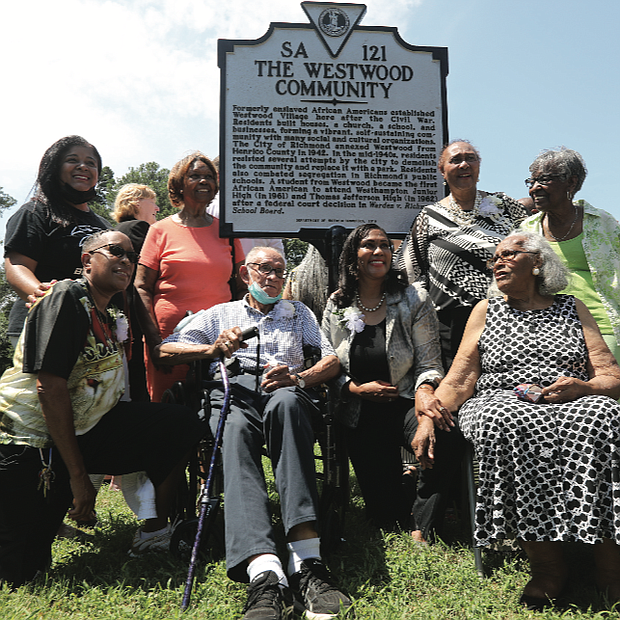 Current and former residents of Westwood celebrate last Sunday a new state historical marker honoring the community in Richmond’s West End that was started by formerly enslaved people following the Civil War. Location of marker: Willow Lawn Drive and Dunbar Street. Residents built homes, a church, a school and businesses, as well as social and cultural organizations in the community that originally was a part of Henrico County. It was annexed to Richmond in 1942 and residents later successfully fought attempts by city officials to demolish the community and replace it with a public park. Westwood Baptist Church remains the most prominent landmark. Kathleen Hopkins Valentine, 93, seated at right, is the oldest resident living in Westwood. She said she and her family moved when she was 4 from Philadelphia to what was then called Westwood Village. Others pictured here are, from left, Kelly Johnson Crowder, whose mother, Jane Cooper Johnson, integrated Westhampton Junior High and Thomas Jefferson High School in the early 1960s; Charlene Hopkins, kneeling, and Frances Bush Jones, both cousins of tennis great Arthur Ashe Jr., whose grandparents lived in Westwood; Warrick Taylor, a former Westwood resident; Norfolk State University professor Dr. Colita Nichols Fairfax, immediate past chair of the Virginia Board of Historic Resources, kneeling, and her mother, Brenda Dabney Nichols, who was born and raised in Westwood; and Lennie Anderson Thornton, a former Westwood resident. The Friends of Westwood Playground paid for the marker. 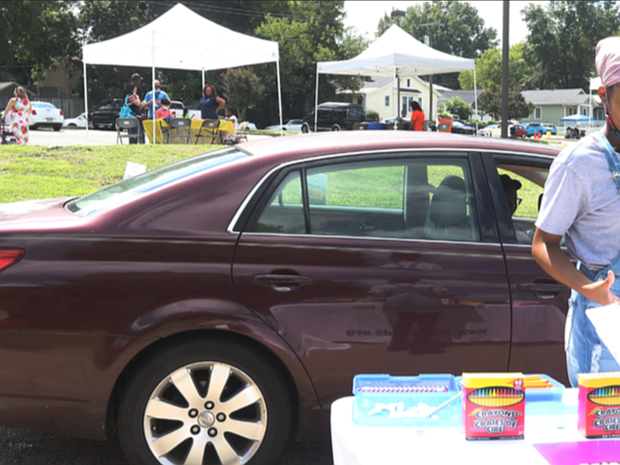 Karma Delvalle, 13, picks up school supplies last Saturday during the 15th Annual “We Care” festival at Overby-Sheppard Elementary School in Highland Park. Because of the pandemic, the festival was set up as a drive-thru event in the school’s driveway, with cars inching along past the booths and people getting out to pick up materials. Festival-goers enjoyed music and picking up the giveaways from various community organizations. COVID-19 testing and vaccines were available at the festival from Capital Area Health Network.