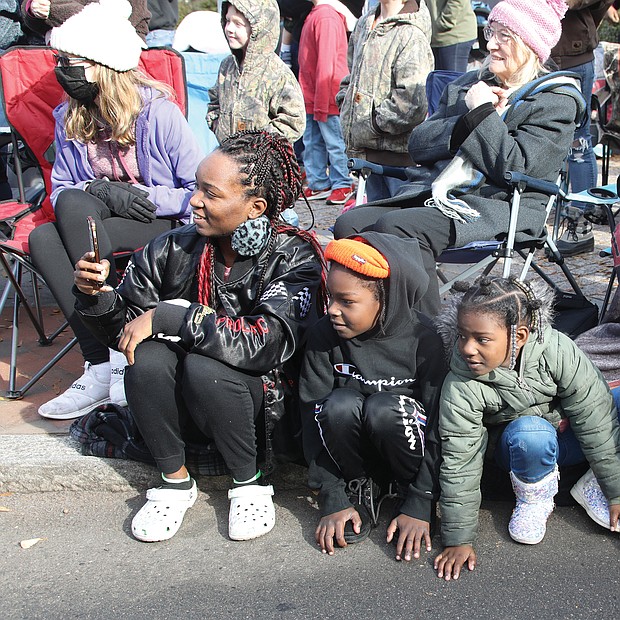 Timmesha Grimes, left, and her 5-year-old son, Malikhai Hamilton, right, and her nephew and niece, Tisiah and Tiriyah Brassell, ages 7 and 5, are engrossed in something just like the crowd around them on the curb along Broad Street last Saturday. Ms. Grimes even pulled out her cellphone to record the action. What is it? Hint: It’s an annual event that kicks off the December holidays in Downtown. 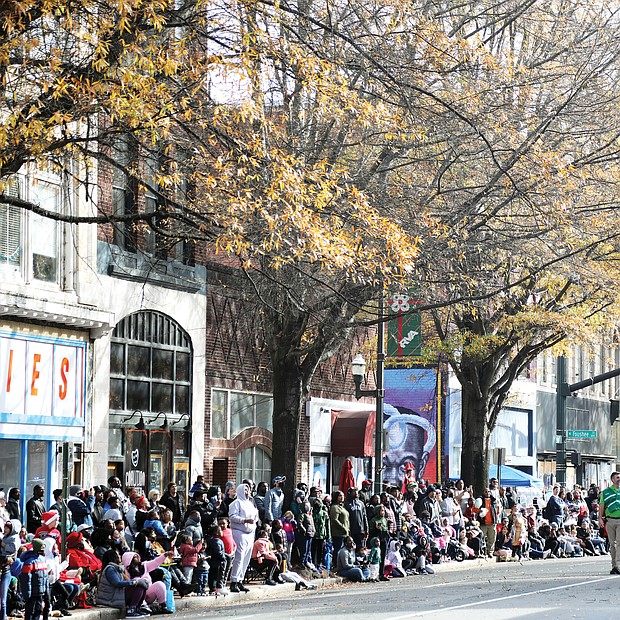 On Saturday, more than 85 units in the 38th Annual Dominion Energy Christmas Parade made the 21⁄2-mile trek down Broad Street to the delight of young and old alike who clapped, cheered, waved and laughed as huge inflatable characters passed by, like Patient First’s Kung Fu Panda and the Puritan Cleaners’ vest-wearing bear. 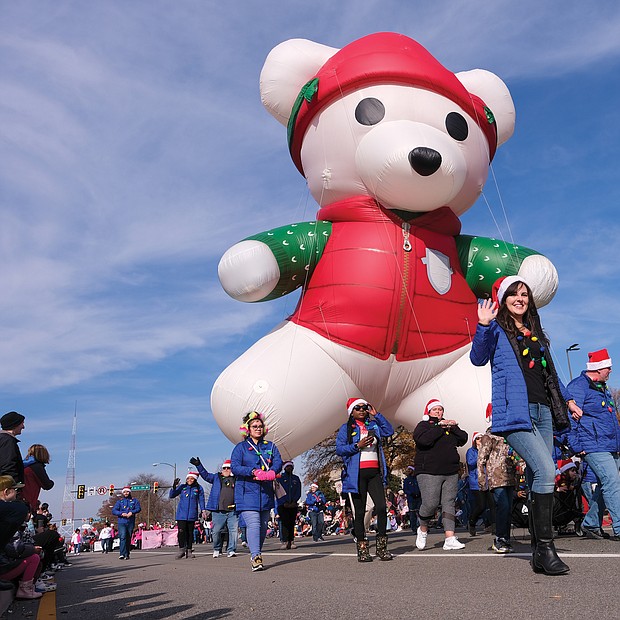 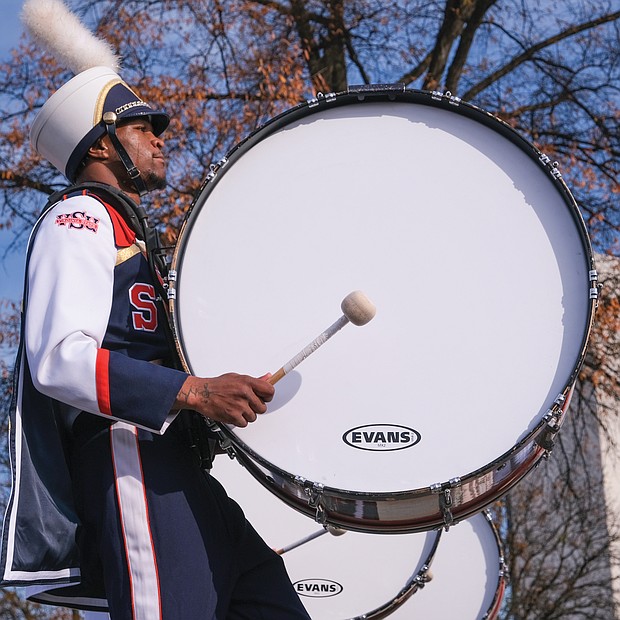 There was music, including from the Virginia State University Trojan Explosion Marching Band... 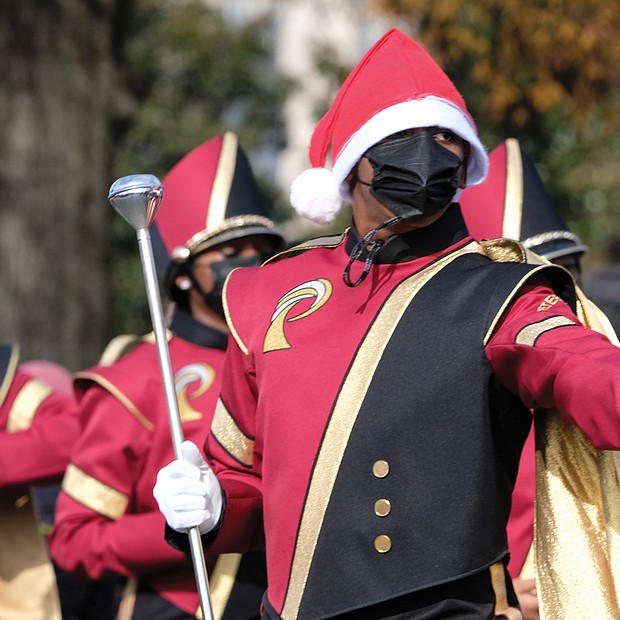 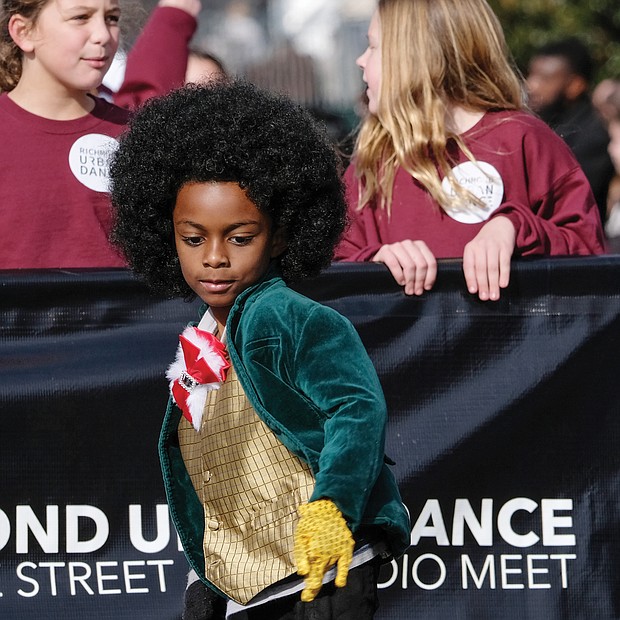 And there were dancers, who showed off their moves, such as one costumed youngster with Richmond Urban Dance. 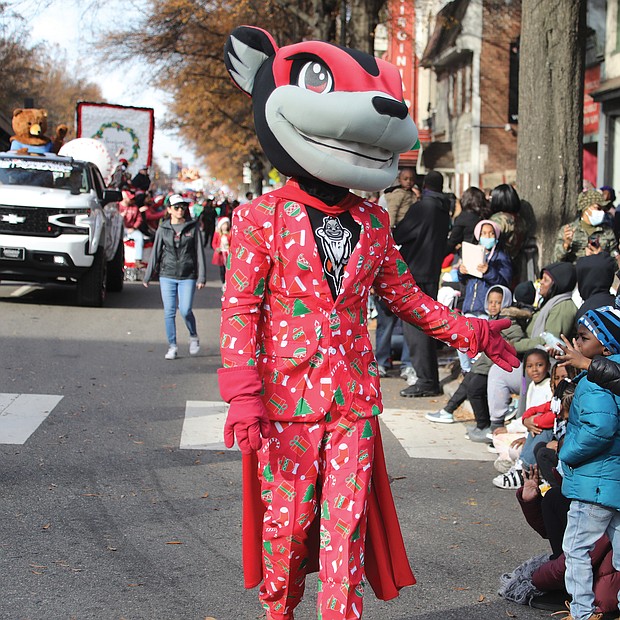 Characters interacted with youngsters along the parade route. Nutzy, the mascot of the Richmond Flying Squirrels, shows off his holiday attire. 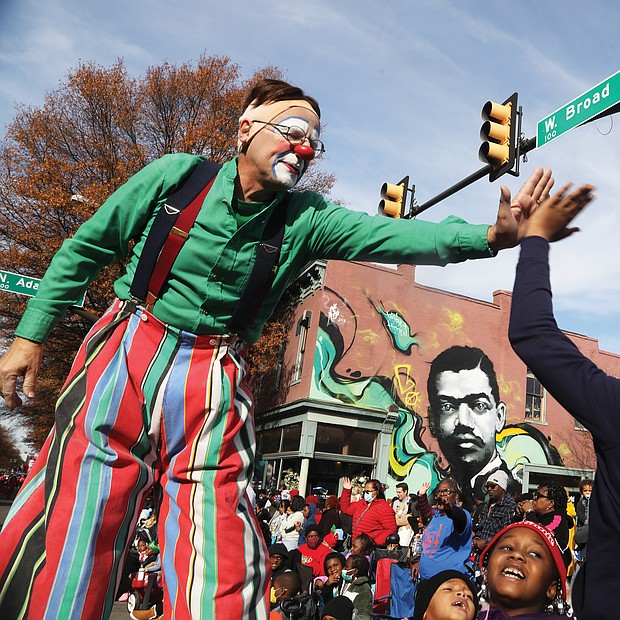 A stilt-walking clown gives a high-five to a child in the crowd. 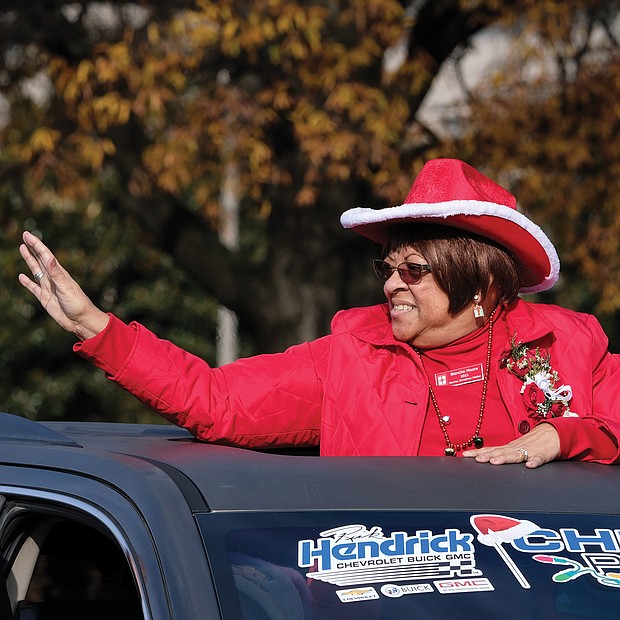 And there were officials, including Blanche Moore, Henrico Christmas Mother 2021,... 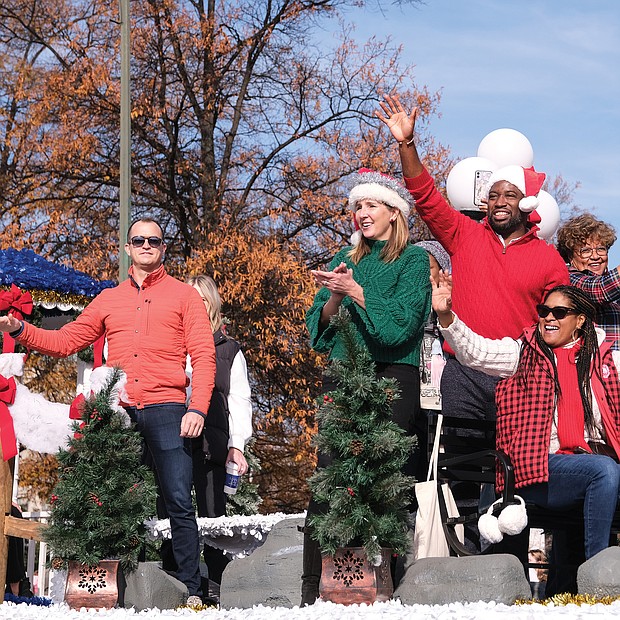 ...and Mayor Levar M. Stoney and members of City Council and others who waved to the crowd from their floats. 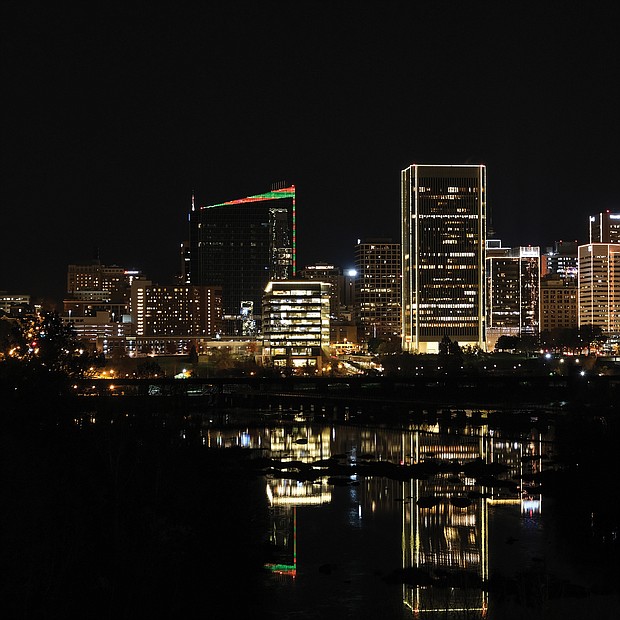 Richmond is all decked out and ready for the holiday, starting with a bevy of events last weekend. The city’s Downtown skyline was all lit up with RVA Illuminates last Friday, along with lights at Kanawha Plaza. 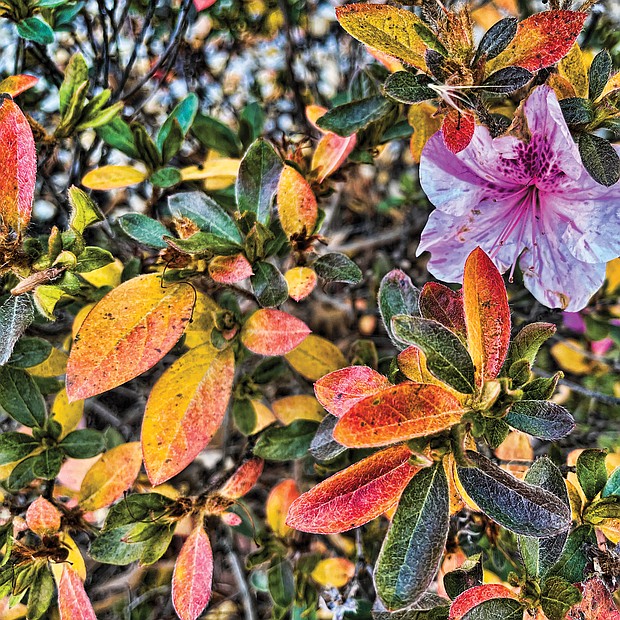 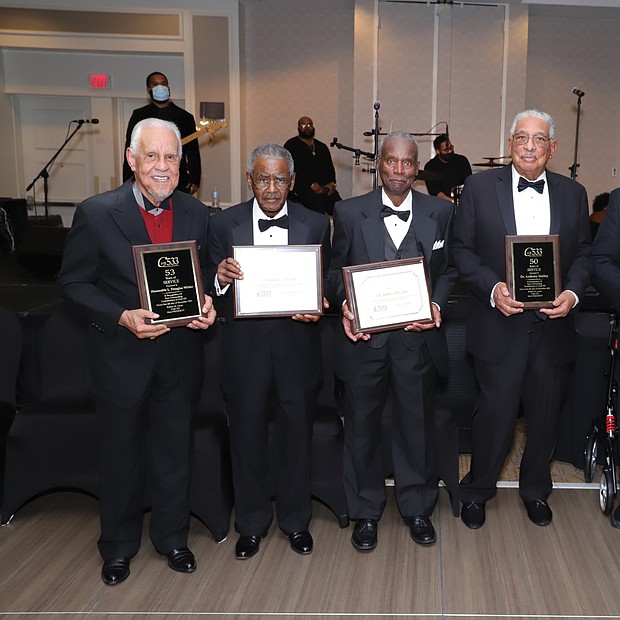 Club 533 celebrated its 65th anniversary last Saturday with an anniversary and holiday ball held at a Downtown hotel. Started in 1956, Club 533 is one of the oldest private groups in Richmond founded by seven men seeking to improve the social and civic welfare of people in the community. The Jackson Ward club has been used as a meeting place to develop strategies for social, political and economic gains that would benefit the African- American community. In the 65 years since its founding, the organization has grown to more than 200 members— all men of accomplishment, including 41 new members who were welcomed during the summer. Members and their guests enjoyed the festive black-tie dinner dance featuring Legacy Band. President Robert M. Lester, right, honors the club’s longest-serving members of more than 40 and 50 years with plaques. They are, from left, former Gov. L. Douglas Wilder, the evening’s keynote speaker; Linwood Eddleton; Dr. James McCain; Dr. Anthony Malloy; and Alexander “Jack” Mosby. 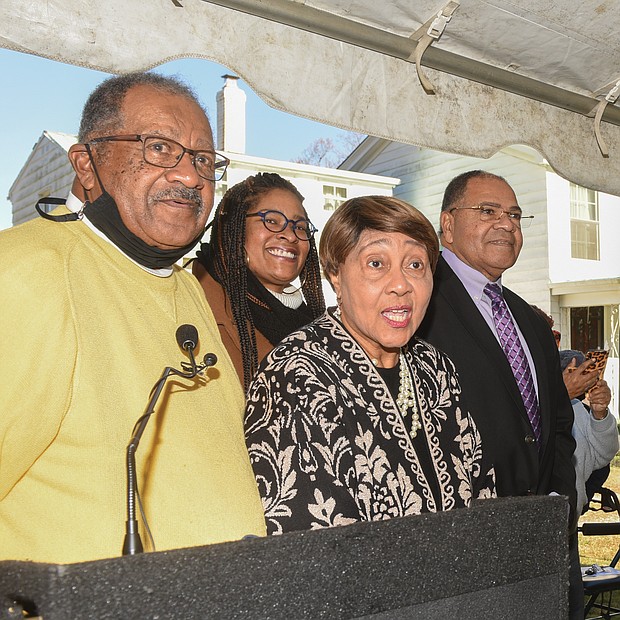 A new historic marker recognizing the Ziontown community in Henrico County was dedicated Dec. 3 in a ceremony hosted by the Family & Friends of Ziontown and the Henrico Historic Preservation Advisory Committee as part of the Historical Roadside Marker program.The community was founded in 1870 by Henry Pryor, a formerly enslaved man, who purchased 5 acres around the area now known as Ridge Road at Fountain Lane and extending south to River Road. He named the settlement Ziontown, meaning Heavenly Place. The community grew to include about 50 homes with up to 275 residents. Subdivisions have encroached upon the area in recent decades. Last week’s celebration drew longtime residents, as well as those who grew up in the area and others with ties to the community, including the Lambert family, whose home in the 8300 block of Ridge Road served as the site of the dedication. Among the attendees are, from left, John A. Lambert Sr.; Richmond City Councilwoman Ann-Frances Lambert; Brenda Dabney Nichols, who led the marker effort; Richard A. Lambert; the Rev. Larry Collins; and Dr. Colita Nichols Fairfax.