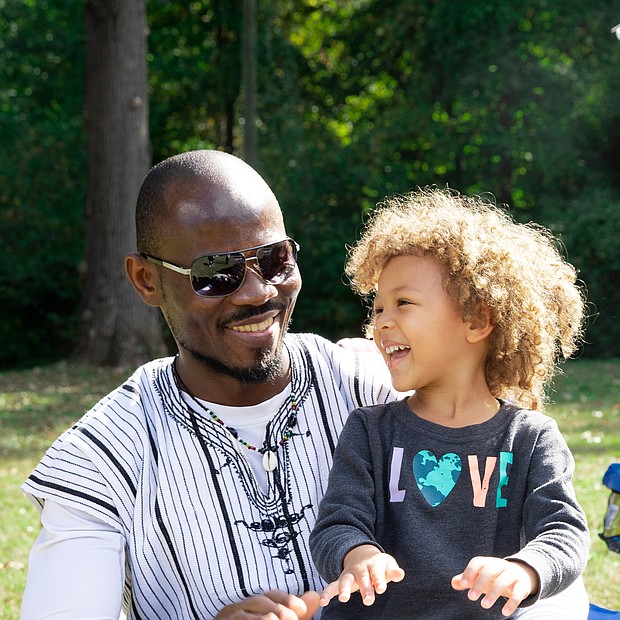 Three-year-old Zara takes a short drumming lesson with her father, Babs, an artist originally from West Africa who now lives in Richmond. Babs, whose paintings include landscapes and African wildlife, was among the bevy of artists participating last Saturday in the 2nd Annual Art Under the Pines exhibition at Pine Camp Cultural Arts & Community Center’s Sculpture Garden. Zara and her older sister, Chali, 9, kept their father company during the event. 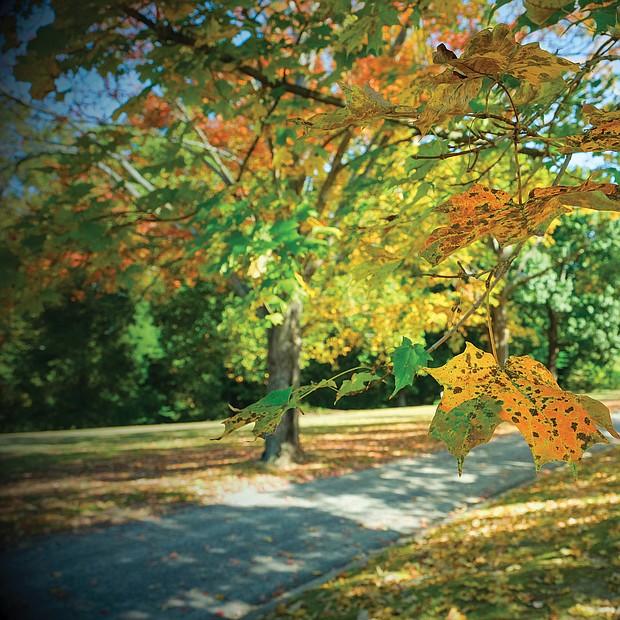 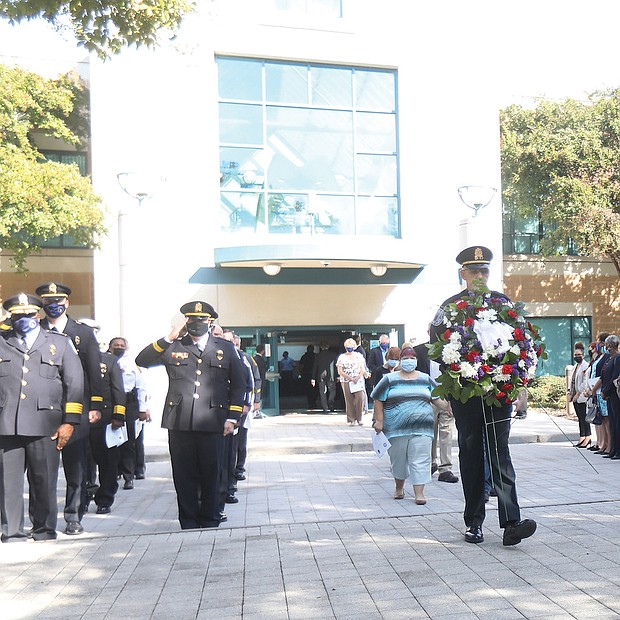 Richmond Police Lt. Robert C. Marland somberly walks to place a wreath on the stone memorial outside the Richmond Police Training Academy listing the names of city officers who have died in the line of duty. The ceremony honoring the fallen officers was held Oct. 14 outside the academy on West Graham Road in North Side as part of commemorations for National Police Week, Oct. 11-17. Family members, officers and city residents attended the event. 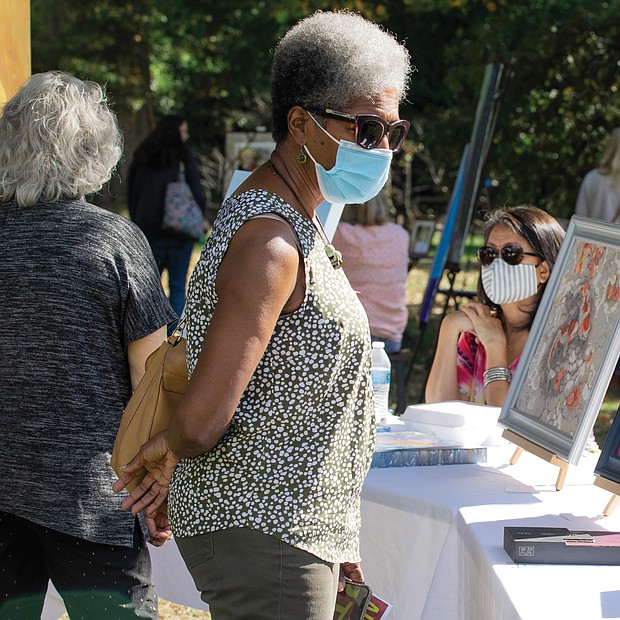 Art and music flourished outdoors last Saturday at the 2nd Annual Art Under the Pines, a free exhibition of local artists, held in the Sculpture Garden of Pine Camp Cultural Arts and Community Center in North Side. Vashti Woods finds the weather perfect for browsing, buying and enjoying art of all types. 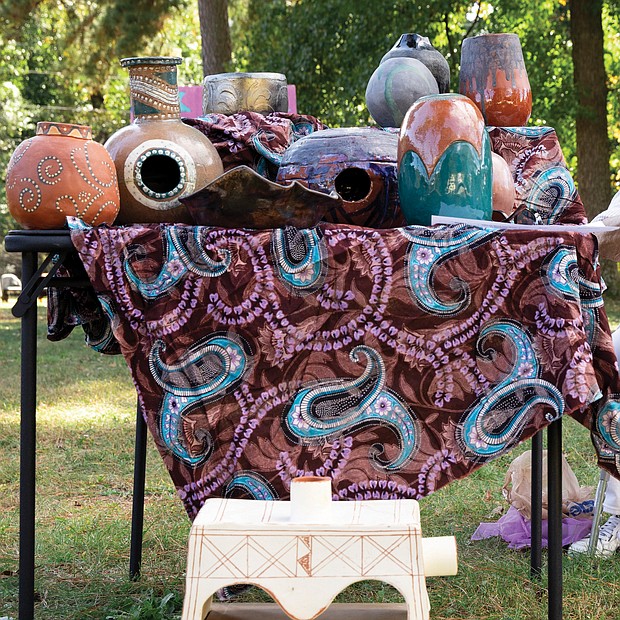 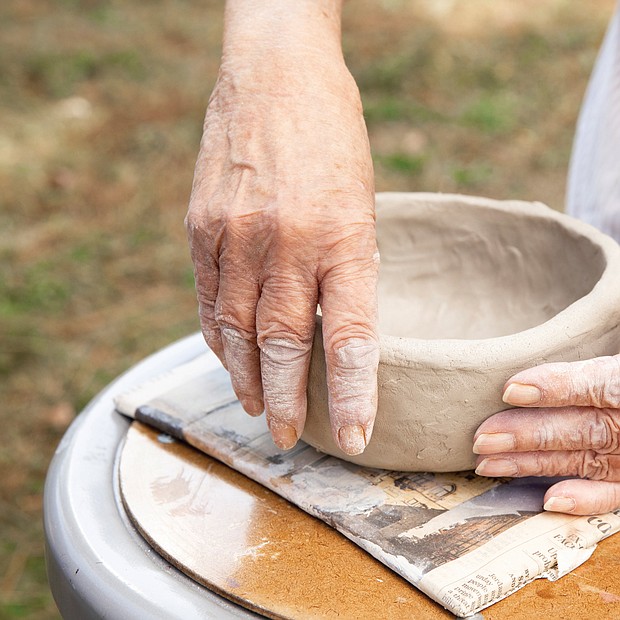 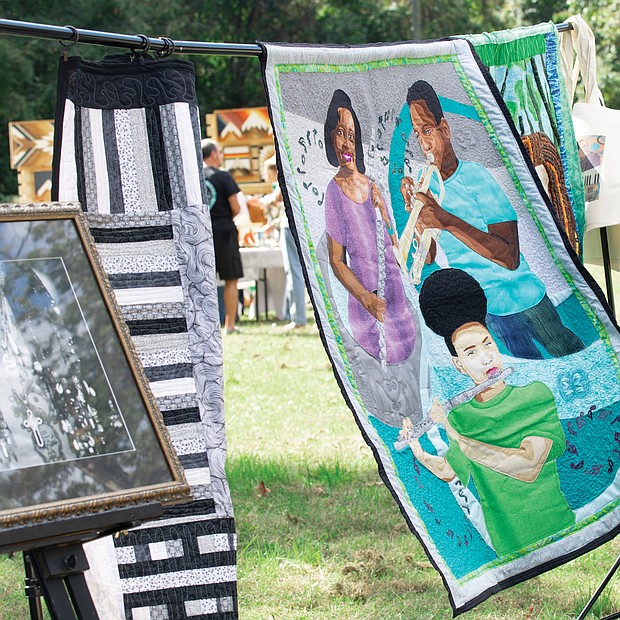 Quilt artist Unicia Buster, a former graphic designer with the Richmond Free Press, discusses the images and inspiration behind one of her quilts. 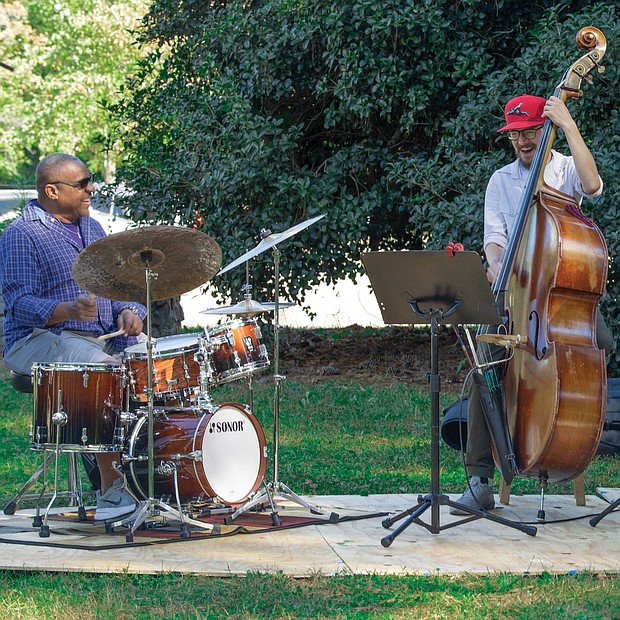 The Larri Branch Trio provides the jazz accompaniment setting the laid-back vibe at the event, where people enjoyed interactive workshops with artists and created pieces of their own. 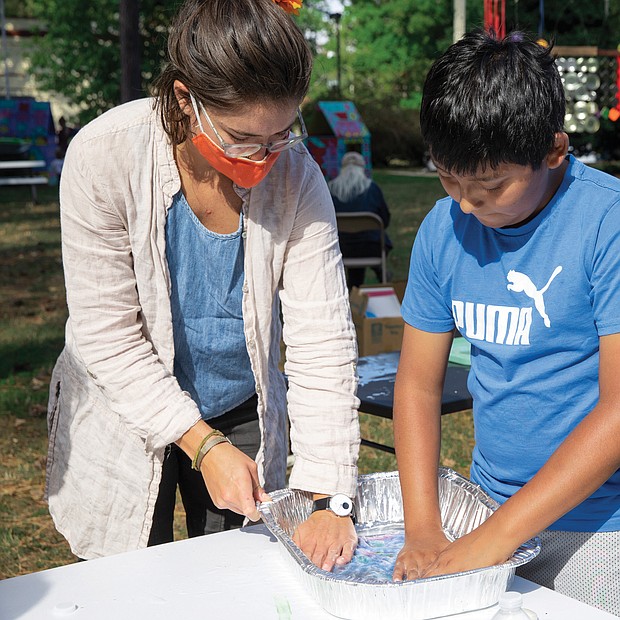 Joshua Perez, 11, learns the art of making felt from artist Lindsay Parnell. Work from the event will be on exhibit through Dec. 31 in the Spotlight Gallery at Pine Camp, 4901 Old Brook Road. 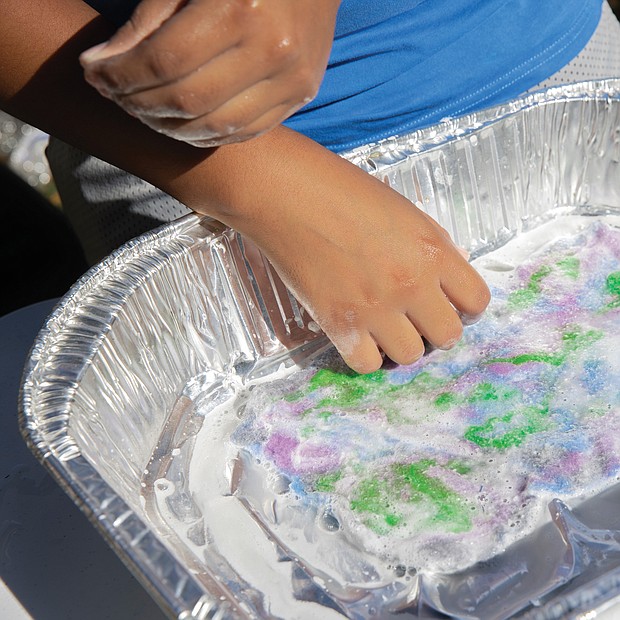 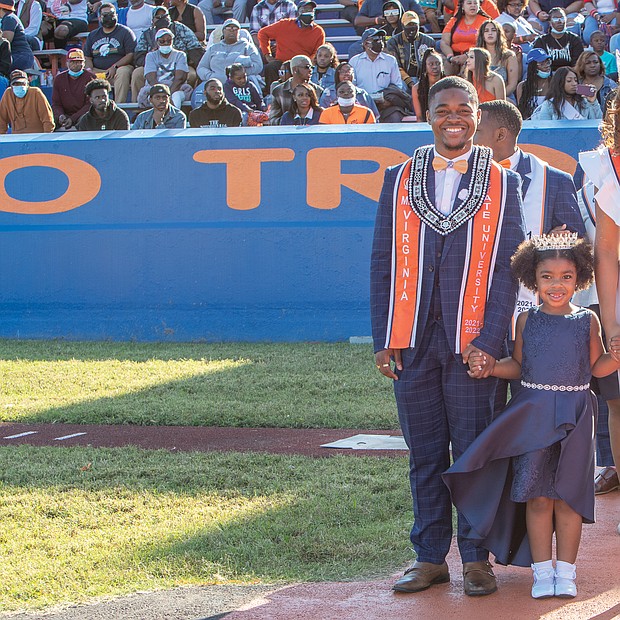 Homecoming 2021 was a joyful reunion at Virginia State University, where hundreds of alumni returned for a weekend of events under the theme “Back Home on the Hill.” Last Saturday was a real highlight, with people setting up tents and enjoying food, music and conversation at campus tailgates. The Trojans football team scored a big 27-7 victory against Lincoln University before a cheering crowd at Rogers Stadium. Members of the VSU Royal Court strutted during halftime. Mr. VSU, Isaiah Matthews-Braxton of North Carolina, and Miss VSU, Ashlee Gray of Maryland, enjoyed a glitzy and glamourous official coronation ceremony earlier during homecoming week, where the inaugural Little Miss VSU, 5-year-old Jae Coleman, was crowned. 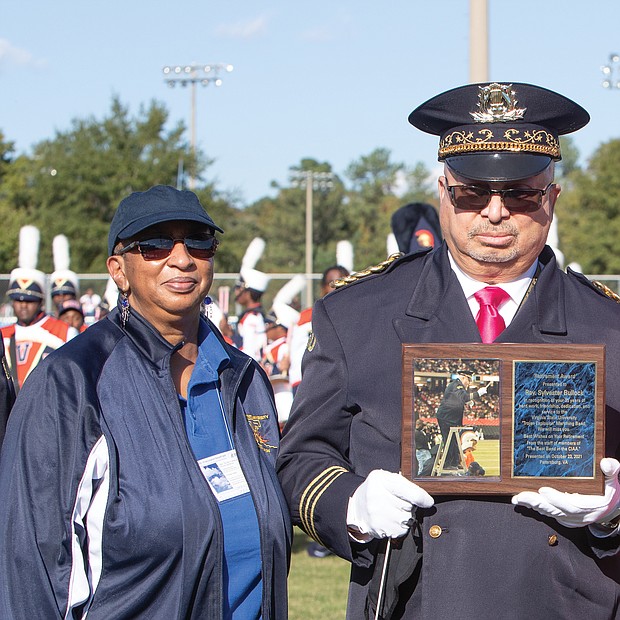 VSU President Makola Abdullah presents a plaque to the Rev. Sylvester Bullock, VSU’s assistant band director, who is retiring after 35 years of service to the Trojan Explosion March Band. 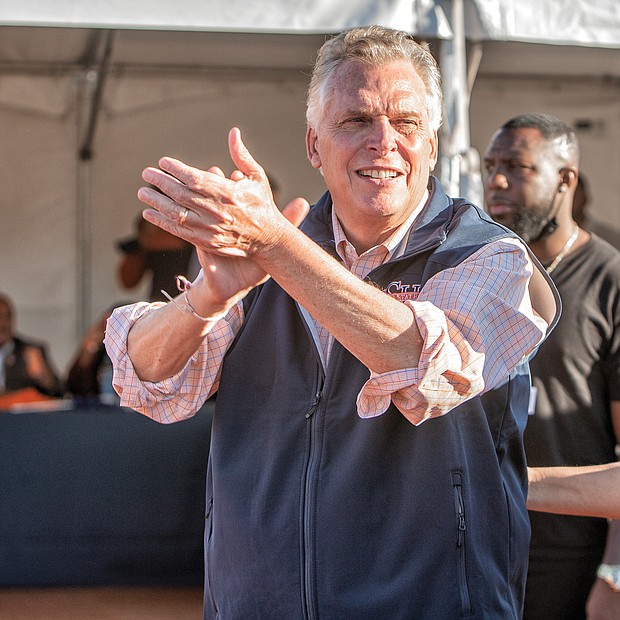 Politics also was a part of the mix with Democratic gubernatorial candidate Terry McAuliffe, a former governor, and his running mate, Delegate Hala Ayala, who is running for lieutenant governor, greeting people as they moved through the crowd. 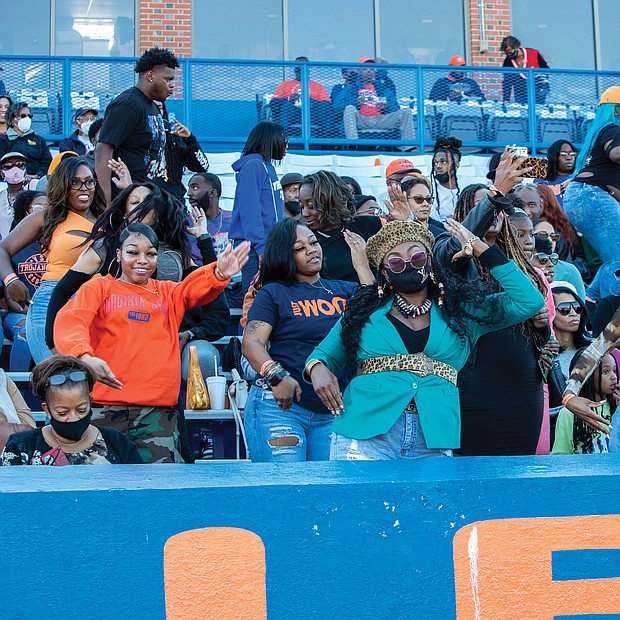 The fans in the stands rocked to the sounds of the VSU Trojan Explosion Marching Band. 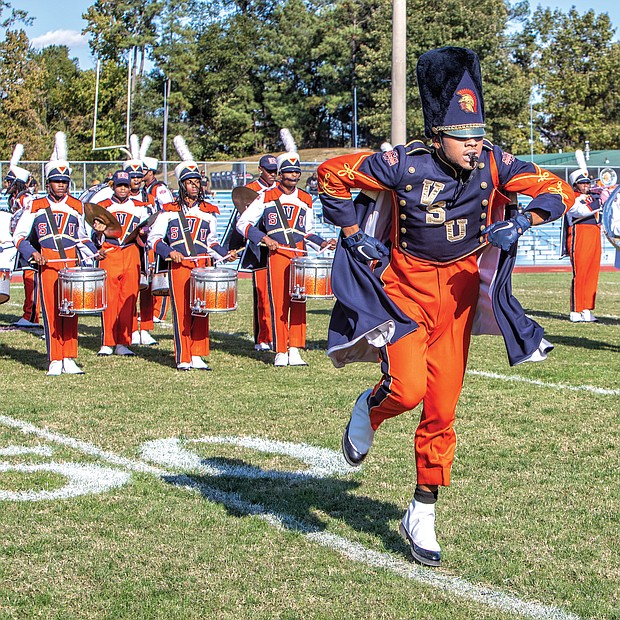 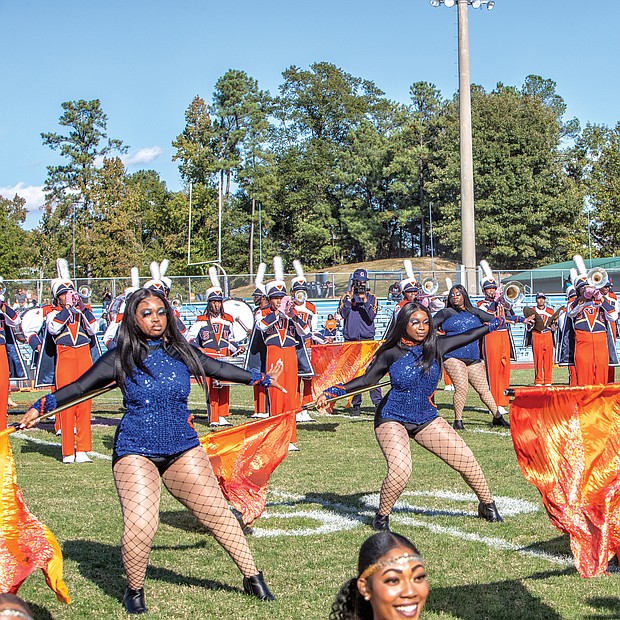 The band’s flag bearers and the Woo Woos, the university’s noted cheerleading squad, showed off their moves and kept the homecoming spirit going. 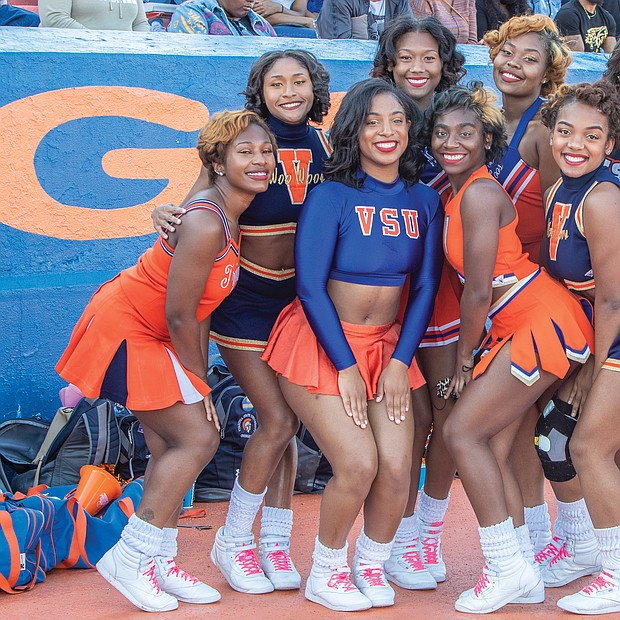