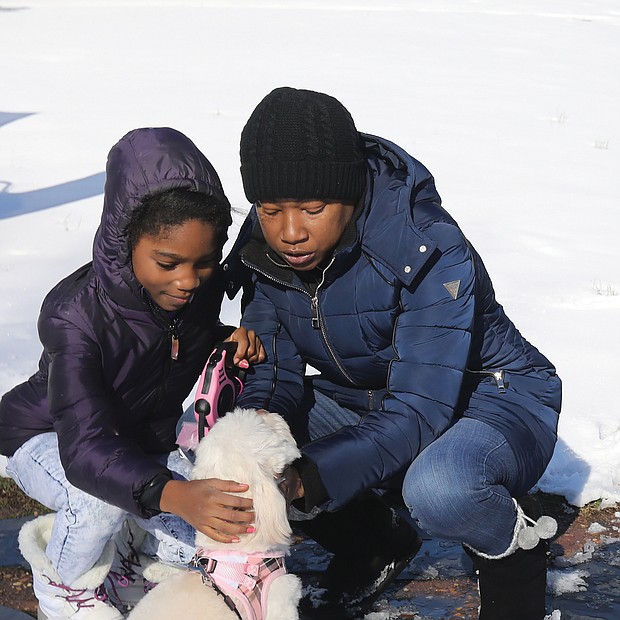 Nicole Lindsay and her 8-year-old daughter, Amira Hill, pause during a snowy walk Tuesday to pet the newest member of the family, Fuzzi, a 2-year-old Bichon Frise. Amira, a fourth-grader engaged in virtual learning at Richmond’s Overby- Sheppard Elementary School, wanted to show Fuzzi around the North Side neighborhood. The family was walking in the 2800 block of Wellington St., where the bright sunshine had melted snow from the sidewalks. 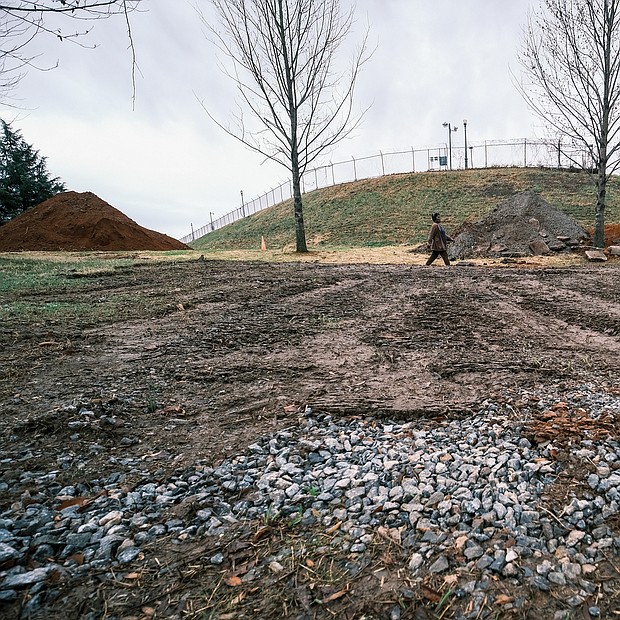 A key element of Richmond’s drinking water supply system is undergoing about $54 million in major improvements. These photos document the construction underway at the historic Byrd Park Reservoir that first went into service 145 years ago to supply water to the city and surrounding counties. The purpose of the work: To keep the 55 million-gallon storage facility functional. The city Department of Public Utilities is projecting to spend $60 million to cover all costs, about $7 million more than anticipated when the project was first envisioned four years ago. So far, about $4.7 million has been spent on inspections, planning and design, DPU has reported. Opened in 1876, the reservoir is located on the east side of Blanton Avenue and is bounded by Grant Street and Police Memorial Way. 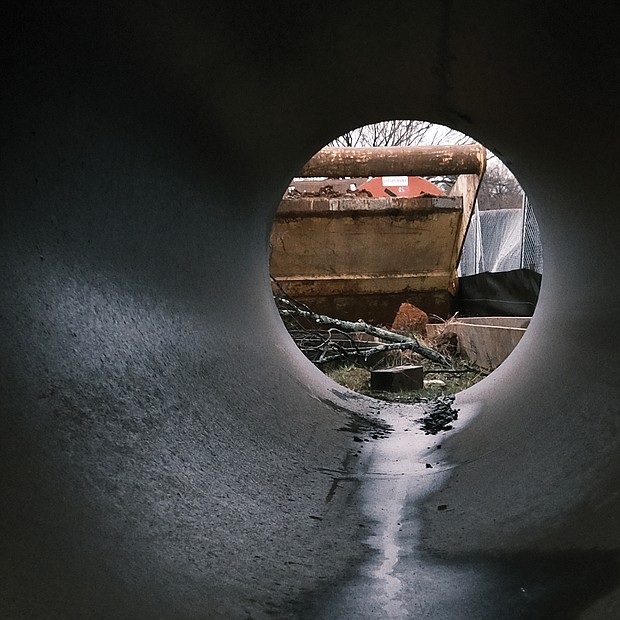 The project is expected to take four years to complete, according to DPU, and is being done in two phases. The first phase, which already is underway, involves replacement of a main reservoir supply line and inlet valve to continue to ensure reliable water distribution, DPU has stated. Cost of first phase: About $6.6 million, including $4.77 million for construction and the rest going to other costs, such as overhead and construction management. The second phase involves installing new aluminum roofs to replace the 1970s concrete roofs that cover the reservoir’s two underground tanks. Total cost of second phase: $47.4 million, which DPU stated is to be shared with Hanover and Henrico counties, which also receive water from the reservoir. 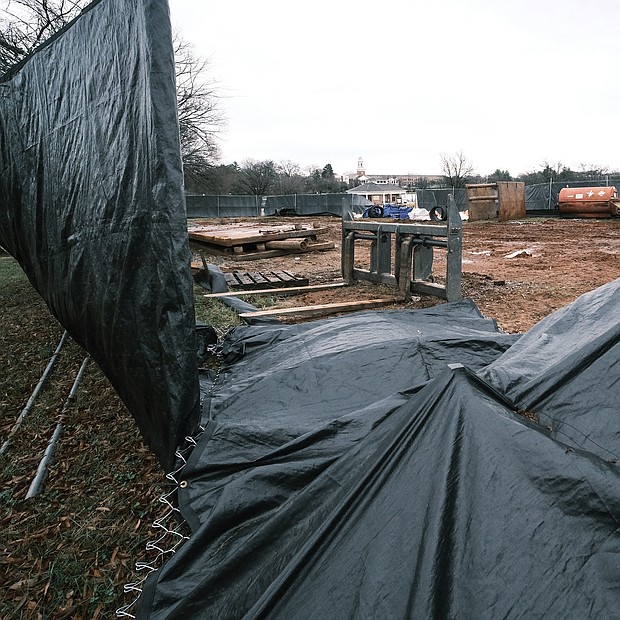 DPU has pledged to schedule the work to ensure the park remains open during the project. In preparing for construction, some trees were removed, DPU noted, but the department has stated that replacements would be planted after the work is done. 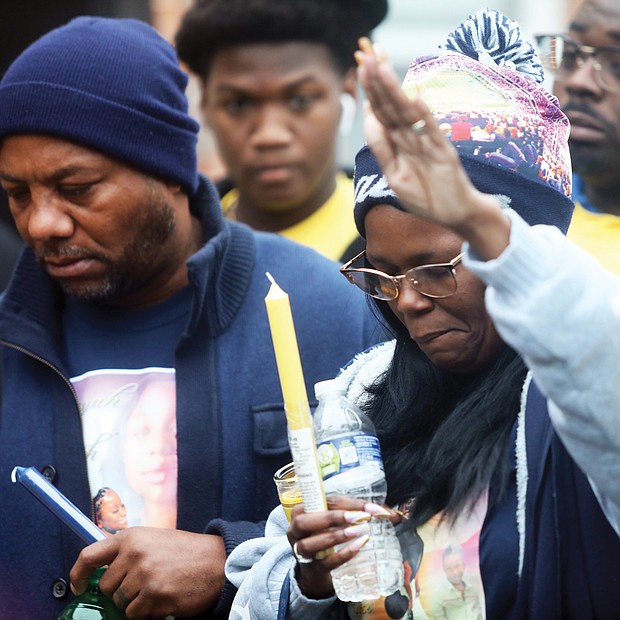 Milton Thompson, left, and Monique Mines-Talley, the parents of 17-year-old Eumiyah Thompson, attend a vigil celebrating the life of their daughter who was shot and killed Dec. 18 while on her front porch of the family’s apartment in Gilpin Court as she was talking with a friend. Her friend was wounded by the gunfire. Eumiyah was a senior at Spartan Academy on West Leigh Street and was expected to graduate in June, her mother said. “That was my baby,” Ms. Mines-Talley said at the vigil held Dec. 27 in Gilpin Court. It was organized by Charles D. Willis, executive director of United Communities Against Crime. Prayers and candles were part of the somber ceremony. 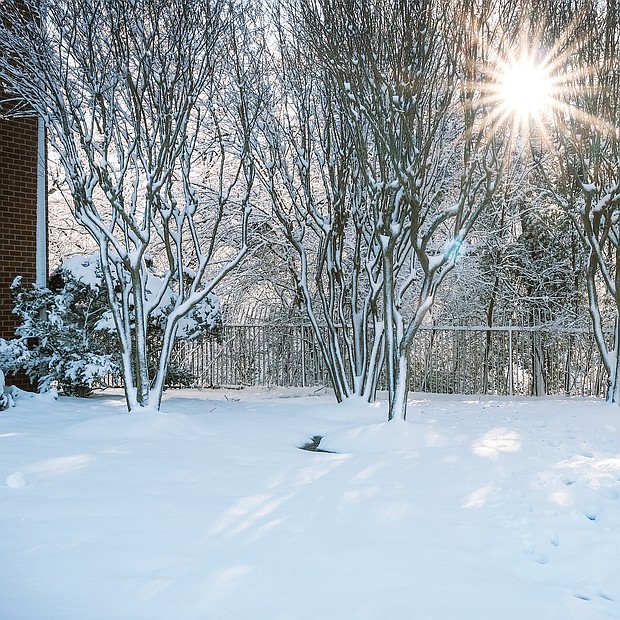