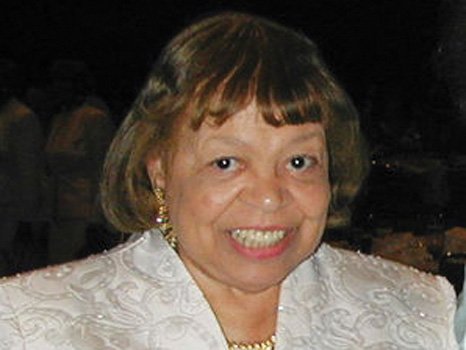 Henrietta A. Morris was known for her faith, a warm smile, a deep passion for helping others and a dogged determination.

“She had a strong faith in God and she loved to serve others,” said her son, Carroll.

Ms. Morris taught school for 24 years. She retired in 1993 from Richmond Public Schools as head of the Vocational Education Department at George Wythe High School.

“She liked helping people, so that’s why she became a teacher,” her son said.

“She was a very kind, very sweet lady, somebody who would get calls from her students from years ago,” he added. “She left a lasing impression on everybody she came in contact with.”

The community is remembering Ms. Morris after her death Saturday, Oct. 25, 2014, at her home in Richmond. She was 86.

Her life was celebrated in a funeral service Monday, Nov. 3, at Ebenezer Baptist Church.

She was a devoted member of Alpha Kappa Alpha Sorority Inc. She joined in 1949 while a student at Virginia State University and remained active for more than six decades. She was the basileus, or president, of Richmond’s Upsilon Omega Chapter from 1987 to 1988 and held several other offices through the years.

“The sorority and church were her passions,” her younger son, André, said.

Ms. Morris was a devout member of Ebenezer Baptist Church in Jackson Ward. She was a trustee and chair of the Worship Committee, a member of the Ladies Guild, Scholarship and World Mission committees and the Drama Ministry.

Ms. Morris began her teaching career at Virginia Randolph High School in Glen Allen until it was closed as part of school desegregation. She taught for several years at the former John F. Kennedy High School, before moving to George Wythe.

She was named Outstanding High School Vocational Education teacher in 1982.

Ms. Morris fought fiercely for the causes she believed in.

During her tenure as basileus of the sorority, the chapter adopted Virginia Union University and established a $250,000 endowment. It also formed partnerships with colleges and universities in the Richmond area to welcome international students. And it monitored City Council meetings to ensure the council adhered to its policy of not conducting business with firms doing business in apartheid South Africa.

She also belonged to Delta Pi Epsilon, a national graduate honorary society for research in business education, and to the Hansel & Gretel Club Inc., serving as a second national vice president for the family association.

In her spare time, she loved reading and playing pinochle. She was a longtime member of two pinochle clubs, the Sociables and the Settyags.

She also volunteered at the Black History Museum and Cultural Center of Virginia in Jackson Ward.

In addition to her two sons, Ms. Morris is survived by two grandchildren and a host of nieces and nephews.