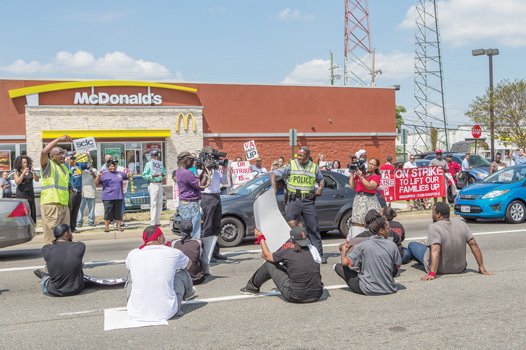 Fast food workers stage a sit-in on Mechanicsville Turnpike in front of the McDonald’s. Their purpose: To highlight their demand for a hike in the $7.25 minimum wage. Fellow activists on the sidewalk hold up signs of support. Photo by James Haskins

Community service, but no jail time for protesting low wages.

That’s the outcome for 10 fast food workers who were arrested for staging a sit-in on busy Mechanicsville Turnpike to call attention to their demand for a hike in the federal minimum wage to $15 an hour.

The six women and four men blocked traffic for more than two hours in front of a McDonald’s restaurant Sept. 4 before Henrico Police arrested them for participating in an unlawful assembly and using public property without consent — both misdemeanors that could have resulted in a 12-month jail term and a fine of up to $10,000.

Wednesday in Henrico County General District Court, Judge Mary B. Malveaux accepted a plea deal worked out between the defendants and the county prosecutor’s office, which appeared to show sympathy for the workers’ efforts to gain a raise from the current minimum wage of $7.25 an hour.

Under the deal, each of the workers pleaded guilty to a misdemeanor of obstructing the free passage of other people.

In exchange, each of the workers is required to perform 50 hours of community service and to pay court costs of $91.

Judge Malveaux gave the workers until May 19 to complete the terms. That’s when she set a formal sentencing hearing to review their status.

The judge noted that the workers’ attorney, David Eberline, has set up a trust fund to accept contributions to help his clients pay the court costs. Anyone can donate.

After the hearing, one of the defendants, Katrina Lewis, 32, said she is glad she took part despite the consequences.

In her view, she and her fellow fast food workers brought attention to the need for an increase in wages with their dramatic sit-in.

“We’re fighting for everyone,” said Ms. Lewis, who works at the Burger King in the 2300 block of Chamberlayne Avenue in Richmond.

Retail and food service workers have been at the forefront of the movement to raise the minimum wage that has spawned protests in Richmond and around the country.

The wave of protests has had little impact on Congress, which has stalled President Obama’s proposal to increase the minimum wage to $10.10 an hour.

The protest movement has had greater impact at the state level. In the Nov. 4 election, voters in four more states approved hikes in the minimum wage within their borders. In all, 26 states now require workers to be paid more than the federal minimum age of $7.25 an hour.