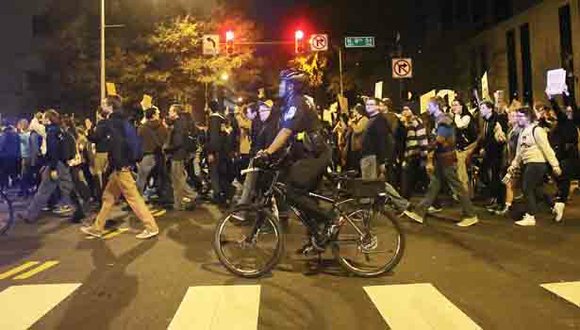 Hundreds of Richmonders took to the streets Monday and Tuesday night protesting a Missouri grand jury’s decision to reject charges against the police officer involved in the slaying of teenager Michael Brown Jr. in a St. Louis suburb. A police officer accompanies throngs of young people marching Tuesday near City Hall in Downtown following a rally. Photo by Sandra Sellars

In a case that spotlights police killings of unarmed African-Americans, a 12-member grand jury refused to indict police officer Darren Wilson for gunning down the unarmed 18-year-old Aug. 9 on a residential street in this St. Louis suburb.

Reaction was immediate in this city of 21,000. People turned out for street protests. Some turned to violence, torching a dozen buildings and two police cars after the panel’s decision was released after 9 p.m. Monday.

The announcement of the grand jury’s decision also spawned largely peaceful protests across the country, including

in Richmond, and left many questioning, “Why is this justice? ”and “What is a black man’s life worth?”

Peaceful protests also were held late Tuesday afternoon at the University of Richmond and in front of the John Marshall Courts Building in Downtown. A crowd estimated at more than 1,000 people turned out to the courts building for speeches, followed by a short looping march past City Hall, to the State Capitol and back to the

courts building. Many were students from VCU, Virginia Union University and UR.

St. Louis County Prosecutor Bob McCulloch triggered the protests when he announced the grand jury outcome. The nine white and three black people on the panel heard from 60 witnesses and forensic experts and reviewed documents before rejecting an indictment, an all too typical outcome in shooting cases involving the police.

Mr. McCulloch never seemed supportive of an indictment, and after announcing the panel’s decision, he appeared to add fuel to the fire of outrage with an extended address justifying the result.

He also surprisingly released 24 volumes of information compiled from the usually secret proceedings.

As Mr. McCulloch read his statement, Michael Brown’s mother, Lesley McSpadden, sat atop a vehicle listening to a broadcast of the announcement.

When she heard the decision, she burst into tears. “Everybody wants me to be calm,” she can be heard shouting to a crowd of supporters in a video uploaded to Facebook late Monday night.

“Do you know how those bullets hit my son?” she is heard to say.

The video shows her anger turning to sorrow. “They still don’t care,” she can be heard saying, before breaking down into sobs. “They’re never gonna care. I’ve been here my whole life.”

In another video, Louis Head, her husband and Michael Brown Jr.’s stepfather, can be seen comforting his wife and then climbing onto the roof of the car, turning to the crowd and repeatedly urging them to “Burn this (expletive) down!” His remarks referred to Ferguson.

Before the decision was announced, the Brown family, along with clergy, local, state and national officials, had urged calm.

“We are profoundly disappointed that the killer of our child will not face the consequence of his actions,” Michael Brown’s family stated in a news release issued the morning after the grand jury decision.

“While we understand that many others share our pain, we ask that you channel your frustration in ways that will make a positive change. We need to work together to fix the system that allowed this to happen.”

Mr. Brown’s father, Michael Brown Sr., who before the decision had urged people to restrict themselves to peaceful protests, also appeared at a news conference Tuesday with the Rev. Al Sharpton and the family’s attorney, Benjamin Crump, but did not speak.

Mr. Brown was wearing a red St. Louis Cardinals baseball cap like the one his son was wearing when he repeatedly was shot by Officer Wilson. The dad also wore a T-shirt with the slogan “No Justice No Peace.”

“You have broken our hearts, but you have not broken our backs,” Rev. Sharpton said. “We are going to continue to pursue justice,” citing hopes that the U.S. Justice Department eventually might bring a federal case against the officer for violating the teen’s civil rights.

The family also could pursue a wrongful death suit in civil court.

“We could foresee what the outcome was going to be, and that’s exactly what occurred last night.”

The family statement urged protesters to channel their frustration into a campaign for body cameras to be worn by every police officer on a patrol in the United States.

Ferguson police, bolstered by the Missouri National Guard, were unprepared for the reaction, despite more than a week to get ready.

Chief Belmar acknowledged the violence late Monday night and early Tuesday morning was “much worse” than the disturbances that erupted in the immediate aftermath of the shooting of Mr. Brown.

While most of the damage was in and around Ferguson, the church that Michael Brown Sr. attends outside Ferguson also was destroyed by arson. He had been baptized Sunday at Flood Christian Church in a rural area of St. Louis County distant from Ferguson.

The pastor, the Rev. Carlton Lee, said he believes the sanctuary was torched because he had been outspoken in calling for the arrest of Officer Wilson.

Shortly after the grand jury decision was announced, President Obama issued his own appeal for calm in a nationally televised address. “There is never an excuse for violence,” he said.

“But what is also true is that there are still problems, and communities of color aren’t just making these problems up,” the president said. “Separating that from this particular decision, there are issues in which the law, too, often feels as if it is being applied in a discriminatory fashion.”

As the president spoke Monday night, fires erupted in the Ferguson business district, and several networks went to

The Ferguson case highlights the nation’s long-standing racial tensions and sparked calls for more vigorous and just responses to police brutality and changes to a criminal justice system that unfairly targets African-Americans.

Missouri Gov. Jay Nixon was criticized for a heavy-handed response after he declared a state of emergency a week before the grand jury’s decision was announced and activated the National Guard to mobilize in Ferguson. He sent in more troops Tuesday in the wake of the violence.

Neither he nor anyone else could explain why the grand jury decision was released well after dark. Nor could the governor explain why the National Guard was not fully deployed in Ferguson until buildings and autos on a car lot in at least one nearby community, Dellwood, were set ablaze — leaving small businesses in sooty shambles.

Most businesses in Ferguson had been boarded up, anticipating looting. Schools in Ferguson and its surrounding cities stayed closed Tuesday. School officials had urged that the decision be released on the weekend.

St. Louis police reported heavy gunfire late Monday in the area near where Mr. Brown was slain, but Chief Belmar said officers did not fire a shot even after they were pelted with rocks, bottles, batteries and other debris.

Supporters of Michael Brown Jr. “just want the police to be held accountable, to treat us like Americans, too, so we can get equal justice,” Mr. Crump said on CNN. “This system always allows police to hurt and kill our children. We’ve got to change that dynamic.”

Attorneys for Officer Wilson, who has been on paid administrative leave since the shooting, said he was following his training and the law when he shot Mr. Brown.

“We recognize that many people will want to second-guess the grand jury’s decision. We would encourage anyone who wants to express an opinion do so in a respectful manner,” Mr. Wilson’s legal team urged in a statement.

There are numerous reports that Mr. Wilson is in talks about resigning from the force.

Mr. McCulloch declined to say if the decision from the seven men and five women on the grand jury panel was unanimous. At least nine jurors would have needed to agree to indict in order for Officer Wilson to be charged.

Critics had called for Mr. McCulloch to be removed from leading the prosecutorial effort because of bias. His father, a police officer, was killed in the line of duty by an African-American man. In addition to his father, Mr. McCulloch’s

mother, brother, uncle and cousin have worked for the St. Louis Police Department.

Mr. Brown’s family, and witnesses to the death, have asserted the teen had his hands up and was trying to surrender when Officer Wilson fired the fatal shot into his head. Transcripts of Officer Wilson’s testimony claim Michael Brown Jr. put the officer in fear of his life and forced him to shoot to defend himself.

Mr. McCulloch said witnesses disagreed on whether the teen’s hands were up at the time he was shot. He said Officer Wilson shot at Mr. Brown 12 times, hitting him seven times. The final shot hit him in the top of his head.

Mr. Brown was seen minutes before the shooting in a videotape stealing cigars from a nearby convenience store. He pushed aside a store employee who confronted him, then walked out the door.

An autopsy revealed he also had marijuana in his system at the time of the shooting.