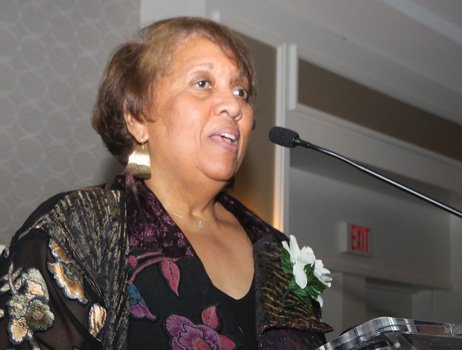 The “struggle continues for an equal education for all.”

Using the NAACP mantra of “the struggle continues,” Dr. Bedden told the audience of 250 that public education is facing major challenges in trying to reach the “kids at the back of the class.”

Education is the way up for poor children, he said. But resources for important elements of education, including art and physical education, are being stripped away both locally and nationally. That must change, he said, to enable public schools to prepare young people for success in life.

The event, held last Friday at a Downtown hotel, included the posthumous presentation of the organization’s Civil Rights Award to Raymond H. Boone, the late founder, publisher and editor of the Richmond Free Press.

Jean P. Boone, current publisher of the award-winning newspaper, accepted the award for her husband, who succumbed to cancer in June.

“My husband would be so pleased to receive this tribute,” Mrs. Boone said, recalling that Mr. Boone began his lifelong commitment to the NAACP as a teenager when he founded and led the Suffolk youth chapter of the civil rights organization.

“He was the epitome of a believer in the importance of education. He believed in justice. He believed in doing what is right,” Mrs. Boone said. “And he believed all of us have a role to play to make this a better Richmond, a better state and a better country.”

In his address, Dr. Bedden expressed dismay at what he sees as the continuing erosion in the trust and commitment to public education and its role in enabling new generations to achieve the American dream.

America cannot afford to continue to have one-fifth of high school students drop out before graduation, he said. He expressed concern that African-American, Hispanic and economically disadvantaged students represent the highest percentage of dropouts.

While the nation espouses a “no child left behind” philosophy, the reality is that “certain children are left behind,” he said.

He challenged the NAACP to make support of public education a top priority in pursuing equality for the next generation.

The event was emceed by veteran TV anchor and reporter Cheryl Miller and featured the vibrant, upbeat singing of FM Stereo, an a capella student group from Richmond’s Franklin Military Academy. They performed under the direction of Daniel Fox.