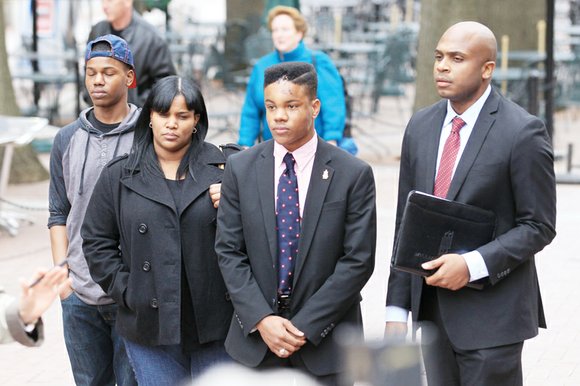 University of Virginia student Martese Johnson, center, stands with his attorney, Daniel Watkins, right, and his mother, Dychea, and older brother, Michael, last Thursday at a news conference before his attorney read a statement from the honors student about his arrest.

Bloodied University of Virginia student Martese Johnson is held down by an ABC agent after being slammed to the ground last week outside a Charlottesville pub.

The photo of Martese Johnson lying dazed, bloodied and bruised on the pavement is almost iconic.

Blood streams like huge tears from the gash on his forehead and covers his face. His shirt is saturated with blood.

The gruesome image of the University of Virginia honors student was captured in photographs and by video only seconds after he was slammed to the ground by state Alcoholic Beverage Control agents outside a Charlottesville bar last week on St. Patrick’s Day.

The images, posted on the Internet, have gone viral — drawing fire from people across the nation as yet another example of unwarranted police brutality unleashed against a young black male.

This time, in Virginia, it’s closer to home.

Gov. Terry McAuliffe asked Secretary Moran to conduct an independent investigation of the incident with the Virginia State Police.

The governor followed that Wednesday with a formal, executive order requiring the retraining of all ABC agents in “use of force, cultural diversity, effective interaction with youth and young adults, and community policing” by Sept. 1.

His order also calls for an “expert review panel,” made up of local and campus law enforcement agencies and sheriff’s offices, to complete a review of the ABC and to make recommendations for additional changes by Nov. 1.

“Threats to student safety must be addressed, whether the sources of the danger is external or internal,” said university Rector George K. Martin in a statement issued Tuesday.

“We will obviously wait to see what the state investigation yields, but we do not want to pick up a newspaper ever again to see a picture of one of our students with a bloody face. That should not happen.”

University President Teresa Sullivan said in a statement, “Today, as U.Va. students, faculty and staff who share a set of deeply held values, we stand unified in our commitment to seeking the truth about this incident. And we stand united in our belief that equal treatment and equal justice are among our fundamental rights under the law.”

The Virginia Legislative Black Caucus issued a statement saying its members were outraged by the incident.

“These actions by the ABC officers are appalling and totally unacceptable,” the Caucus stated. “We applaud the actions of President Teresa Sullivan and the University of Virginia Community for coming together to condemn the actions against this student.”

The Caucus also expressed appreciation to the governor for calling for the State Police investigation.

Mr. Johnson, a 20-year-old, third-year student from Chicago, had been denied entry to the Trinity Irish Pub located a few blocks from the U.Va. campus because of his age.

Kevin Badke, co-owner of the pub, said Mr. Johnson was polite and cordial after he was denied entry, when two Virginia ABC agents came up and grabbed him.

A witness said a startled Mr. Johnson initially tried to pull away from officers, who then wrestled him to the ground, knees pressed against his back.

On a video posted on YouTube, an agent can be heard telling him to stop fighting. On the ground with his head and face bloodied, Mr. Johnson is shouting to the officers: “I go to U.Va.! I go to U.Va.!”

He was handcuffed, arrested and charged with two misdemeanors — obstruction of justice without force and public swearing or intoxication.

In an arrest report, Mr. Johnson was described as “very agitated and belligerent.” But the bar’s co-owner has contradicted that assessment.

A Breathalyzer test showed Mr. Johnson was not intoxicated. It took 10 stitches to close the gash on his head.

Mr. Johnson will plead not guilty at a scheduled court appearance Thursday, March 26, said his attorney, Daniel Watkins of Richmond’s Williams Mullen law firm. There’s also a question about whether charges against him will be dropped at some point.

Mr. Johnson stood by at a news conference March 19, the stitches visible in his head, as his statement was read by Mr. Watkins. He said he was “shocked that my face was slammed into the brick pavement three blocks from where I attend school. I trust that the scars on my face and head will heal, but the trauma from what the ABC officers did will stay with me forever.”

He said his “head lay bloody, but unbowed,” and he urged calm.

The incident has galvanized a large and diverse group of supporters for Mr. Johnson, who serves as leadership development chairman for the university’s Black Student Alliance.

About 200 African-American students stormed out of a forum with the Charlottesville police chief last Friday designed to quell tensions on campus.

Chanting “Black lives matter!” they argued that their questions over Mr. Johnson’s arrest were not being addressed. A panel of seven law enforcement, state and federal officials led the forum. They said they were hesitant to discuss specifics of the incident because the investigation is ongoing.

“We have nothing to lose but our chains,” shouted Aryn Frazier, a leader of the demonstrations.