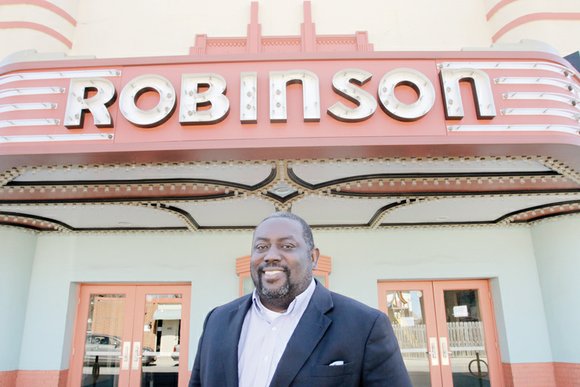 Pastor Donald Coleman stands in front of the Robinson Theater Community Arts Center, where the East End Fellowship he co-founded in 2008 worships each Sunday. Photo by Sandra Sellars

Pastor Donald Coleman has a resurrection message he likes to share with young people who are mired in tough circumstances.

“I tell them I once was where they are, and if I can overcome it with God’s help, they can, too,” said Pastor Coleman.

He is the lead pastor at East End Fellowship, a multiethnic Christian congregation of about 100 people whose mission is spiritual empowerment and racial reconciliation in Church Hill. He also has served on the Richmond School Board since 2008 and is in his second term as board chairman.

Pastor Coleman, 54, tells a Free Press reporter how he was raised with four siblings in the Creighton Court public housing community in Church Hill until age 7. He and his siblings then were placed in foster care as his parents fell deeper into substance abuse.

Pastor Coleman said he is grateful that his foster parents — George and Lottie Byrd — insisted he attend church and laid the spiritual path that he follows to this day.

“My foster parents insisted that we get on our knees and say ‘The Lord’s Prayer’ each night before we went to bed,” Pastor Coleman recollects. “That prayer shaped my life.

“My faith is the cornerstone of all I am,” he said last Sunday afternoon, prior to Palm Sunday services at East End Fellowship.

The congregation worships at the Robinson Theater Community Arts Center at 2903 Q St. and has offices across the street.

Pastor Coleman also recalls how two teachers at Armstrong High School — Nelson Colbert and James Bynum, who are now retired — served as father figures to him while he was a student there. “They were strong African-American men who encouraged me to be the best I could be,” Pastor Coleman said.

Pastor Coleman said he made good grades in school and “decided early on I wanted to do right.”

He said some of his friends teased him by calling him “Honest Don.”

Pastor Coleman graduated from Armstrong in 1979. He said after his junior year at Virginia Commonwealth University, he left school when he felt the call to become a minister.

“All my life, I had a sense that I would serve people,” he said.

Since then, he has worked a few full-time jobs and served in several ministerial positions, most recently as an elder and minister with the Church of the Nations in Richmond.

In February 2008, he co-founded East End Fellowship with the Rev. Corey Widmer, pastor at Third Church in Henrico County, with the intent of ministering to the nearby community.

“He’s the reason our church is able to reach so many different people in this community,” said Liz Denison, the church administrator, of Pastor Coleman. “He’s always pressing us to go beyond our comfort zone. He can relate to people from high levels to those on the streets.”

Looking back, Pastor Coleman said the biggest hurdle he had to overcome was to question why his parents relinquished custody of him to his foster parents. “Why am I not loveable?” he said he would ask himself. “Is it something I did wrong?”

He briefly moved back in with his father during his late teen years and said his mother later gave her life to the Lord and turned her life around.

He and his wife of 32 years, Florence, have raised two children, now adults — Shekinah Mitchell and Selah Donetta, a sophomore at Old Dominion University.

“My wife has supported me in all ministry endeavors and is critical to whatever success I have obtained,” he said.

He’s optimistic about what the future holds for him and the city he serves.

“I love this city,” Pastor Coleman said. “I believe Richmond is on the brink of greatness.

“I consider myself a son of the city for all it has done to help me through some very challenging times in my life,” he added. “I want to serve in whatever capacity I can to see Richmond be all it can be.”