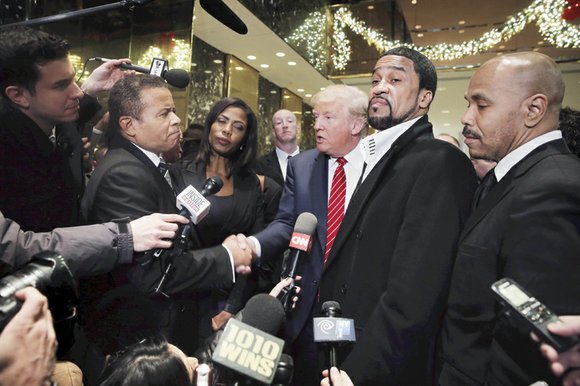 Stephen A. Parson Sr., the embattled senior pastor at the Richmond Christian Center who is on leave as his South Side church tries to emerge from Chapter 11 bankruptcy, was among a contingent of 100 African-American ministers who met Monday with Republican presidential front-runner Donald Trump at Trump Plaza in New York City.

Pastor Parson, a longtime Republican, is endorsing Mr. Trump. He also told the Free Press he is leading a group of African-American and Latino ministers who are supporting Mr. Trump’s candidacy.

He said that his work with the Virginia Black and Latino Leaders Coalition is being done on a voluntary basis and that he is not being paid to lead the group.

The Free Press contacted the Trump campaign to confirm that, but received no reply by press time on Wednesday.

“As a billionaire businessman, (Mr. Trump) knows how to create wealth, and he can help bring much-needed jobs to African-Americans who are struggling for economic security in the inner city,” Pastor Parson said of his backing of Mr. Trump during a phone interview Monday after the New York meeting concluded.

Pastor Parson appeared Tuesday morning in an interview with Roland Martin, host of TV One’s “NewsOne Now,” where he struggled to identify specific policies that Mr. Trump had provided at the meeting that would bring more jobs to African-Americans, address educational inequities or improve relations with police in the light of the continued killings of African-Americans by white police officers.

Pastor Parson and Richmond Christian Center, the church he founded in 1983, have undergone financial troubles tied to the church’s bankruptcy that began in 2013.

Pastor Stephen A. Parson Sr. of the Richmond Christian Center points to Donald Trump’s book, “Why We Want You to be Rich: Two Men, One Message,” co-authored with Robert Kiyosaki, as he talks to members of the media Monday in New York before the meeting of about 100 African-American ministers with the GOP candidate.

However, church members have indicated that Pastor Parson would be invited to take over the pulpit if the church can emerge from bankruptcy, which is still questionable.

During his interview with Mr. Martin, Pastor Parson said Mr. Trump has written books about “why we want you rich.”

Bishop Orrin Pullings of United Nations Church International in South Richmond, who identified himself as a Democrat, also attended the New York meeting, but told the Free Press Tuesday he is not backing Mr. Trump.

Bishop Pullings said he left the meeting unsatisfied with Mr. Trump’s tepid responses as to why he has used inflammatory rhetoric against African-Americans, women, immigrants, handicapped people and others during his campaign. He also wanted an account from Mr. Trump as to why some of his campaign supporters roughed up a Black Lives Matter demonstrator while removing him from a recent rally in Birmingham, Ala.

Mr. Trump kicked off his campaign with a speech in which he said some Mexican immigrants are rapists and criminals, and recently drew criticism for retweeting an image of inaccurate statistics that vastly overrepresented the number of white people killed by black people, among other errors. He also said after the incident involving the “Black Lives Matter” demonstrator, “Maybe he should have been roughed up because it was absolutely disgusting what he was doing.”

“His insensitivity toward the minority communities is really a big concern of mine,” Bishop Pullings said.

Longtime Republican Joe Ellison, pastor of the newly formed City Park Church in Henrico County, and Bishop Leon Benjamin of New Life Harvest Church on South Side also said they were invited to the meeting.

Rev. Ellison said he chose not to attend because of “conflicting reports about the purpose of the meeting.”

Bishop Benjamin declined to say why he did not attend the meeting.

In the controversial buildup to the Monday meeting, Mr. Trump first claimed that 100 black ministers and evangelical leaders would endorse his candidacy after the meeting.

That raised the hackles of some of the invitees, who said they planned to attend the meeting to challenge Mr. Trump on his racially incendiary statements. Mr. Trump then backtracked and said the meeting was designed as a forum for him to answer the questions and concerns of the African-American pastors.

In a letter published by Ebony magazine, more than 100 black religious leaders wrote that “Trump’s racially inaccurate, insensitive and incendiary rhetoric should give those charged with the care of the spirits and souls of black people great pause.”

They also expressed concern that Monday’s gathering would “give Trump the appearance of legitimacy among those who follow your leadership and respect your position as clergy.”

During the meeting, Bishop Pullings said he and about 30 ministers sat at a conference table with Mr. Trump, surrounded by dozens of other pastors.

He said some of the ministers were upset that Mr. Trump has made racially charged remarks during the campaign and mocked a disabled New York Times reporter at a rally last week.

“We asked him why he wouldn’t apologize for any of the remarks he has made and if he planned to issue any apologies,” Bishop Pullings said.

He said before Mr. Trump could speak, Omarosa Manigault, who became an ordained minister in 2012 after she gained fame as a contestant on “The Apprentice,” Mr. Trump’s reality TV show, “stepped in” and said, “He doesn’t need to say anything, he’s leading in the polls.”

Bishop Pullings said he can’t understand why Mr. Trump “feels like he needs to be demeaning” to people.

“As a president, he would need to have more sensitivity on how to deal with common people,” he said.

“I’m going to speak with Hillary Clinton now,” he said.

Bishop Pullings said he doesn’t believe Mr. Trump changed the minds of any pastors at the meeting who are “sitting on the fence” politically.

Pastor Parson downplayed the bevy of controversies Mr. Trump has stirred up since running for the Republican presidential nomination. “All the stuff they’re jumping on is to help start a controversy to bring him down,” he said.

He said he has spoken with several black pastors who said they would like to publicly endorse Mr. Trump, but are afraid of the backlash they would receive from their colleagues and congregation members.

“Most of them have the Democratic Party mindset,” Pastor Parson claimed. “If you’re black, you have to support the Democrats. If you come out for Donald Trump, you get attacked.

“Some just aren’t ready for that type of attack,” he continued. “They can’t get their members upset because most churches are dependent on their members giving them money.”

In an interview after the meeting, Mr. Trump, joined by Pastor Parson, Ms. Manigault and a handful of other ministers, described “great love in the room” and a wide-ranging, two-hour discussion of black unemployment, increased training for police officers and the deficiencies of urban education. “They liked me, and I like them,” Mr. Trump said.

He added, “I’ve had many endorsements today,” without providing any specifics.

Cleveland-based Pastor Darrell Scott, who spoke on behalf of the group, described the meeting as “very constructive.”

“We’ve had meaningful dialogue with Donald Trump,” he said, adding many of the pastors planned to return to their homes and pray while they deliberate on whether to endorse him.

Before Monday’s meeting, the Rev. Corletta J. Vaughn of Detroit saw her name on a flier touting her endorsement and that of the 100 ministers invited to the meeting. She said she was shocked.

“You’ve got to be kidding me,” Rev. Vaughn, senior pastor at the Holy Spirit Cathedral of Faith, said she remembered thinking when she saw the document. “That would kill me. My constituency would murder me. There is no way in the world I can do that.”