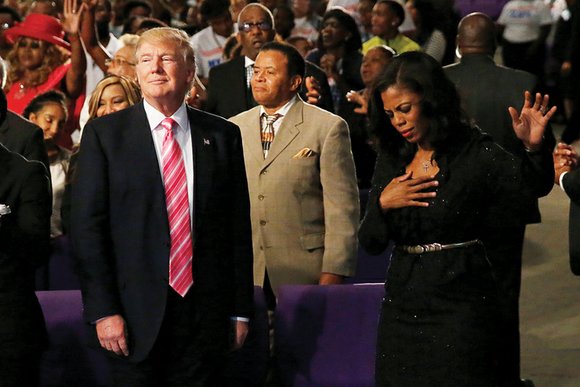 Republican presidential nominee Donald Trump, left, is accompanied by Steve Parson of Richmond and Omarosa Manigault, former contestant on “The Apprentice” and director of African-American outreach for the Trump campaign, during his visit last Saturday to an African-American church in Detroit. Carlo Allegri/Reuters

Republican presidential candidate Donald Trump stepped up his bid to win over minority voters by addressing a largely black church in Detroit last Saturday and calling for a new civil rights agenda to support African-Americans.

As scores of protesters outside chanted “No justice, no peace,” Mr. Trump said he wanted to make Detroit, a predominantly African-American city that recently emerged from bankruptcy, the economic envy of the world by bringing back companies from abroad.

Mr. Trump separately met with about 100 community and church leaders, his campaign said, in his latest push to peel away minority voters from Democratic candidate Hillary Clinton.

His outreach to minorities over recent weeks comes as he seeks to improve his chances in the Nov. 8 election and shake off months of offending the sensibilities of African-American and Latino voters with his hard line on immigration and rough-hewn rhetoric.

“I fully understand that the African-American community is suffering from discrimination and that there are many wrongs that must still be made right,” Mr. Trump said at the church, which was half full. “I want to make America prosperous for everyone. I want to make this city the economic envy of the world, and we can do that.”

His address of more than 10 minutes at the Great Faith Ministries International church received moments of applause, including when he said Christian faith is not the past, but the present and the future.

Accompanying Mr. Trump to the church was Dr. Ben Carson, the former Republican presidential hopeful and retired neurosurgeon who grew up in Detroit and whose childhood neighborhood Mr. Trump visited last Saturday.

Also with him was Steve A. Parson Sr., founding pastor of Richmond Christian Center. Mr. Parson was ousted from the church early last year among allegation’s that he mismanaged funds of the once 3,000-member congregation.

Mr. Trump has argued that his emphasis on job creation would help minority communities in a way that Democrats have failed.

Speaking to the Free Press on Tuesday, Mr. Parson described the church service as “absolutely wonderful,” and said he enjoyed Mr. Trump’s comments.

“Trump is bringing back black inner cities all across America by introducing empowerment and not entitlement programs,” said Mr. Parson, who oversees the Virginia African-American Coalition for Trump, which he said includes about 20 local pastors. He’s also a member of the National Diversity Coalition for Trump.

He said Richmond, as the former capital of the Confederacy, is the perfect place to start programs to build wealth.

“Jackson Ward was known as ‘Black Wall Street’ in the 1920s,” he said. “It was one of the most affluent neighborhoods in the United States.

“So when Trump says he wants to ‘make America great again,’ he means returning our communities — even Richmond — to their heyday.

“Wealth is financial independence,” Mr. Parson continued. “That is what the African-American community needs, and that’s what Donald Trump stands for. We will be ‘abundantly provided for’ as the Bible says … Donald Trump will do that for us.”

Emma Lockridge, 63, said as she entered the church that she found his comments about Mexicans and Muslims “hateful.”

But she said she also had concerns about Mrs. Clinton’s support in the 1990s for crime legislation signed by her husband, former President Bill Clinton, which many African-Americans say contributed to high incarceration rates in their communities.

Vicki Dobbins, an activist protesting outside, said she was disappointed the church asked Mr. Trump to speak.

“I believe that Trump coming to Detroit is a joke, and I’m ashamed of the pastor who invited him,” she said. “In my opinion, he stabbed everyone in the back.”