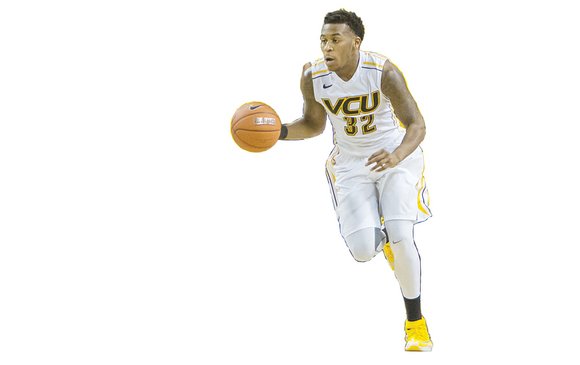 VCU is hoping his sharpshooting trend continues next Tuesday when the Rams travel to Atlanta to play ACC member Georgia Tech in a 9 p.m. tipoff on ESPN2.

The Rams are 5-3 after a 76-71 loss Sunday at Atlanta’s Philips Arena to another ACC school, Florida State University, on ESPNU.

In defeat, Johnson hit eight three-pointers en route to 36 points. It was arguably the top offensive outburst in program history, considering the level of competition.

VCU’s Division I record for the most points in a game was set in 1989, when Chris Cheeks burned the nets for 42 points against Old Dominion University.

Johnson, a 6-foot-4 senior out of St. Benedict’s Prep in Newark, N.J., is averaging 19.9 points while hitting 33 of 69 bonus tries. Before attending St. Benedict’s, he was a student at the now-closed Rice High School in Harlem.

Earlier this season, Johnson had 20 points in the 79-71 loss to defending NCAA champion Duke University in the 2K Classic at Madison Square Garden in New York on ESPN2.

Johnson followed with 21 points in VCU’s 74-73 loss to defending national runner-up, the University of Wisconsin, in the 2K Classic third-place game.

The New Yorker has 1,190 career points with 208 treys as he climbs the Rams’ all-time leader statistics. He’s on pace to catch B.A. Walker (269 career threes) as VCU’s all-time marksman beyond the arc.

Johnson is one of just two seniors on the team, along with Korey Billbury, the Oral Roberts University transfer who averages 11 points and six rebounds per game.

The VCU-Georgia Tech game will be at McCamish Pavilion (formerly Alexander Coliseum), once the home of the NBA Atlanta Hawks.

Georgia Tech, 6-2, will become VCU’s third ACC foe of the year, with more tough games on the horizon before Atlantic 10 play commences in January.

On Dec. 19, VCU returns home to play host to 8-1 University of Cincinnati in a 4 p.m. Siegel Center game to be televised by CBS-SN.

It will be a homecoming for Troy Caupain of Cosby High School in Chesterfield, who averages 11 points a game for the Bearcats while leading the team in assists and steals.

The program has grown up in a hurry.

Old-timers recall as recently as 1979 that the Rams were almost never on TV and were playing the likes of Methodist and Southeastern before mostly empty seats at the tiny Franklin Street Gym.

The Rams will play Nov. 23-26, 2016, in Battle 4 Atlantis at Paradise Island, The Bahamas. Michigan State, Louisiana State and Louisville are among other entries. In November 2017, VCU will travel to Hawaii to play in the prestigious Maui Invitational.