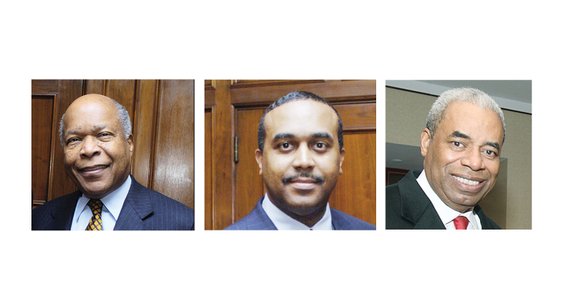 That is just one of the achievements of the pioneering 81-year-old physician, educator and health

advocate whose autobiography, “Breaking Ground: My Life in Medicine,” was just named the winner of the 2015 NAACP Image Award for nonfiction.

Other big winners at the civil rights organization’s 46th annual awards ceremony were the movie, “Selma,” and the new ABC television sitcom “black-ish.”

Oprah Winfrey, who was a “Selma” producer and appeared in it, accepted the trophy for outstanding motion picture at the ceremony last Friday in Los Angeles.

“This is more than a movie,” Ms. Winfrey said.

“It’s important that we all know who we are so we know where we’re going, and claiming the glory.”

Anthony Anderson, who won the award for best comedy series actor for his role in the sitcom “black-ish,” hosted the awards ceremony. The sitcom also captured a best actress trophy for Tracee Ellis Ross.

Dr. Sullivan’s book chronicles his rise in the Jim Crow South to become a physician, the founding dean and later president of the Morehouse School of Medicine in Atlanta and the U.S. secretary of health and human resources in the cabinet of President George H.W. Bush.

Along with recounting his career, Dr. Sullivan also mentions his ties to Richmond, including his relationship with Dr. Frank S. Royal, a Richmond family physician and influential Republican, and the start of the Virginia-Nebraska Alliance (V- NA) in Richmond, under the direction of Terone B. Green, to help increase African-American interest in health care careers. In his book, Dr. Sullivan credits Dr. Royal, longtime chairman of Meharry Medical College in Nashville, Tenn., with submitting his name to President Bush to help Dr. Sullivan secure the cabinet appointment.

The creation of the alliance grew out of a private commission Dr. Sullivan led that spotlighted the decline of African-Americans in the health care workforce.

He was able to secure partners in Virginia to create the alliance, a university consortia to reverse the trend. The VNA includes four of the state’s historically black colleges and universities, medical schools in Virginia and Nebraska and other

schools that participate in the effort.

Since then, the V-NA has become part of the Northern Virginia-based Sullivan Alliance to Transform the Health Professions, which has worked to develop similar university consortia in Alabama, Florida, Maryland and Ohio, and is looking to do so in other states.

Taraji P. Henson, star of the new Fox television hit “Empire,” was a double winner. She was named best actress in a movie for “No Good Deed” and entertainer of the year.

Spike Lee received the NAACP President’s Award, which recognizes those who have combined career success and public service. In his speech, the filmmaker addressed the obstacles facing black people.

He said he was honored to carry on the U.S. Justice Department’s legacy that included ensuring “the most sacred of American rights — the right to vote.” Mr. Holder, who is leaving the job after six years, called on the nation to “reject the forces of hate and division.”