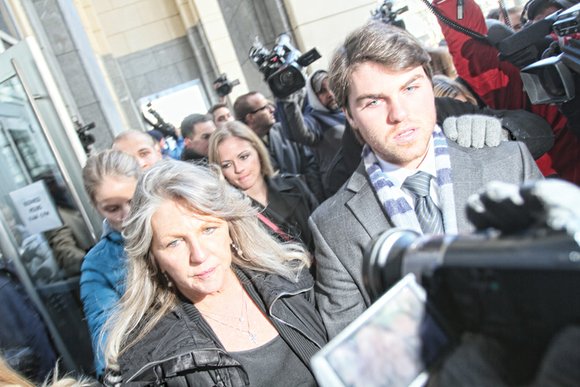 Maureen McDonnell walks through a bevy of media as she leaves the federal courthouse in Downtown with her son, Bobby, and daughter, Rachel, after her sentencing last Friday Photo by Sandra Sellars

Former Virginia First Lady Maureen McDonnell broke a two-year silence on her role in the federal corruption case that rocked Virginia and sent shockwaves across the nation.

Fighting back tears, she read from a prepared statement during her sentencing hearing last Friday before U.S. District Judge James R. Spencer.

“I am the one who opened the door, and I blame no one but myself,” she said, acknowledging that she was responsible for bringing former Star Scientific CEO Jonnie Williams, whom Judge Spencer had called “a serpent,” into the Execu- tive Mansion.

“And the venom from that snake has poisoned my marriage, has poisoned my family and has poisoned the common- wealth that I love,” she said. “I would give anything to turn back the clock and live these events over with the knowledge I now have.”

The relationship Mrs. McDonnell and her husband, former Gov. Bob McDonnell, had with Mr. Williams ultimately proved the couple’s undoing.

They were convicted in September on federal corruption charges for taking more than $177,000 in gifts and loans from Mr. Williams in exchange for giving him access to state officials to promote his company’s dietary supplement.

Mr. McDonnell was convicted on 11 counts and sentenced in early January to two years in federal prison followed by two years’ probation.

Mrs. McDonnell was convicted on nine felony counts, which later were reduced to eight.

Concluding the more than three-hour hearing that was punctuated by the testimony of eight character witnesses, including the McDonnells’ daughter Rachel, Judge Spencer sentenced Mrs. McDonnell to one year and one day in federal prison.

The additional day allows her to reduce her prison time by up to 15 percent — or 54 days — for good behavior.

He also ruled the former first lady could remain free on bond pending the outcome of her appeal of her conviction.

While Mr. McDonnell had been scheduled to report to prison by Feb. 9, the 4th U.S. Circuit Court of Appeals ruled that he could remain free on bond during his appeal.

Arguments in his appeal are scheduled for May 12 before a three-judge panel. Legal briefs are due March 2.

Judge Spencer spoke for about five minutes before rendering Mrs. McDonnell’s sentence in a packed courtroom.

He called the case “sad, tragic and puzzling.”

He spoke of the “good Maureen and the other Maureen.”

He said he had been swayed by scores of letters and character witnesses that Mrs. McDonnell had done a lot of good in her life, but said he felt compelled to give her prison time because he had sentenced her husband to serve time.

She is the first former first lady of Virginia to be convicted of a felony and sentenced to prison.

The McDonnells exchanged a brief hug following her sentencing, then spent the rest of their time separately hugging other family and friends.

“We still believe in Maureen’s innocence, and we intend to seek her complete vindication,” Randy Singer, one of her attorneys, said.