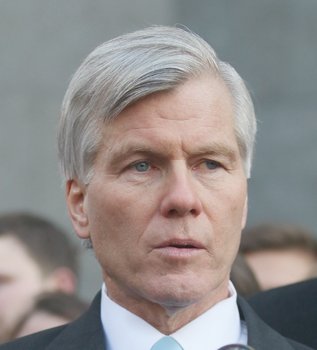 Former Gov. Bob McDonnell will remain free on bond while he appeals his conviction on corruption charges.

In a win for the one-time Republican star, he will not have to report to prison in two weeks to start his two-year sentence.

That’s the result of Monday’s order from the 4th U.S. Circuit Court of Appeals. The order approved the request from Mr. McDonnell’s legal team for him to remain free while his jury conviction is challenged.

The two-page order also took a slap at U.S.Judge JamesR.Spencer,whopresided over the McDonnell trial.

Unlike Judge Spencer, the appellate court found the McDonnell appeal would raise a “substantial question of law” that could result in a new trial or an outright reversal of his conviction.

Despite his conviction, the former governor maintains he did not sell his office in exchange for expensive gifts and loans from corporate executive Jonnie Williams, who was seeking the governor’s help to pump up interest in his dietary supplement business.

Mr. McDonnell and his wife, Maureen, were found guilty in September of accepting $177,000 in gifts and loans from Mr. Williams.

One of the key questions the defense raised throughout was whether the former governor did anything that could be called an “official act” in exchange for the largesse.

Essentially, the intervenors argue that Judge Spencer pushed an overbroad interpretation of federal law in instructing the jury and instead should have found the government failed to prove that Mr. McDonnell or his wife, Maureen, had done anything official to further Mr. Williams’ business.

The former attorneys general wrote that none of the favors done by the McDonnells for Mr. Williams, including a party at the Executive Mansion, could be considered an “official act” and “are persuaded that federal law does not criminalize the alleged acts” on which the convictions are based.

“Whatever criticism might be made” of the former governor giving access to Mr. Williams, the attorneys general wrote that his actions fit with “long-established practices” that should “not become grounds for federal prosecution.”

The appeals court ordered the case to move quickly. Both sides must submit their written arguments on specific dates in March and April, with oral arguments scheduled for May 12 in Richmond.

Those arguments will be heard by a three-judge panel, which could include the judges who granted bond to the former governor.