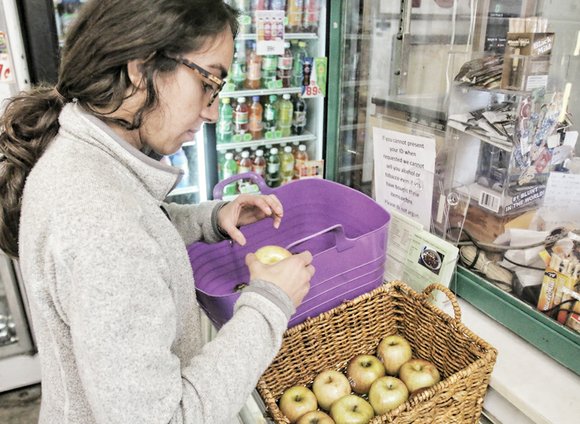 An urban garden that started out selling fresh produce and fruit at discount to two Richmond convenience stores will grow to serve 13 stores by this summer.

But Tricycle Gardens wants to be more than a fresh food provider for Richmond’s food desert pockets. The nonprofit farm wants to be a magnet for grocery stores and farms in those pockets by highlighting the demand for fresh foods.

The single-acre farm at 9th and Bainbridge streets in Richmond’s South Side sells 70 to 140 pounds of kale, spinach, collard greens and other vegetables every week to nine stores across the city, including Song’s Market in the East End.

Since the program began in 2013, the farm has delivered almost 3,000 pounds of fresh food to Richmond food deserts, said Ms. Sadeghzadeh. Four new stores are expected to be added by June on North Side, South Side and the East End.

Food deserts are defined as pockets of the city where fresh, healthy eating options are scarce.

“We try to be more of a grocery store than a convenience store,” said Xavier Cibes, owner of Song’s Market at 1400 Mechanicsville Turnpike.

Mr. Cibes said the lack of fresh food in the area is partly because of a “misunderstanding” between store owners and customers. Store owners are waiting for an increase in demand for fresh food to sell it, he said, but people in the area won’t ask for vegetables if they don’t see it as a local option.

The cycle of supply and demand for junk food has to break on both ends.

“It’s not easy to break the old patterns. We think it will take awhile,” he said.

Douglas Rowlett, who was shopping at the market, wants more fresh food available to residents of the city’s East End. But he said there’s a “get it and go” and “quick fix” attitude toward food in many of Richmond’s economically depressed neighborhoods.

With tight budgets, some residents are more focused on staying full than staying healthy, he explained.

About 20 percent of Richmond residents don’t have access to nutritional food due to a lack of local options and limited transportation to grocery stores, according to a 2010 study by the nonprofit Feeding America.

“Many Richmonders are going hungry — if not in quantity of available food, then in quality of food with sufficient nutritional value to keep them healthy,” the report stated.

Danny Avula, deputy director of the Richmond City Health District, said that cities like Philadelphia and New York have many local stores with fresh food, which “changes the landscape of what food is available and, over time, that changes the culture of food.”