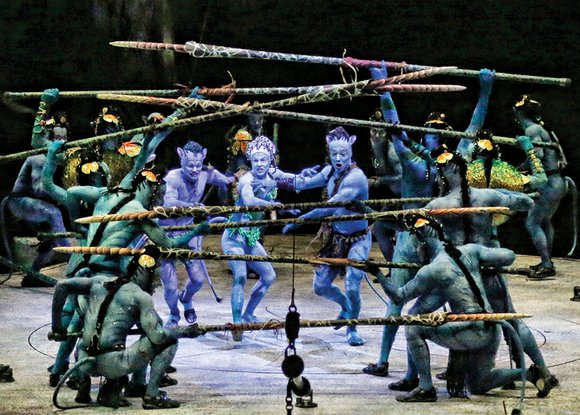 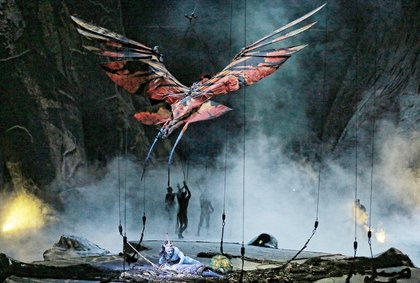 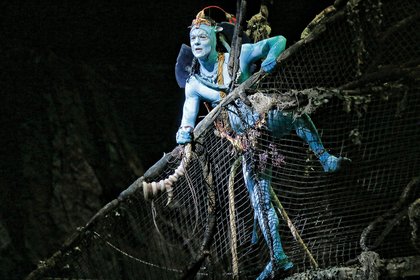 “TORUK” is coming to the Richmond Coliseum Nov. 27 through 29, and will enthrall and engage local audiences with its integration of art and technology. 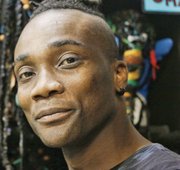 The Richmond Free Press was invited last week to Shreveport, La., for an early look at final rehearsals and preparations, wardrobe designs, sets and the state-of-the-art special effects that make “TORUK” a unique visual experience.

The 35 performers used in this show are double the normal number of artists in Cirque productions.

“It is also the first time that an actor has been miked and speaks,” said Michel Lemieux, who wrote and directed “TORUK” with Victor Pilon. This is the creators’ fourth collaboration with the Canada-based company founded in 1984. The duo also has worked with Cirque du Soleil’s productions “Michael Jackson ONE,” “Midnight Sun” and “DELIRIUM.”

In “TORUK,” the performance area essentially is a fabric that serves as a canvas for multimedia projections that take the audience to the lush jungles of the planet Pandora, where the Tawkami clan lives. Some of the video projections flow beyond the set and into the audience, allowing spectators to feel like they are on the planet, too. Characters speak in the Pandoran language of Na’vi. Additional narration is in English.

Being huge fans of the film, Mr. Lemieux and Mr. Pilon didn’t want to simply retell the story on stage. Nor did they want to do anything to interfere with an “AVATAR” sequel.

So they decided to reach back. And after conferring with Mr. Cameron, they created a storyline based 3,000 years before the events depicted in the movie. “TORUK” finds Pandora in a state of crisis and introduces us to three new heroes.

When a natural disaster threatens to destroy the sacred Tree of Souls, three teens — Ralu, Entu and Tsyal — decide to attempt the unthinkable to save their world. Upon learning that Toruk, a giant flying predator that rules the Pandoran sky, can help save the tree, they journey far and wide to secure the assistance of this feared beast.

“If you’re going to depict a clan, it would be a little difficult to do so without people,” Mr. Pilon joked.

One of the performers is Ivory Coast native Daudet Grazai, 36, who has double duty in the production. He performs a drum solo during one of the tribal scenes and serves as a substitute for one of the main characters. His artistic versatility propelled his two-decade journey to the Cirque du Soleil stage.

In 1995 at age 16, the drummer and acrobat secured a spot at Village Ki-Yi M’Bock, a noted performing arts and cultural exchange center in the West African nation. During a performance workshop, he was spotted by a young woman visiting from Canada.

“She said, ‘You must join Cirque du Soleil,’ ” Mr. Grazai explained. “I knew about Cirque Du Soleil for many years and thought, ‘One day, if there is an opportunity.’ ”

He left Africa at 21 and moved to Belgium and then France, where he worked for 11 years perfecting his craft. When he saw a Facebook post that Cirque du Soleil was calling for artists, he flew to Canada and immediately was accepted into Cirque’s bank of artists. However, no role was offered.

Three years passed before Mr. Grazai answered a call for TORUK. Cirque needed a traditional drummer. It was the inroad he needed. He was offered a part.

“I was very excited,” he said. “I saw the movie two times. It is what I feel about community — about how we can live together and help each other.”

That feeling was shared by Mr. Lemieux.

“‘AVATAR’ touched billions of people,” Mr. Lemieux said. “Its message taps into a collective consciousness that says we are all connected, that we should protect the planet and unite despite our differences. And it expresses this idea in a way that even a child can understand.”

“TORUK” is a continuation of the same theme of the importance of community and how, when we unite as a people, anything — even the impossible — can be accomplished.

Thanks to innovative and interactive technology, audience members will not be asked to put away their cellphones during the show. Cirque du Soleil has create an app that allows the production to take limited control of your cellphone during the performance if you download a free app prior to the show.

Throughout the show, the registered phones will prompt audience members for their participation. For example, during a dramatic scene where the three heroes are surrounded by Viperwolves, the face of selected phones will depict glowing wolf eyes. Those audience members will be prompted to turn the phones outward so that the audience appears to be surrounded by the vicious animals.

Participation also will have its rewards. The app provides behind-the-scenes information, access to a special creators’ page and a special free gift. It also offers citizenship to Pandora.

The show’s creators are hoping that audiences will identify with the theme and its heroes.

“We hope the audience will attach to the story and characters and feel that they, too, can accomplish the impossible in their lives,” Mr. Lemieux said.