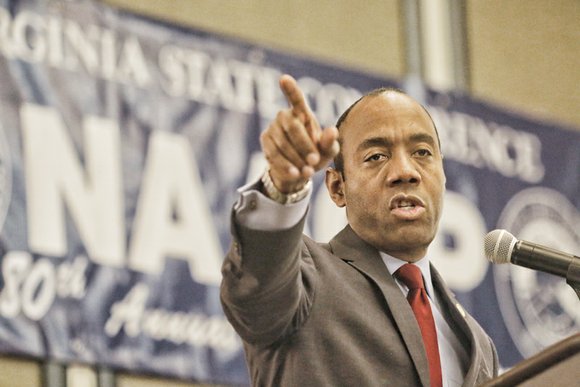 Cornell W. Brooks makes a point as the national NAACP president addresses a luncheon audience last Saturday during the 80th Annual Convention of the Virginia State Conference of the NAACP in Downtown. Photo by Sandra Sellars

A session dedicated to the hot-button topic of police community relations at the 80th Annual Convention of the Virginia State Conference NAACP starkly illustrates the dilemma that confronts Linda Thomas, the newly elected president of the venerable civil rights organization.

On stage at last weekend’s conference in Richmond sat four high-ranking officials of law enforcement agencies in Richmond, Petersburg and Henrico County. In the audience were roughly 100 NAACP veterans from across the state, almost all in their 50s or older. Only a small handful were teenagers and people in their 20s, the age groups most likely to be caught up in a violent confrontation with police.

While the hourlong session was spirited and informative, there was little if any mention of Black Lives Matter, the movement that has electrified a new wave of activism among African-American and other youths across the nation. The sense of disconnection between the graying veterans attending the conference and the passionate protests of young people in the streets was almost palpable. In fact, the only significant mention of the youthful movement during the three-day convention came during a fiery address by TV commentator Roland Martin to the 300 people who attended the convention’s Freedom Fund Banquet on Saturday night.

The organization’s leaders are painfully aware of the generational divide and its troubling implications for the future of the NAACP.

“We don’t have the kind of soldiers, supporters and workers within the NAACP that we had 30 years ago,” said Jack Gravely, interim executive director of the state conference. “We have missed a generation of young folk by not bringing them in, training them and putting them in leadership positions.”

“There’s a void,” adds Mr. Gravely. “You need young legs, young ideas. You need young minds; you need the technology they bring. They would be a tremendous complement to those of us who’ve been out there for a few years. There’s no doubt about it.”

Ms. Thomas said, “We really need to find a way to connect with the 20-somethings and 30-somethings. Their focus needs to be our strategic focus.”

Officials said they wanted to include representatives of Black Lives Matter in the session but where unable to connect with them.

The need for youthful energy and social media savvy is all too evident. The state NAACP’s website is out of date and contains no information about the state convention. The latest posting on the organization’s Facebook page is dated March 23, 2010, more than five years ago.

Such technological snafus are among the reasons why many delegates complain about a lack of effective communication from the organization’s leadership to its rank and file. That problem became much worse, some delegates say, because of internal disarray that erupted after the former state executive director, King Salim Khalfani, was ousted by the board in early 2014 for reasons that have never been publicly explained. The organization went without an executive director until Mr. Gravely, the host of a lively Richmond radio talk show, agreed in April to serve for a year while a permanent replacement is recruited.

Since then, said Mr. Gravely, he has focused on reopening the state NAACP office and rebuilding the membership’s morale.

“We just opened the state office again about six months ago after it was closed for over a year,” said Mr. Gravely. “We’re getting back up and running. We’re not ready for the 100-yard dash, but we are doing better than just walking.”

He says that membership is strong and that the state conference’s finances are sound, but he would not provide any numbers to support his claim. 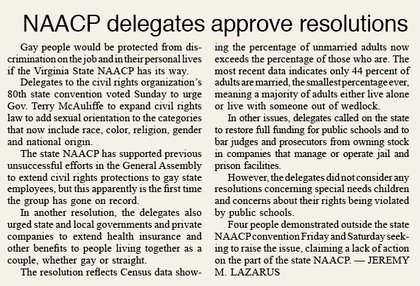 A widespread dissatisfaction with the state conference’s malaise was clearly a major factor in Ms. Thomas’ defeat of previous state NAACP President Carmen Taylor of Hampton, who was seeking re-election.

“Linda has the leadership skills we need to get back on track,” said one NAACP insider. “There have been too many times recently when the NAACP was AWOL — absent without leadership — on important issues. She won’t let that continue.”

Ms. Thomas, too, disputes the widespread perception that the state conference has been adrift since Mr. Khalfani’s departure.

“The oversight of the Executive Committee continued along with the advocacy, lobbying and fundraising efforts of the units and branches,” Ms. Thomas said. “Those workers at the unit level are the heartbeat of the Virginia State Conference NAACP. Despite the closure of the office and the challenges of staffing, the work of both the state office and the units around the state continued.”

In some ways Ms. Thomas’ election — and Mr. Gravely’s selection as interim executive director — are powerful signs of the state conference’s inability to enlist fresh new leadership. The self-described, full-time volunteer activist from Bowling Green already has served two terms as state conference president, from 2003 to 2007, a term as state secretary in 2013, and as director of administration in 2014. As director of administration, she helped to re-open the state office last year before being ousted in April by the Executive Committee, her contract not renewed.

“Re-electing her is a back to the future move,” said a 40-something NAACP member from Northern Virginia. As the Free Press has reported, she was little heard from during her previous posts.

Two other statewide officers, Treasurer Sylvia Wood of Richmond and Secretary LaSalle J. McCoy of Chesterfield, are also holdovers. Only Vice President Joe W. Dillard Jr., 26, of Norfolk is new in his position. At 24, Mr. Dillard was elected president of the Norfolk branch, making him the youngest in the state and among the youngest branch presidents in the nation.

Though Ms. Thomas and other leaders of the state NAACP agree that Mr. Gravely has performed impressively in a difficult role, his future with the organization remains unclear.

“We need to restore operations and management to fully staffed levels and carry out the agenda set by the membership,” says Ms. Thomas. “I certainly think that some reorganization, some reprioritization and some rethinking of how we operate and how we use social media are in order.”

The sooner those tasks are completed the better, NAACP members say, because African-Americans in Virginia still face enormous challenges, from battling racially discriminatory school discipline policies to restoring the civil and voting rights of more than 200,000 African-American felons to eliminating police brutality. It’s a task, said Mr. Gravely, that will require the best efforts from all generations of black Virginians, not only the graying veterans of the NAACP.

“We can’t afford to get comfortable, reading the press releases about our victories in the past,” he said. “We’ve come a long way, but we’ve still got a long way to go.”