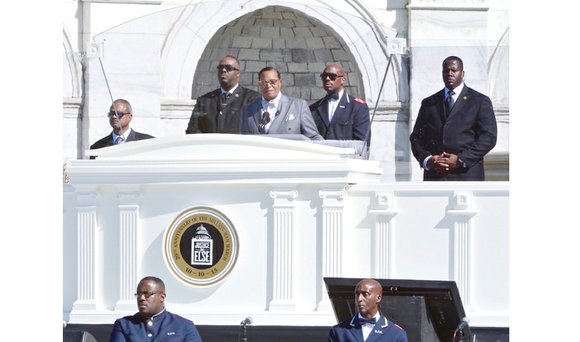 Twenty years ago, 1.2 million African-American men assembled in a blanket of humanity that spread across the National Mall from the U.S. Capitol to the steps of the Lincoln Memorial to attend the first Million Man March.

There, they declared “their right to justice to atone for their failure as men and to accept responsibility as the family’s head.”

Last Saturday, several hundred thousand men, women and children gathered again in Washington under the call of Minister Louis Farrakhan, the leader of the Nation of Islam, for a commemoration of the original Million Man March.

Under the theme “Justice Or Else,” Minister Farrakhan and other speakers crafted a message for a new generation, calling for justice for people of color in the criminal justice system, economic fairness, education equity and full access to voting rights.

During the powerful eight-hour event, they demanded action to change the repressive conditions under which African-Americans, Native Americans, Latinos and other oppressed and marginalized groups exist.

Minister Farrakhan reminded the nation that America was built on the backs of enslaved Africans and African-Americans and that people of color remain oppressed.

He called for people of color to redirect the pain of oppression by withholding their money at Christmas in a massive economic boycott. He said black people spend billions between Thanksgiving and Christmas, with the majority of the money handed to merchants on Black Friday, the day after Thanksgiving.

Raymond H. Boone Jr., Free Press vice president for new business development, displays a poster for the Justice Or Else national rally that drew people of all backgrounds, faiths and ethnicities to Washington.

“Our people have been deprived of the precious essence of life,” Minister Farrakhan said. “Down this Mall, there used to be slave pens. A little yellow house where the man depicted in [the movie] ‘12 Years a Slave’ was held and severely beaten.”

He continued, “I feel the pain of the ancestors, the pain of those on whose shoulders we stand. The young generation has arisen. I see the faces of the young. We who are getting older, myself and my generation, what good are we if we don’t prepare young people to take the torch the next step?” He told the youths, “We see you. We honor you.”

Dr. Charles Shannon, chair of the Virginia and Richmond area organizing committees for the march, described the event as “another glimpse of heaven.”

He estimated at least 400 people from Metro Richmond attended the event. His group alone took four busloads of participants to the event that he described as “peaceful.”

“Everyone was divinely loving, respectful and patient with one another.

“One of the highlights was that many black people, as well as others of all ages, participated — from seniors to little babies,” he said. “I sensed that we all came looking for ways to build a better day now for our people, and God blessed us with what we needed through the participants on the program, especially through the Honorable Minister Louis Farrakhan.”