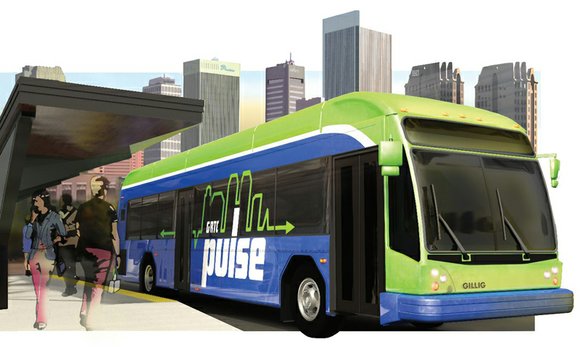 Richmond’s Bus Rapid Transit system is going to cost an additional $11.5 million to develop. But the state — and not Richmond — will pick up the extra expense, GRTC spokeswoman Carrie Rose Pace disclosed Tuesday.

“Under the project agreement, the Commonwealth of Virginia will cover any costs that exceed the estimated project budget,” she stated in an email to the Free Press.

The Virginia Department of Rail and Public Transportation later confirmed that the state is on the hook for any cost overruns. Richmond is contributing about $7.9 million as its share of a system that ultimately will cost about $65 million.

The federal government has provided a $25 million grant and Henrico County is contributing $400,000, with the state picking up the rest of the cost.

The higher cost for the system, to be known as GRTC Pulse, was disclosed Tuesday as the project team announced its choice of the builder for the 7.6-mile line and sent the recommendation to the Commonwealth Transportation Board for approval at its meeting next week.

The winner is a joint venture that includes Lane Construction Co., a veteran transportation contractor based in Cheshire, Conn., and STV, a major engineering firm based in New York.

Lane/STV bid $47.3 million for the design-build project, Ms. Pace said, well above the $35.8 million the Virginia Department had projected in 2015 for construction.

She stated the extra cost is the result of increases in the cost of materials and in the number of BRT projects for the relatively few companies qualified to install the systems.

Based on the Lane/STV bid, VDOT will have to add $11.5 million to pay for items already earmarked in the budget for the purchase of buses, VDOT administration and project management and additional engineering costs. It also includes a contingency fund and $3 million in incentives to encourage Lane/STV to complete the project by August 2017 so the system can be tested and begin operation in October 2017.

Lane/STV beat two other companies that competed for the Richmond project. Ms. Pace said the project team, including representatives of GRTC, VDOT, VDRPT, the City of Richmond and Henrico County, rated the winning bid superior on technical grounds and price.

“Lane/STV’s plan reflects everything presented to the public in 2015 and approved unanimously by the City of Richmond’s Urban Design Committee and Planning Commission in November 2015,” she stated.

“No design feature was sacrificed and the project will be delivered exactly as approved by the project partners and presented to the public,” she stated.