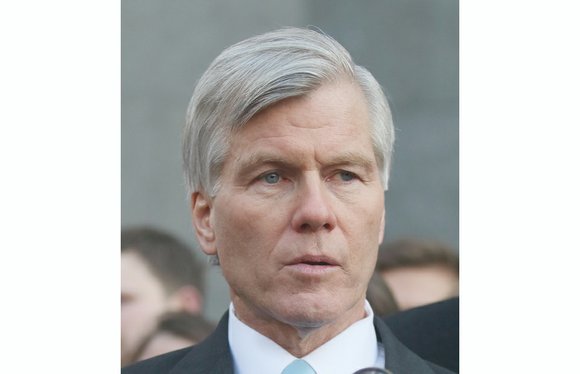 The U.S. Supreme Court heard arguments on Wednesday in former Virginia Gov. Bob McDonnell’s appeal of his conviction on corruption charges involving $177,000 in gifts and sweetheart loans from a businessman seeking to promote a dietary supplement.

The eight justices began hearing a scheduled hour of oral arguments in the case, with a ruling due by the end of June. On a dreary, rainy day in Washington, Mr. McDonnell arrived at the white marble courthouse ahead of the arguments.

U.S. District Judge James R. Spencer sentenced Mr. McDonnell, a 61-year-old former Republican Party rising star, to two years behind bars, but the Supreme Court last year said he would not have to report to prison while his appeals were ongoing.

His lawyers contend the former governor’s conduct did not constitute “official action” in exchange for a thing of value, as required for conviction under federal bribery law.

The actions in question “were limited to routine political courtesies: arranging meetings, asking questions and attending events,” the lawyers wrote in court papers.

His lawyers wrote that a ruling against Mr. McDonnell, who served as governor from 2010 to 2014, would “upend the political process” by transforming ordinary interactions between a politician and political donors into criminal acts.

Mr. McDonnell and his wife, Maureen, were convicted of taking the gifts and loans from Virginia businessman Jonnie Williams.

Prosecutors during the trial described the luxurious lifestyle the McDonnells lived thanks to Mr. Williams, including vacations, designer clothing and shoes, a $6,500 Rolex watch, $15,000 for their daughter’s wedding, golf outings and more.

After a trial that laid bare rifts in his marriage, Mr. McDonnell was convicted of 11 corruption counts including conspiracy, bribery and extortion for taking the gifts and loans in exchange for promoting a dietary supplement called Anatabloc made by Mr. Williams’ company, Star Scientific.

U.S. Solicitor General Donald Verrilli, the federal government’s lawyer before the high court, said in court papers the convictions are valid because Mr. McDonnell took the money “in exchange for agreeing to use the power of his office to help his benefactor.”

The Richmond-based 4th U.S. Circuit Court of Appeals upheld Mr. McDonnell’s conviction in July 2015, and he subsequently appealed to the nation’s highest court.

If the U.S. Supreme Court, shorthanded since the Feb. 13 death of Justice Antonin Scalia, is split 4-4 in Mr. McDonnell’s appeal, that would leave intact the lower court’s ruling, upholding his conviction.