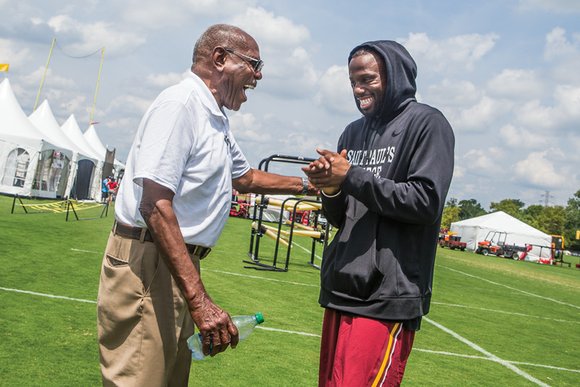 Coach Bailey’s discovery and development of Greg Toler is among the achievements he is most proud.

“Just goes to show that if you have the talent, the world will beat a path to your door,” he said of Toler.

“And it doesn’t matter where you go to school.”

Now in his eighth NFL season, Toler signed a free agent contract in April to play defensive back for the Washington professional team franchise. He’s currently involved in preseason drills at the Bon Secours Training Center on West Leigh Street in Richmond.

Toler’s story reads like a fairy tale in shoulder pads. He was out of school and stocking shelves at a J.C. Penney in Washington, D.C., when Coach Bailey and his St. Paul’s staff came calling.

Coach Bailey was alerted to Toler on a tip from a former player.

“I didn’t know what I wanted to do with my life at the time,” Toler told the Free Press last week following a morning workout.

“Coach Bailey is the one who gave me the opportunity. He believed in me as much as I ever believed in myself. He’s always been like a father figure.”

Toler, who played previously with the Arizona Cardinals and the Indianapolis Colts, has eight career interceptions, three of which he returned for touchdowns.

He is one of a kind.

The lean 6-footer is the only player to be drafted from the now-closed St. Paul’s College in Lawrenceville. He was drafted in 2009 by Arizona in the fourth round and is likely the only player to ever sign a college scholarship between shifts at a department store.

“Not in my wildest imagination did I ever expect this,” said Toler of becoming an NFL veteran. “Every morning when I wake up, I pinch myself to be sure I’m not dreaming.”

Toler was a standout player at Northwestern High School in Hyattsville, Md., but had academic deficiencies and no college offers.

Granted the opportunity, he was a two-time, All-CIAA pick for St. Paul’s and, defying odds, became an NFL prospect at a school with a minimal gridiron pedigree.

St. Paul’s scrapped its athletics in 2011 and, beset by accreditation and financial woes, closed its doors completely in 2013.

Because of that, Toler almost surely will be the only St. Paul’s Tiger to ever wear an NFL uniform.

“It’s just a blessing to be here,” Toler told a group of fans and reporters at the preseason camp.

Toler is one of several athletes from historically black colleges and universities sweating in the Richmond sun at the Washington team camp.

“There’s a tight bond between the HBCU guys,” said Toler. “You can always find a couple of us in every locker room. We talk about things that make the HBCU’s special, you know, like the battle of the bands, stuff like that.”

Coach Bailey posted an overall 238-168 record, with five CIAA titles at Virginia Union University and one at Norfolk State University.

St. Paul’s College had been without football some 20 years when Coach Bailey revived the sport there in 2005. With a bare necessities and depth-shy roster, Coach Bailey somehow won 21 games, twice going 5-5.

Just goes to show you don’t always have to have a big resumé to reach the NFL. A big heart and big talent might get your there, too.