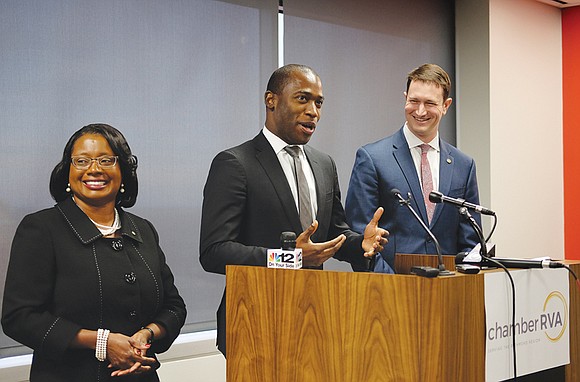 On the campaign trail, Levar Stoney promised to be a “visionary, forward-thinking” leader who would restore confidence in Richmond City Hall.

On Monday, the mayor-elect went to the Chamber of Commerce office on Main Street to announce his choice for the person who would help him transform the city government into a hard-charging operation.

That person turns out to be the same person Mayor Dwight C. Jones has counted on for the past 17 months — Selena Cuffee-Glenn.

The 55-year-old Chesapeake native, who started her career in Richmond years ago in the planning department, will remain the chief administrative officer when Mr. Stoney takes office Jan. 1, reflecting his philosophy of combining “experience with new ideas.”

And the “big, hairy audacious goal” Mr. Stoney said he wants his No. 2 official to achieve: To have Richmond gain the coveted status of a AAA bond-rated city, which Ms. Cuffee-Glenn secured for Suffolk in her previous role there as city manager.

If that goal sounds familiar, it should. It is the same goal that Mayor Jones sought to achieve and almost did during his eight years as mayor, even though ordinary citizens may still wonder how it impacts their lives and improves city services.

During his two terms, Mayor Jones engineered six increases in the city’s credit ratings with Wall Street, ratings improvements that have helped the city secure lower interest rates on debt and moved the city closer to becoming a triple-A city.

Two of the three major rating agencies currently rate Richmond’s debt as AA+, or just below AAA, a status that apparently eluded the city because it would have required putting into savings millions of dollars that never were available.

Along with Ms. Cuffee-Glenn, Mr. Stoney also named a friend and confidant as chief of staff in his office, J.E. Lincoln Saunders, a 32-year-old Lancaster County native whose father is town manager for the county seat of Kilmarnock.

Mr. Saunders currently is chief of staff for Virginia First Lady Dorothy McAuliffe and assisted her on her goal of expanding school programs that provide free breakfast and lunch for students.

He and Mr. Stoney met as campaign workers for Democratic candidates and have remained close for a decade. Mr. Stoney brought Mr. Saunders to the attention of Mrs. McAuliffe.

So far, Mr. Stoney has remained coy about the future of current holders of other executive posts at City Hall, saying only he would have more announcements in the weeks to come.

Ms. Cuffee-Glenn is by far his most important choice. The City Charter vests her with the authority to hire and fire subordinate officials, including the deputy chief administrative officers who report to her, as well as the police chief, fire chief and department directors and deputy directors.

It remains to be seen who will stay and who will go, although one person assured to stay on is the city’s chief financial officer, Lenora Reid, who returned to Richmond to serve with Ms. Cuffee-Glenn following her appointment as Mayor Jones’ CAO.

Mr. Stoney appears ready to give her free rein.

She will remain at City Hall, he explained in a follow-up statement, with the “expectation she will deliver and execute a detailed plan to reform city government to make it accountable to the people of Richmond.”

She also will be charged “with assembling and developing a team of skilled and committed professionals needed throughout the organization” to implement his goals.

In addition to the AAA bond rating, those goals, Mr. Stoney said at Monday’s press conference, include restoring morale among city employees; being responsive in customer service; engaging the community “a lot better than we have in the past” and “building a culture of transparency.”

Finally, “we are going to execute,” he said. “When we say we are going to be there to fill potholes, trim trees or take up stumps, we will do it an in a timely fashion.”

The result he wants is “professional, accountable and compassionate governance that positively impacts the lives of all Richmond residents.”

Notably, Mr. Stoney did not include a mention of public schools or job creation or other areas that are likely to be on the agenda.