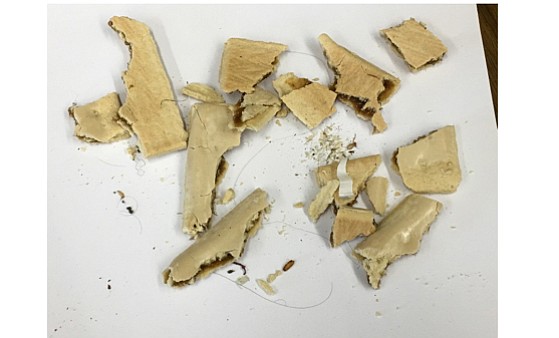 A parent of a Richmond Public Schools student claims that her son’s cafeteria- issued Pop-Tart was contaminated with insects and has demanded an investigation.

As a precautionary measure, all Pop-Tarts have been removed from RPS cafeterias and an investigation is underway, officials said Wednesday.

Crystal Foster, whose son is a 10th-grader at Thomas Jefferson High School where all students are provided with free breakfast and lunch, said her son consumed a cinnamon brown sugar Pop-Tart for breakfast on Friday, Nov. 18, that was filled with unidentified live bugs that blended in with the brown sugar.

According to Ms. Foster, her son’s “picky eating habits” were to blame for the discovery.

“He doesn’t like to eat the edges,” Ms. Foster told the Free Press, referring to the outer crust of the rectangular, pre-baked toaster pastry manufactured by the Kellogg Company.

“He breaks it up and eats the center only. After eating almost all of the middle, he said he noticed things began moving,” she recounted.

By 8 p.m. that evening, Ms. Foster said, she received an automated message from RPS that all Pop-Tarts had been removed from schools.

“The Pop-Tarts were removed as a safety precaution as that is standard procedure whenever there are health concerns brought forward about food items,” Kenita Bowers, a spokesperson for RPS, said Wednesday.

Ms. Foster said she contacted Thomas Kranz, RPS assistant superintendent for support services, who assured her that all cafeteria food is safe for student consumption.

“I guess, to them, pulling the Pop-Tarts was taking it seriously,” she told the Free Press. “But what about all of the other food” from distributors and suppliers “that the children eat? I just don’t trust them. (RPS officials) told me that they sent the boxes to the supplier, but I don’t trust the supplier to tell us what contamination actually may exist.”

So far, no other reports of food contamination have surfaced.

“Our goal is to ensure that those meals are healthy and nutritious in accordance with state and federal regulations. We take these reports very seriously and encourage anyone that has a concern about our cafeterias to contact the school principal immediately to ensure that it is addressed appropriately with the School Nutrition department,” Ms. Bowers said in an emailed statement.

Since 2014, RPS has participated in a federal program that offers free breakfast and lunch to all 24,000 students enrolled in the public school system. Like other schools around the state, each school cafeteria in Richmond is inspected quarterly by the local health department.

According to records, Thomas Jefferson High School was last inspected by Richmond City Health District food inspectors in September 2016 and received one lowest-level violation related to inoperable lighting under an exhaust hood.

Susan Roberson, director of school nutrition services for RPS, has a staff of more than 300 food services and administrative employees, had no comment Wednesday, referring all inquiries to Ms. Bowers.