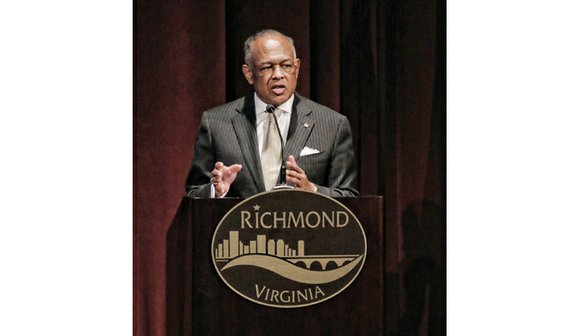 Mayor Dwight C. Jones vows to make “every day count” in his last year as he delivers his final State of the City address on Jan. 28. Location: Sara Belle and Neil November Theatre in Downtown. He will leave office Dec. 31.

Those, said Mayor Dwight C. Jones, are about the only options Richmond has if it is to boost spending on public education by the tens of millions of dollars Richmond Public Schools is requesting.

And he said he would explore with Richmond City Council “the idea of an advisory referendum on the November ballot to determine whether the public wishes to raise its taxes and by how much.”

The focus on public education and its costs was a major highlight of Mayor Jones’ final State of the City speech delivered last week in a Downtown theater to an audience of about 300 people.

Shrugging off the recent church and city-related controversy that has tarnished his administration in his final months in office, the mayor spoke of the bright spots, including the strong growth in population and the boom in development in Downtown and elsewhere.

He also touted the proposed Bus Rapid Transit system as a way to “address mobility concerns” and promoted the planned redevelopment of the Boulevard as a way “to grow our city and generate the revenues to meet our needs.”

But in what could be his frankest remarks, he made it clear that Richmond cannot afford to provide the extra $26 million a year that Schools Superintendent Dana T. Bedden has said is needed from the city to operate a first class system, or the $17 million a year that would be needed to make a big down payment on the $600 million RPS wants to build or renovate schools.

Four days after Mayor Jones’ presentation, the Richmond School Board approved a budget plan that calls for $18 million in additional funds from the city.

The city in this fiscal year is contributing about $145 million as its share of school costs, a boost of about $11 million from fiscal year 2015.

“The bottom line is the money has to come from somewhere,” the mayor said, either slowly from economic growth or more quickly from raising property taxes or cutting city services.

With public sentiment growing for major investments in the school system, Mayor Jones said he and other officials need to have a “serious conversation” with Richmond residents “about the resources we have and the tax levels we can stomach.”

“If it is the will of the people to significantly raises taxes, then they will have the chance to directly indicate that,” the mayor said in touting his referendum idea.

Several members of City Council attending the mayor’s speech embraced the need for serious conversations. However, the referendum idea seemed to fall flat even with allies of the mayor, including Councilwomen Ellen F. Robertson, 6th District, and Cynthia I. Newbille, 7th District.

Councilman Chris Hilbert, 3rd District, dismissed the idea of a vote altogether, saying that decisions on taxes and spending are why people elected City Council representatives.

Mr. Hilbert, who is expected to run for mayor in November, said there is no way he would support a tax increase, even for a good cause like public schools.

As for the referendum, he said, “I’d need to see the specifics and what questions it asks.”

Dr. Bedden said if a referendum develops, “I hope that it has clarity and a realistic process to it.” However, he said he would prefer to try “many other things” first before trying the vote approach. 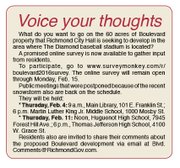