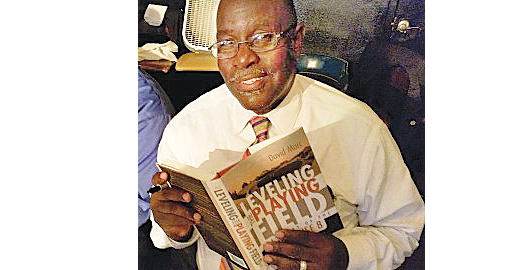 In 1970, Clarence “Bucky” McGill joined fellow African-American football players at Syracuse University in a strike against racist conditions at the school — the first action of its kind.

Now 66, Mr. McGill plans to use the story of the “Syracuse 8” strike to highlight a discussion with young Richmonders and their parents about conditions today that impact them.

The Black Male Emergent Readers’Literacy program, the event is set for 5 p.m. Wednesday, Feb. 17, at the Main Library, 101 E. Franklin St. The event is open to the public without charge.

Fourteen writers are scheduled to participate and sign their books. The event also will include Dr. David Coogan and co-authors reading from “Writing Our Way Out” and Evans D. Hopkins showing a short film.

Mr. McGill, who contributed to David Marc’s book, “Leveling the Playing Field: The Story of the Syracuse 8,” will use the story as the basis for the topic, “Is There a Change in Direction Within The Struggle?”

Mr. McGill said he and the other players went on strike to protest the poor quality of education Syracuse offered him and his fellow teammates, the failure to provide medical care to injured players and the failure to hire any African-American coaches.

A native of New York, Mr. McGill is retired from the Virginia Department of Juvenile Justice, where he created and managed youth art and vocational programs.

This program is a fresh step for Black Male Emergent Readers, a library program that seeks to address reading inequities that affect African-American young males.

Among other things, the library has created BMER kits that contain books, poetry, speeches and DVDs that are aimed at motivating reading and lends them to groups that organize book clubs for youths.