A tale of two campaign offices:

Hillary and Bernie in Richmond 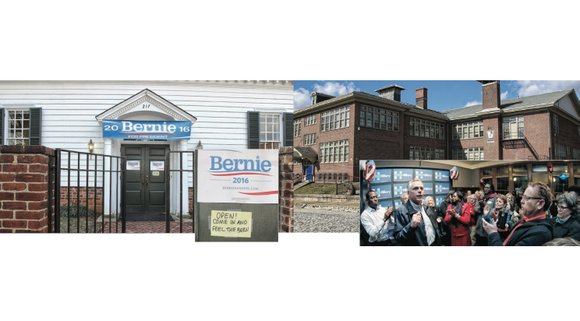 Bernie Sanders and Hillary Clinton each have opened campaign offices in Richmond ahead of the upcoming Virginia presidential primary Tuesday, March 1.

And the sharp contrast between the two spaces appears to speak volumes about the campaigns the two contenders are waging for the Democratic Party’s nomination for president.

While a new poll this week suggests Sen. Sanders is trailing Mrs. Clinton by as much as 12 percentage points among Democratic voters in Virginia, a trip to the two campaign offices raises questions about her ability to maintain such a lead.

Sen. Sanders appears to have an out- reach advantage in the location of his Central Virginia office.

His staff and volunteers are based in a former day care center at 217 W. Grace St. in the heart of Downtown. The space is easily accessible by bus or car, with plenty of street parking. The office also is easy to find as it sits across from the Richmond Police Department’s headquarters.

The city Assessor’s Office lists the building’s owners as Theodore and Mary Bullard. Their relationship, if any, with Sen. Sanders or his campaign could not be determined. The Sanders campaign also did not respond to a query about how and why the location was chosen.

The space seems to exude the Sanders message. Along with three “Bernie” cam- paign signs, a welcoming note is posted on the front door: “Open! Come in and feel the Bern.” On Wednesday morning, three people were inside ready to meet and greet visitors.

There is little welcome to be found at Mrs. Clinton’s office. Indeed, just finding the office can be a challenge, particularly for supporters who are unfamiliar with the city’s Fulton community in Richmond’s East End.

Her area campaign center is in the former Robert Fulton School, which now is an art colony. Called Fulton Hill Studios, the building sits on the hilltop at 1000 Carlisle Ave.

The building belongs to a longtime Clinton supporter, Margaret Freund, president and owner of Fulton Hill Properties. Ms. Freund’s office declined comment on how Mrs. Clinton came to lease it.

The Clinton campaign said the location was chosen because it is “accessible.” The location is served by only two bus routes, unlike the 20 routes that pass Sen. Sanders’ headquarters.

Reaching the Clinton office requires a winding drive through the city. And one has to know to turn on Union Street by the Powhatan Recreation Center to reach the building.

Visitors also are not allowed to enter the building until they use an intercom to notify someone inside for entry or are escorted in.

The campaign office door, which con- tained no signs, was locked at 11:30 a.m. Wednesday and the lights were off, raising questions about how much the office is being used ahead of the primary.

Such differences in the offices may not mean much to most voters. And Mrs. Clinton does have the advantage of being endorsed by many of Virginia’s elected Democratic officials. Many are stumping with her and for her.

And Sen. Sanders’ campaign raised questions when it announced — and then pulled out of — an appearance this week at Virginia State University in Ettrick. No explanation has been offered.

If Sen. Sanders is to overcome Mrs. Clinton’s Virginia advantage, he must recruit a lot of volunteers to help him, and his office location seems ready to make that happen.