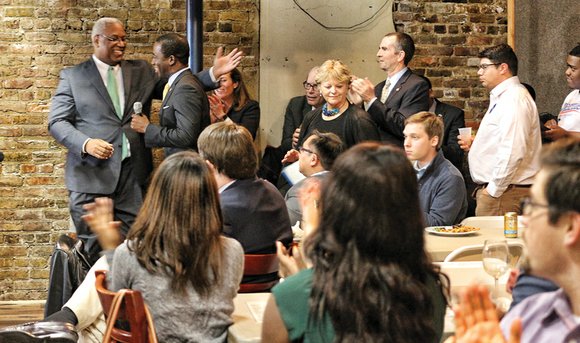 When it was all said and done, Mrs. Clinton easily trounced Sen. Sanders in the state, winning 64.3 percent of the vote to his 35.2 percent.

About 75 people attended the Democratic Party of Virginia’s event at On the Rox at 119 N. 18th St. They shared friendly conversation and warm laughs as they discussed the landslide win by the Democratic presidential front-runner.

Down the street at Southern Kitchen at 1726 E. Main St., about 15 members of the Richmond City Democratic Committee and their guests sat down for a dinner and a post-vote discussion.

All those interviewed by the Free Press at the gatherings voiced their support for Mrs. Clinton’s nomination.

“We’re all real pleased and I know a governor … who is very pleased also,” said Lt. Gov. Northam. He was referring to Gov. Terry McAuliffe, who has close ties to the Clinton family. The governor was at a rally and viewing party in Northern Virginia with other Clinton supporters.

“It’s evident that Hillary is the front-runner in the party now,” Lt. Gov. Northam said. “She is in a very strong position and she’s got a great organization and I think she’s going to be successful at the end of the day.”

“When you look at South Carolina, then at Georgia, Virginia and other Southern states, you see that it comes down to a diverse electorate and you see that she is the candidate of choice.”

Mrs. McAuliffe called it “a great night for the country to see Secretary Clinton win. It’s a great shot in the arm for her campaign. She’s the most experienced in the race. But we still have a lot of work to do,” she cautioned.

“Now is the time for the campaign to unite behind her and get ready for November,” he said.

A few blocks away, Mr. Bourne pointed to Mrs. Clinton’s experience as secretary of state under President Obama, her record as a U.S. senator from New York and her time in the White House as first lady as reasons he’s supporting her.

“Hillary is the one candidate in the race who can govern from day one,” he stated. “Her victories demonstrate she can win across the country in November.”

Leah Walker, an Oregon Hill resident who works for the state Department of Education, echoed those sentiments.

“Hillary Clinton’s victories mean we will have a viable candidate as our party’s nominee,” she said. “Now, I’m looking forward to the general election and supporting her as the nominee.”

She said the hate-filled rhetoric of Donald Trump and other Republican candidates fails to address the needs of everyday Americans.

“To me, the Republican primary candidates have a platform that is divisive to the country,” Ms. Walker said. “It’s important we elect a president whose plans for our country are to take us forward, not backward,” she stressed.

“Some of the rhetoric of the Republicans is terrifying. It’s important that people pay attention and choose a candidate who is fit to lead our country in the 21st century.”

Lawrence Anderson, a consultant who lives in Scott’s Addition, emphasized that Mrs. Clinton and Sen. Sanders best not forget the importance of the African-American vote that helped pave the way to President Obama’s big wins in 2008 and 2012.

“I would say the African-American vote is essential to any Democratic candidates,” Mr. Anderson said. “You saw that in 2008 and 2012. You saw in history what happens when that vote it taken for granted.”

Asked if African-American voters would support Mrs. Clinton in large numbers if she is the eventual nominee, he said, “It depends on who the Republican candidate is.”

“If it’s somebody like Trump, I don’t know of a bigger motivator for black and brown people. In that case, it may be a greater turnout than in 2008 and 2012.”

“Virginia Democrats recognized tonight that Hillary Clinton is the fighter we need to ensure economic prosperity for all, access to affordable and quality health care, criminal justice reform and college affordability,” Delegate Jennifer L. McClellan said in an email to the Free Press about the Super Tuesday results.

“African-Americans played a critical role in her victory tonight, and will do so again in November,” she added.

Asked if she would play a role in Mrs. Clinton’s Virginia campaign going forward, Delegate McClellan said, “I am honored to serve on her Virginia Leadership Council and will do all I can to ensure her election as our next president.”