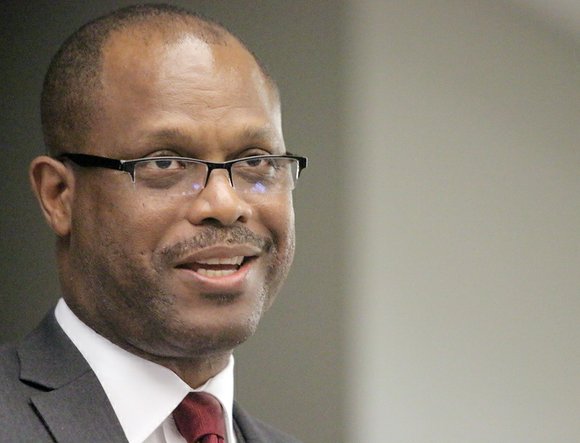 Pay now or pay later in negative repercussions that would largely impact the city’s most vulnerable residents.

That was the urgent plea Richmond schools Superintendent Dana T. Bedden issued Dec. 14 as he unveiled an estimate of needs for the district for fiscal year 2017.

He requested about $26.5 million more than the current budget contains and that would raise the total schools budget to $298 million.

He presented the ambitious request a week after the Richmond School Board voted to add two years to his contract, extending it through June 2019.

The superintendent’s presentation did not address the $169 million first phase of a 15-year, $563 million school building plan focused mostly on South Side that city administration officials already have discounted as too costly.

Mayor Dwight C. Jones’ administration has previously said it would not rely on taxes to come up with the $169 million.

Additionally, the city’s debt capacity for the next five years is about $50 million, administration officials said, and the city is not willing to allocate all of that to satisfy the school district’s wish list.

The education debate intensified last week when the mayor’s spokesperson, Tammy D. Hawley, said in an interview that only about 11 percent of the city’s 214,000 residents are schoolchildren and that many of the city’s other residents likely would want additional taxpayer dollars to go to address the city’s other pressing needs.

Critics seized on those comments to accuse the Jones administration of turning a blind eye to the predominately African-American Richmond school system.

On Thursday, the Jones administration appeared to backtrack from Ms. Hawley’s comments. In a statement his office issued supporting Gov. Terry McAuliffe’s proposed pro-education budget, the mayor said, “I’ve always believed that a strong city is one where all residents care about public education, even if they don’t have kids in the school system.”

Separately, RPS officials announced earlier that it has launched “RVA Future Centers” in all five of its comprehensive high schools this semester.

“Future Centers are dedicated classroom spaces within each school building that are resource hubs for connecting high school students and their families to college and career planning resources,” a district release stated.

The city has touted the implementation of the centers as a step toward reducing poverty through strategies developed by its Office of Community Wealth Building led by Dr. Thad Williamson.

The centers are staffed by a full-time site coordinator, “who develops and implements a school-specific plan to engage all students in developing a personal plan for life after high school, starting in their ninth grade year,” working with RPS guidance staff and community organizations, the release added.

RPS officials said that the initiative is being funded with a $425,000 allocation from the city to the RPS Education Foundation to start the program.