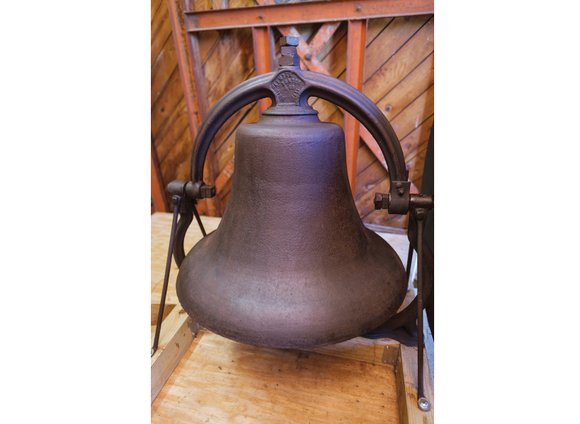 The newly restored bell at historic First Baptist Church of Williamsburg can be rung throughout Black History Month by people who register online at www.letfreedomringchallenge.org. Photo by Darnell Vennie/The Colonial Williamsburg Foundation

Descendants of Thomas Jefferson, the nation’s third president, and Sally Hemings, the African-American woman he enslaved and fathered six children with, are scheduled to gather at historic First Baptist Church of Williamsburg at 10 a.m. Monday, Feb. 1.

They are to be the first to ring the newly restored church bell at an invitation-only event designed to kick off “Let Freedom Ring: A Call to Heal a Nation,” an initiative at the African-American church that is one of the nation’s oldest.

Organizers said the bell-ringing initiative is a “call for racial healing, peace and justice nationwide.” It allows anyone to sign up online at www.let freedomringchallenge.org to ring the bell at the church on any day during Black History Month.

Also part of the celebration will be representatives of the National Network for Arab Americans, a national consortium that “is honored to support a campaign that brings issues of racism and civil rights to the forefront,” according to its website.

The event also will commemorate the 240th anniversary of First Baptist Church, which was formed in secret in 1776 by enslaved and free black men and women. It is believed to be the first black Baptist church organized entirely by African-Americans.

The church, which has about 200 members, was started within what is now the restored area of Colonial Williamsburg. It has been at its present location, 727 Scotland St., since 1956.

The Rev. Reginald F. Davis, pastor at First Baptist, said he welcomes individuals and groups uniting to help achieve the unfinished business of social justice for all in the nation.

“Dr. Martin Luther King Jr., who prayed in our church, said that freedom rings,” Dr. Davis stated. “A silent bell represents unfinished work of freedom and equality. This bell, in this sacred and historic church, will be silent no more.”

The bell and the church belfry were restored with a $52,000 grant from the Ford Foundation, according to Joseph Straw, a spokesperson for the Colonial Williamsburg Foundation.

The bell was acquired by the church in the late 19th century and has been silent since the days of segregation, even in the presence of famed worshipers at the church, including Dr. King and Mrs. Parks.

“The First Baptist Church and its bell encapsulate the complex and at times tragic history of race relations in America,” stated Mitchell B. Reiss, president and CEO of the Colonial Williamsburg Foundation, which operates the historic restored area of Williamsburg that served as capital of the Virginia colony from 1699 to 1780.

At the time, “roughly 50 percent of the city of Williamsburg’s population was African-American and nearly all of those people were enslaved,” Mr. Straw said.

“The bell’s restoration not only demonstrates our recognition of the past,” Mr. Reiss added, “it also symbolizes our determination to continue the march toward justice and the ‘more perfect union’ envisioned by the Founding Fathers on these very streets.”

“With this one simple act, we can get people from across the country to take their turn to ring the bell and join in this movement that honors the past and the tragedies, triumphs and perseverance of African-Americans as a people and what we went through during slavery and the Civil Rights Movement and now today,” Sue Wilson, chair of First Baptist’s communications ministry, told the Free Press.

“And by doing so, we signal that we’re coming together to make the commitment for the completion of a more perfect union,” she added. “This is calling attention to the unfinished business of the nation of providing equal opportunity for all.”

Later on Feb. 1, Mr. Glover is scheduled to host a invitation-only Concert for Hope from 7 to 9 p.m. at the Williamsburg Inn, where performers are to include Ms. Warwick, Ms. Spalding, the Hampton University Choir and Valerie Simpson of Ashford and Simpson fame.

At the concert, Dr. Lafayette will be honored as a leader of the Selma Voting Rights Movement and as a founder of the Center for Nonviolence and Peace Studies at the University of Rhode Island.

The exhibit will feature 12 quilts made by African-Americans between 1875 and the mid-1900s. The Colonial Williamsburg Foundation and The College of William & Mary also will feature a series of special museum exhibits, lectures, films, town halls and other events throughout February.

Mr. Reiss started his job as foundation president in October 2014. He is among those leading efforts to more fairly portray African-American history in the restored area. In addition to stationing African-American interpreters throughout Colonial Williamsburg to share the story with visitors, the foundation also has hired historians Anthony Cohen of The Menare Foundation, which seeks to preserve the history of the Underground Railroad, and Ted Maris-Wolf, a scholar on enslavement, to enhance the foundation’s programs.

Dr. Reginald F. Davis, right, pastor of First Baptist Church, shares a moment with Mitchell B. Reiss, president and CEO of the Colonial Williamsburg Foundation, inside the historic African-American church in Williamsburg.

Mr. Reiss took another important step after a consultant noticed during a 2015 visit to the Williamsburg Inn about a dozen brass doorstops that depicted crude racial stereotypes of African-Americans.

Mr. Reiss directed officials at the inn, which the foundation owns, to turn the doorstops into something “teachable and affirmative” by melting them down and recasting the brass into a plaque bearing the words from an iconic speech by Dr. King.

The plaque will be donated to First Baptist Church, where Dr. King spoke in the summer of 1962, Mr. Straw said.

“These pieces are a symbol of the casual prejudice and outright racism that existed here, even among the generation of leaders that brought us liberty,” Mr. Reiss said. “We are still reconciling those contradictions today.

“Turning those objects of cruelty and subjugation into something truly affirmative is an apt metaphor for our nation’s unfinished progress and our need to keep at it.”