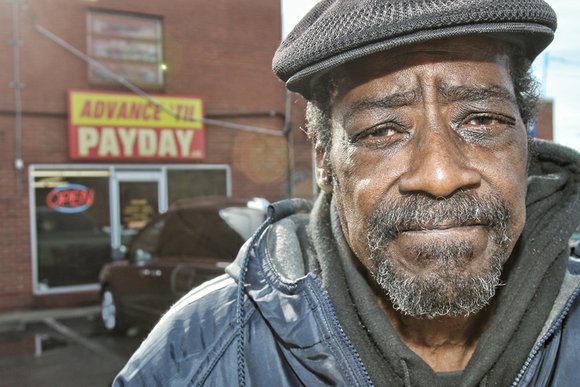 Donald Garrett stands outside the Advance ‘Til Payday loan agency, 4311 Nine Mile Road, where he borrowed $100. The loan ended up costing him $320 in fees he could not afford on his fixed income. Photo by Sandra Sellars

Running short of money to pay bills, Donald Garrett did what many people do — he turned to a payday lender.

He borrowed $100 from a small loan company called Advance ‘Til Payday on Nine Mile Road near his Henrico County apartment in order to catch up.

Four months later, he had wracked up $320 in fees and still was unable to pay off the original $100.

Mr. Garrett, a slender man with a trim goatee, said he didn’t realize what he had gotten himself into when he got the loan in late August. He got out when his friend paid the $100 and the two months of unpaid fees in early January.

“I don’t know what I would have done if I hadn’t got some help” said the 62-year-old who is on dialysis and lives on a $1,300 monthly government disability check.

Welcome to the world of payday and car title loans, where lenders are legally allowed by the state to charge huge fees and interest rates to desperate people with checkered credit.

Mr. Garrett’s story is all too typical of the estimated 140,000 Virginians who annually are entrapped in the interest web of such lenders that the Virginia Poverty Law Center describes as “legalized loan sharks” and even the federal government calls “predatory.”

More than 20 states ban such lenders, including neighboring Maryland, North Carolina and West Virginia. The federal government has capped interest rates on all consumer loans to members of the military at 36 percent.

But Virginia has rolled out the welcome mat, imposing few restrictions and allowing such lenders to charge 224 percent to 305 percent interest to credit-strapped people. One big attraction: No credit checks.

Virginia’s laws also have giant loopholes that allow lenders like Advance ‘Til Payday and TitleMax to avoid the regulations that exist.

“If it’s predatory, it’s because we allow them to be. We set the rules,” according to Delegate Mark Sickles, a Democrat from Alexandria.

Efforts in Virginia to follow the federal model and cap interest rates at far lower levels have been unsuccessful.

However, payday loan companies like Advance ‘Til Payday would likely be unaffected — having found creative ways to avoid typical regulations and state licensing.

To get around potential limits on interest, the Nevada-chartered, Illinois-based Advanced ‘Til Payday doesn’t charge interest, according to the contract a client signs.

Instead, the company provides what it calls an interest-free line of credit and requires a borrower like Mr. Garrett to pay a monthly “participation fee” of $80.

Advance ‘Til Payday also uses a different description of its clients. Instead of borrowers, the company calls clients “members,” as if it were a loan club. To end his membership, Mr. Garrett had to pay the fee and the full amount he borrowed at one time. If he did not pay what he borrowed as well as the fee, he would owe at least another monthly participation fee.

If the $100 loan had been outstanding for a year, he would have paid a total of $960 in participation fees, the equivalent of 960 percent interest on the original loan.

Like other payday lenders, Advance ‘Til Payday only required that Mr. Garrett be over age 18, have a bank account and a job or a verifiable source of income to get the loan.

According to a federal study, the average payday borrower pays $520 in fees and needs a half-year to pay off a payday loan, which typically is made for two weeks to 30 days, depending on when the person is to receive the next paycheck.

In the car-title world, companies like TitleMax get around state regulations by moving their clients into a consumer finance loan when the amount borrowed exceeds $2,500. Currently, state law does not put a cap on the interest and fees a company can charge on consumer loans that exceed $2,500. Last year, such lenders repossessed 20,000 vehicles from Virginia borrowers who could not afford the loans, according to state data.

The average title loan runs $950, it typically takes 10 months to repay the loan, meaning that, on average, borrowers pay $2,140 in interest, the Center for Responsible Lending reported in a recent study.

Despite stories like Mr. Garrett’s over the years, reformers have remained in a distinct minority in the General Assembly, no matter which party is in charge.

Every year, bills calling for a 36 interest cap on all consumer loans have been blocked by a bipartisan majority of legislators who support such loans or who receive large campaign contributions from such lenders. Senate Minority Leader Richard L. “Dick” Saslaw, a Democrat from Fairfax, has received more than $230,000 during the past decade from trade groups representing such lenders, according to the Virginia Public Access Project, which monitors campaign contributions.

Reformers have been unsuccessful during the 2016 General Assembly session, despite Gov. Terry McAuliffe adding his voice to the call for a blanket 36 percent interest cap.

In response, Sen. Saslaw on Monday rallied the Senate Labor and Commerce Committee to kill every bill that would have imposed such a cap, destroying any hope of changing the situation for the Donald Garretts of Virginia.

Only a few members of the committee stood up to support the interest cap, including two members of the Virginia Legislative Black Caucus, Sen. Rosalyn R. Dance, D-Petersburg, and Sen. L. Louise Lucas, D-Portsmouth.

A fresh wave of such reform bills is moving in the House of Delegates. But even if they are approved by the House, such bills are considered likely to die when they hit the Senate committee.

“I shudder every time I get near Advance ‘Til Payday thinking about what happened to me,” Mr. Garrett said. “I see others going inside. I just wish I could warn them. ‘Don’t do it,’ I’d tell them. ‘Find some other way.’ Those people are devils.”