$1.2B needed to maintain infrastructure 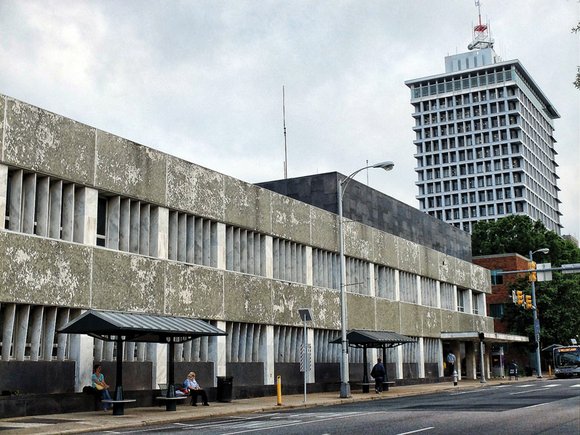 The worn exterior of the City of Richmond’s former Public Safety Building is a prime example of the city’s failure to invest in maintenance. The city now faces a huge bill to cover costs for improving public buildings, streets and other infrastructure, as well as for modernizing schools. Sandra Sellars/Richmond Free Press

Mr. Buturla projects a need to borrow $10 million a year — or $50 million over five years — to maintain the city’s 84 buildings. However, the capital budget shows that a total of just $4.3 million is expected to be available to maintain city buildings ranging from City Hall to the courthouses and fire stations — a $46 million shortfall.

Schools are also a great example of the shortfall. This year, the School Board requested the city provide $41 million in fiscal year 2017 to meet maintenance requirements for its current buildings and then provide a total of $53.5 million during the next four years. That’s a total of $94.5 million for the 2017-2021 period.

Next week, when the task force meets again, Mr. Rose is expected to offer some ideas for boosting the city’s ability to borrow and address more of its needs.

One idea, as he told the council in his report, might be for the city to change its policy to boost its borrowing capacity.

Mr. Rose’s report suggests the policy change could boost the borrowing capacity to $580 million over the 10 years — but it is unclear whether the city would have the revenue to repay the increased debt.

This year, the city expects to spend about $70 million to repay debt. If the council increased borrowing levels to address maintenance, more money would have to go to debt service, leaving even less for its own and the school system’s operations.

“The city has to be realistic if it decides to use more revenue for debt service,” he said. He said there are plenty of examples of governments that ran into financial trouble by over borrowing, with Puerto Rico and Detroit being prominent examples.

Still, unless taxes are increased, or the city finds some other way to dramatically boost revenue, the money to overhaul schools and maintain city infrastructure is unlikely to be available.