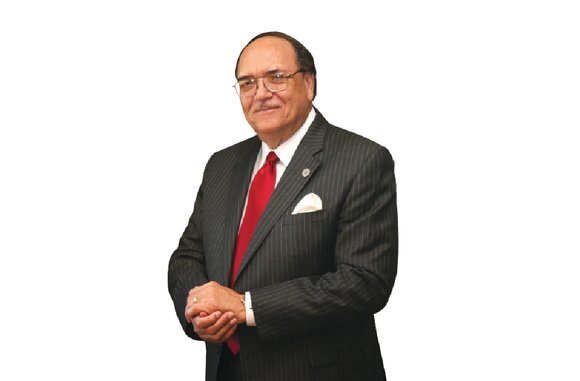 After seven years and five months leading Virginia Union University and having a campus building named in his honor, Dr. Claude G. Perkins is ready to retire.

The announcement of the planned departure of the university’s 12th president came Monday, just two days after Dr. Perkins presided over the 2016 commencement ceremonies and a year after he guided the school through the celebration of its 150th anniversary.

Dr. Perkins will remain president during the sabbatical, although he would be on call to consult with an interim chief operating officer who is expected to be named before his leave starts.

He already told board members he would not seek renewal of his contract, essentially ensuring a new president within 12 months.

Dr. Perkins leaves VUU with glowing praise from the board, which is not shared universally by the students. He is credited with restoring luster to the university that had been struggling when he was named interim president in late January 2009, succeeding Dr. Belinda Anderson.

Among other things, he increased enrollment, boosting the student population to record levels of 1,800 undergraduate and graduate enrollees at a time when other historically black schools continue to be challenged by shrinking enrollment.

“Dr. Perkins’ work at Virginia Union has been truly transformative,” said Dr. W. Franklyn Richardson, chairman the VUU Board of Trustees of the private, Baptist-affiliated school that traces its roots to the end of the Civil War.

“We welcome this period to establish a transition while we have the benefit of his experience and input,” Dr. Richardson said.

Dr. Richardson said the board plans to have the interim COO in place within six weeks and will then begin a search “to match new leadership with the vision for the school.”

Along with raising enrollment, Dr. Perkins has made more than $30 million in campus improvements, including construction of the first new residential facility on the campus in the last 45 years that bears his name.

But there is far more to be done, according to a faction of students who went public with their concerns in a petition on change.org that included a call for Dr. Perkins’ ouster.

First posted a few weeks ago, the petition drew 342 signatures and calls for “a better leader” in citing problems with dorms.

“We are living under terrible conditions — from mold to no hot water for weeks at a time and most importantly (bad) food (in the cafeteria),” the petition states.

The petitioners also alleged a “misappropriation of funds,” although no specifics were offered.

The university has not publicly acknowledged nor responded to the petition, nor has Dr. Perkins. The students who posted the petition did not respond to Free Press requests for additional information.

VUU has changed under Dr. Perkins, from having a fenced campus to offering its first graduate program outside the School of Theology — a master’s program that offers a degree in curriculum and instruction in education.