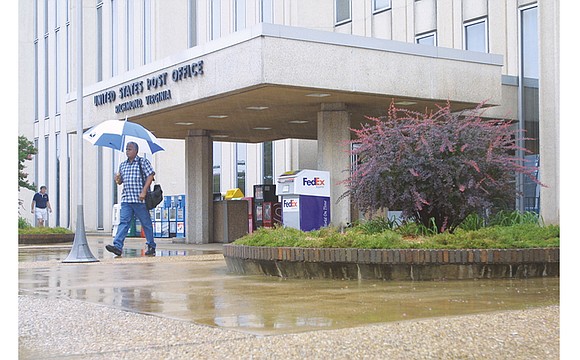 At least three supervisors in Richmond’s Main Post Office appear to routinely change the time cards of letter carriers — without the carriers’ knowledge or permission — in order to reduce their pay.

Documents provided to the Free Press for five carriers show that their digital time cards — called “clock rings” — were altered a collective total of 16 times during a sample period between Aug. 20 and Sept. 2.

The carriers asked that their names not be used for this article for fear of retribution. They also declined to name the supervisors.

Howard G. O’Conner, who has been Richmond’s postmaster since 2005, could not be reached for comment.

The Office of Inspector General, the U.S. Postal Service’s internal investigative arm, was notified nearly a month ago about the problem. A representative of the inspector general’s office also did not respond to a request for comment.

Under their contract, letter carriers are to be paid time-and-a-half if they work longer than eight hours in a day. They also are to receive double time if they work more than 10 hours in one day.

Sources said the time reductions are an effort to prevent the carriers from receiving overtime pay.

In another example, a carrier who had recorded working about 10 hours on Aug. 25 had those hours reduced to around 8 hours by an unidentified supervisor whose entry was used in determining the carrier’s pay.

“Most carriers don’t notice or can’t prove their time has been altered because they don’t keep their own detailed records,” one source told the Free Press.

It is unclear how long the practice has been going on and how many carriers have been affected because the documents provide a snapshot of a short period of time.

Sources told the Free Press this is just one example of the problems within the Main Post Office on Brook Road in North Side.

Recently, the Postal Service reinstated and awarded back pay to three Richmond carriers who had been fired for allegedly throwing away mail rather than delivering it. The three were exonerated and the allegations dismissed as false.

In other cases, some carriers have been denied a mandatory $400 uniform allowance, sources said.