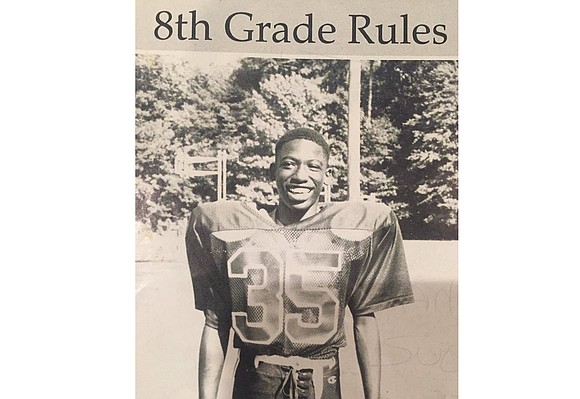 He was as on target then — wearing jersey No. 14 as Tabb quarterback — as he became in the city’s mayoral competition.

Richmond’s mayor-elect was a three-year starting quarterback for Tabb and ranked among the Bay River District’s leading passers, while also serving as a runner.

Melvin Griffin, now coaching at Carrboro High School in North Carolina, was among Mr. Stoney’s coaches in football and also in track and field.

“Levar was a good passer and runner and a leader on and off the field,” recalled Coach Griffin. “He was in charge in the huddle, the locker room, in everything he did.”

Mr. Stoney, 35, boasts a rich athletic history — and there are more chapters to be written even after he sets up shop in the Mayor’s Office in January.

The lean 6-foot, 165-pound Mr. Stoney plans to keep his passing arm warm next spring playing co-ed flag football in the Richmond Sports & Social Club. He has played in the same league for several years.

Plus, he’s a dedicated runner who covered the Monument 10K last April in 45 minutes 53 seconds — a time commendable for someone who is more sprinter than distance runner.

Stoney was about one second shy of setting Tabb’s 400-meter record.

“We never quite got over the hump to make the playoffs,” Mr. Stoney recalled. “I was second or third in the district in passing yardage and ran a lot. But in the district, we were going up against a superstar, Bryan Randall.”

Mr. Randall starred at Williamsburg’s Bruton High School before moving up to play quarterback at Virginia Tech and for three years in the NFL.

While at Tabb, Mr. Stoney collected votes as well as athletic honors. He was elected president of the student body by his classmates and received the Sportsman of the Year Award presented by coaches.

He passed on continuing football and track despite offers from the likes of Virginia Military Institute and Randolph-Macon and Hampden-Sydney colleges.

“I knew then my future was more in politics than sports,” he said.

His ability to win friends and influence people continued at James Madison University, where he became the first African-American male president of the Student Government Association.

Athletic competition has been an integral part of Mr. Stoney’s life. It saddens him to see the state of high school football in Richmond. He attended the Huguenot-George Wythe game during his mayoral campaign.

The city’s five comprehensive high schools were a combined 9-41 this season, suffering many one-sided defeats.

“The after-school activities I was involved in were my salvation,” said Mr. Stoney. “You learn so many values in sports — camaraderie, dedication — in addition to what happens on the field.”

He said he may urge the start of a middle school football program to serve as a more organized feeder system.

“Some of these kids never play a game of football until they line up for their high school team,” he said.

He also hopes to oversee an upgrade in facilities. Except for Huguenot High, which opened last year, the older city schools struggle to match their county rivals in athletic facilities.

“We’re playing second fiddle to the counties,” said Mr. Stoney. “We need to provide a better pathway to success.”

For Mr. Stoney, that pathway led him from a gridiron in York County all the way to the Mayor’s Office in Richmond.