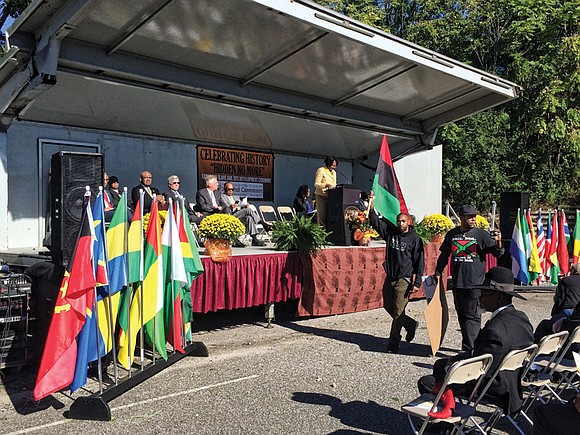 “Our history must never be buried,” Richmond Mayor Dwight C. Jones said as he launched the long-awaited effort to create a slavery memorial at the Lumpkin’s Jail site — a once horrific pen in Shockoe Bottom for enslaved people who were bought and sold like cattle.

“And I am hopeful that this project will be a catalyst for conversation about reconciliation,” Mayor Jones told the roughly 200 people who came to witness the start of the project Monday near 15th and Broad streets.

“Because we are … finding out that we are not living in a post-racial society, there are many issues bubbling below the surface.” 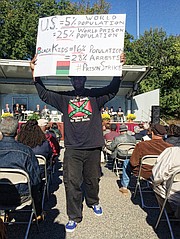 A protester walks through the crowd during the Lumpkin’s Jail ceremony to raise awareness of the mass incarceration of African-Americans in the United States. The event also marked the 216th anniversary of the execution of slave revolt leader Gabriel Prosser on the grounds.

However, the plan for a $19 million project to tell the story of Robert Lumpkin’s jail and Richmond’s significant role in the domestic slave trade is still a work in progress.

About 300,000 enslaved people are estimated to have moved through the city’s auction houses before abolition came.

The heart of the program involved the announcement that the city had agreed to use $1.4 million of the funds to hire Detroit-based architecture firm SmithGroupJJR to undertake the development.

The firm, which was part of the team that created the new National Museum of African American History and Culture in Washington, has been tasked with creating an “interpretive and reflective site” on the now grassy space where the jail once stood, the city stated.

What little remains of the jail — foundations that were discovered in a 2008 excavation — is now buried under 14 feet of earth.

The two-hour “dedication ceremony” included a remembrance of the 216th anniversary of the execution of slave revolt leader Gabriel Prosser on Oct 10, 1800.

And it also helped quell grumbling that the city had done little to use the $19 million in commitments from the city and state to create a memorial on the land known as “the Devil’s half acre.” Ironically, after the Civil War, the site housed a forerunner of Virginia Union University, where newly freed people were educated.

Mayor Jones, a VUU alumnus who will be out of office by the time the memorial is completed, first proposed the Lumpkin’s site memorial as part of a larger commercial development that included his controversial proposal to construct a new baseball stadium nearby. The commercial portion of the plan ended up being dropped in the face opposition from the public and Richmond City Council.

The City Council, though, has set aside $8 million for the Lumpkin’s project. Another $11 million has come from state money that the General Assembly set aside in 2013 at the request of then-Gov. Bob McDonnell. His successor, Gov. Terry McAuliffe, has kept the funding available. Both were special guests at Monday’s ceremony.

SmithGroupJJR has a ways to go before it presents specific plans, said Jeannie Welliver, the city’s project manager. “We hope that moving forward, the community will be engaged in what will come,” she said.

After the ceremony, the city issued a statement announcing that Lonnie G. Bunch III, founding director of the Smithsonian’s national African-American museum, has agreed to serve as scholarly adviser for Richmond’s project.

According to the Smithsonian, the owner of the jail had a “flair for cruelty.” Mr. Lumpkin married one of his slaves, Mary, who inherited the property following his death and then rented it briefly for a school to educate former slaves after the Union victory in the Civil War.

Delegate Delores L. McQuinn, chair of the Richmond Slave Trail Commission, served as the mistress of ceremonies for the program that included musical selections from the Huguenot High School Jazz Band, the Virginia Union University Concert Choir and the Franklin Military Academy Choir.

A small group of sign-holding activists, led by Free Egunfemi, founder of UntoldRVA, added spice by intermittently disrupting the program with protests against the mass incarceration of African-Americans in the United States and what they see as a police state.

During the program, the mayor joined others in planting a tree on the Lumpkin’s site.

Mallory Brownlee of Richmond also performed a captivating monologue in portraying Gabriel Prosser just steps away from where the liberation leader was hanged after his revolt failed.

His words seemed to capture the importance of telling the story of Lumpkin’s Jail: “When a restless soul loses its life, it finds its life in somebody else’s. Until you hear my spirit and see my spirit, that spirit will continue coming back again.”