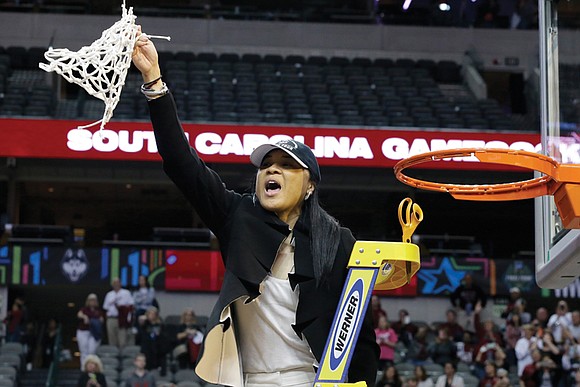 Dawn Staley, who once represented Richmond on the basketball court, ranks with the greatest players in women’s hoops history.

Now she’s making history as a coach, too.

The former University of Virginia star guided the University of South Carolina to its first NCAA Division I women’s title with a 67-55 win over Mississippi State University last Saturday in Dallas.

The first was Carolyn Peck, who coached Purdue University to the title in 1999.

A three-time All-American, Staley led U.Va. to three Final Fours as a player, but the Cavaliers never won the championship. In 1996, she spurred the U.S. Olympic team to the gold medal at the Summer Olympics in Atlanta.

Staley was a WNBA first round draft pick in 1999 and was a six-time All-Star with the Charlotte Sting and the Houston Comets.

During the 1996-97 season, Staley played for the Richmond Rage of the now defunct American Basketball League.

The Richmond Rage, which was 21-19 in 1996-97, split home games between the Richmond Coliseum and the Robins Center at the University of Richmond. In 1997-98, the team moved to Philadelphia.

As a college coach, Staley has compiled a 393-160 record at Temple University and now the University of South Carolina, where she has been head coach since 2008.