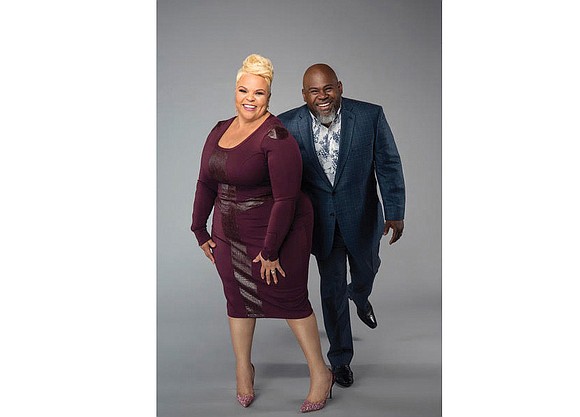 Tamela and David Mann play father and daughter on “Tyler Perry’s Meet the Browns,” but in reality, they are husband and wife. Photo courtesy the Manns

If you are a fan of award-winning gospel singer Tamela Mann, you may know that her 2012 song, “Take Me to the King,” went platinum, selling more than 1 million copies.

You also may know that in addition to recording five albums during the past 12 years, she is also an actress. Since 2005, Ms. Mann has played the role of “Cora Simmons” in numerous Tyler Perry productions on stage, television and in films.

But you may not know that she attributes much of her career success to her family.

In addition to working together on multiple projects, four members of the Mann family are currently on tour.

Ms. Mann, her husband, actor, singer and comedian David Mann, and two of their five children will make a stop in Richmond on Friday, April 21, on their “Mann’s World Family Tour.”

The concert and comedy show will be 7 p.m. at Celebration Church, 5501 Midlothian Turnpike.

Tickets range from $22 to $30 and can be purchased at www.kingdomtickets.com/manns-world-richmond.

“We’re a small company, but this is a big production,” Ms. Mann said in a telephone interview this week with the Free Press.

Richmond is the ninth stop on the Manns’ 25-city tour. From here, they will head south to Fayetteville, N.C., Baton Rouge, La., Pensacola, Fla., and Atlanta. Then it’s on to Detroit and Chicago.

Tyler Perry comedy aficionados know David Mann best as “Mr. Brown,” Cora Simmons’ father, in the TV show, “Tyler Perry’s Meet the Browns.” As in his television performances, he brings a comedy routine to the latest production, his wife said.

Their son, David Mann Jr., contributes as a DJ, and their daughter, Tia Mann, sings gospel and other songs in the production.

The tour also is promoting Ms. Mann’s fifth album, “One Way,” her highest debut ever on the Billboard Gospel radio chart, and the family’s two network television shows.

“It’s a Mann’s World” is a docu-series that premiered on BET in 2015. In its third season, the show moved to the TV One network this season on Tuesday nights.

Their other show, “Mann and Wife,” a Bounce TV sit-com about a newlywed blended family.

“Everything we do is a family affair,” Ms. Mann said. “Even with my most recent album, my daughter sang and my husband and son were co-producers on the album.”

Other producers included Kirk Franklin, Myron Butler and Norfolk native Timbaland, who has produced artists such as Jay-Z, Rihanna and Drake.