Concerns grow amid reports that Trump campaign aides were in frequent contact with Russian officials before Nov. 8 election 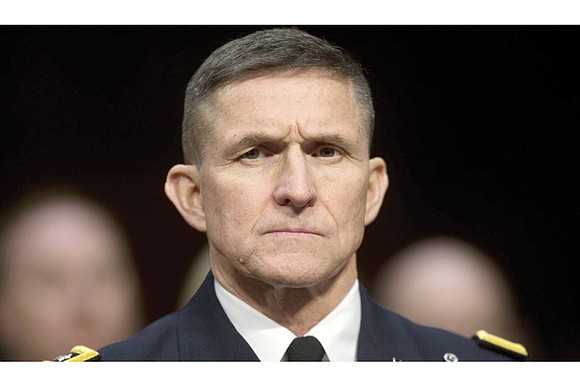 President Trump is facing a deepening crisis over the relationship between his aides and Russia, with senior Republicans vowing on Wednesday to get to the bottom of the matter and Democrats demanding an independent probe.

Amid rising unease among fellow Republicans in Congress less than a month into his presidency, President Trump sought to focus the attention on what he called criminal intelligence leaks about Michael Flynn, his ousted national security adviser.

The New York Times reported on Tuesday that phone call records and intercepted calls showed members of President Trump’s presidential campaign and other Trump associates had repeated contacts with senior Russian intelligence officials in the year before the Nov. 8 presidential election.

The report came nearly 24 hours after Mr. Flynn was forced to resign over conversations he had last December with the Russian ambassador to Washington and misleading statements about them to Vice President Mike Pence.

The New York Times, citing current and former U.S. officials, said U.S. law enforcement and intelligence agencies intercepted the communications around the same time they discovered Russia was trying to disrupt the presidential election by hacking into the Democratic National Committee.

The Kremlin has dismissed the reports as groundless.

According to the report, the officials conceded they had “so far” seen no evidence that Trump campaign officials had cooperated with Russian intelligence in Moscow’s efforts to influence the election in the president’s favor. The officials did not explain what the contacts were about.

However, report of the frequent contact last year between Trump campaign aides and associates drew fresh consternation from lawmakers who raised questions about who authorized the contact by campaign aides and later Mr. Flynn with the Russians and what was done with the information.

The president’s Republican critics, including U.S. Sens. John McCain and Lindsey Graham, also raised questions, with Sen. McCain describing the situation as a “troubling indication of the dysfunction of the current national security apparatus” in a complex global environment.

“Gen. Flynn’s resignation also raises further questions about the Trump administration’s intentions toward (President Vladimir) Putin’s Russia, including statements by the president suggesting moral equivalence between the United States and Russia despite its invasion of Ukraine, annexation of Crimea, threats to our NATO allies and attempted interference in American elections.”

But comments by Senate Foreign Relations Committee Chairman Bob Corker, a Tennessee Republican who has been a Trump supporter, increased the pressure on the White House.

Sen. Corker said the Russia issue is threatening President Trump’s agenda on foreign affairs and domestic matters like healthcare and tax policy. He questioned whether the White House would be able to stabilize itself and said Mr. Flynn should testify before Congress.

Democrats doubted that the Justice Department, now led by Attorney General Jeff Sessions, a pick of President Trump, or the Republican-led Congress will pursue the matter vigorously.

On Wednesday, a growing number of Democrats demanded an independent investigation of possible illegal communications between Mr. Flynn and the Russian government and any efforts by Mr. Flynn or other White House officials to conceal wrongdoing.

The Democrats called for either a special counsel appointed by Mr. Sessions, or the creation of a bipartisan commission with subpoena power. Senate Democratic Leader Chuck Schumer of New York said Mr. Sessions, a close ally of President Trump, must recuse himself from any investigation.

Sen. Graham called for a broader bipartisan congressional investigation to be conducted by a newly formed special committee rather than existing committees, if it turns out that the Trump presidential campaign communicated with the Russians.

“It’s time for us to look into all things related to Russia’s involvement in 2016,” Sen. Graham told reporters, referring to last year’s election.

But the top Republicans in the Senate and House of Representatives have insisted the matter be investigated by existing Republican-led committees.

U.S. intelligence agencies previously concluded that Russia hacked and leaked Democratic emails during the election campaign as part of efforts to tilt the vote in Mr. Trump’s favor.

Some experts expressed concern the White House could curtail or divert probes into Mr. Flynn and Russian involvement in the election unless Congress becomes more aggressive by holding hearings and appointing an independent commission or special prosecutor into whether President Trump’s team violated federal laws in their contacts with Russia.

Intelligence agencies now overseen by President Trump may not be ideally suited to the job, they added.

“It’s not, at the end of the day, the job of the intelligence community to regulate the White House — and it shouldn’t be,” said Stephen Vladeck, a University of Texas law professor who focuses on constitutional law and national security.

Mr. Flynn was abruptly forced out by President Trump on Monday after disclosures he had discussed U.S. sanctions on Russia with the Russian ambassador before Mr. Trump took office, and that he had later misled Vice President Pence about the conversations.

The drama of Mr. Flynn’s departure was the latest in a series of White House missteps and controversies since President Trump was sworn in on Jan. 20.

In Twitter posts on Wednesday, President Trump called the reported Russian connection with his campaign team nonsense, adding: “The real scandal here is that classified information is illegally given out by ‘intelligence’ like candy. Very un-American!”

At a news conference later with Israeli Prime Minister Benjamin Netanyahu, President Trump charged that intelligence leaks to the news media were “a criminal act.” He said Mr. Flynn, a retired U.S. Army lieutenant general, was “a wonderful man” who has been treated “very, very unfairly by the media.”

But White House spokesman Sean Spicer said on Tuesday that President Trump asked for Mr. Flynn’s resignation because of the president’s “eroding level of trust” in Mr. Flynn after a series of “questionable instances.”

Mr. Spicer on Tuesday also denied there had been any contact between any member of the Trump campaign team and Russia.

From early on in his White House bid, President Trump said he would like improved relations with Russian President Putin, a stance criticized by Democrats and also by some Republicans concerned about Washington softening its stance after Russia’s annexation of Crimea from Ukraine and aggression in Syria.

House Democratic leader Nancy Pelosi called on the FBI to expedite an investigation into the financial, personal and political ties of President Trump and members of his administration to the Russians.

“There are suspicions that have arisen about the president of the United States,” Rep. Pelosi said, including behavior she called “very dangerous to the national security of our country,” including poor judgment in appointing Mr. Flynn.

The Trump administration has offered Mr. Flynn’s former job to U.S. Navy Vice Admiral Robert Harward, said two officials familiar with the matter. It was not immediately clear if Vice Adm. Harward, a former deputy commander of U.S. Central Command, had accepted the offer, according to sources.