John Marshall ready for regional playoffs with tall men in front, back court 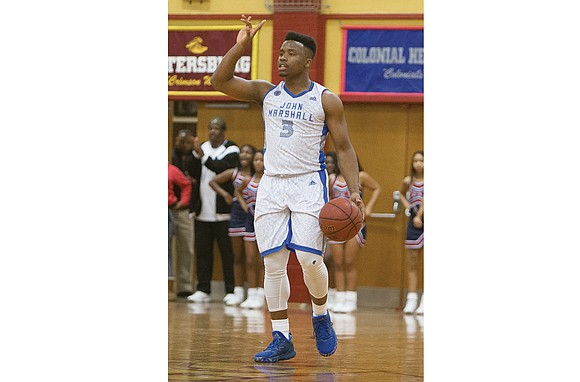 The back court of sophomores Levar Allen and De’Marr McRae hasn’t taken a backseat for the Conference 26 champions.

John Marshall defeated Richmond’s George Wythe High School 56-53 for the conference crown Friday, Feb. 17, in Petersburg and will carry a 17-6 record into this week’s 3A East Regional playoff.

“We’re known mostly for our size but, no question, Levar and De’Marr form one of the best sets of guards around. I love the way they compete,” said Justices Coach Ty White.

Heading into this week’s 3A East Regional, the 6-foot Allen was averaging 10 points, three rebounds and five assists.

“My job is to get everyone involved,” said Allen, who broke into Coach White’s lineup last year as a freshman.

Allen and McRae are most dangerous penetrating into the paint, creating scoring opportunities for themselves and their towering teammates.

“If we make (the front court) look good, they make us look good,” said McRae.

Both have hoops in their family trees.

Allen’s older sister, Naterria Luster, led John Marshall to the state semifinals in 2015 and is now on scholarship at Pensacola State College in Florida.

Coach White is quick to rave about his 10th-grade tandem.

“Levar can score if he needs to, but he’s mostly a penetrator. De’Marr may be the state’s most athletic guard. He’s also a tough-nosed kid. On any other team, they’d be scoring a lot more.”

A sign of a smart athlete is one who continues to expand his talents. Jones arrived at John Marshall as a pure post player but has worked diligently on his ball handling and outside shot.

“The idea was to be ready to play the wing on the next level,” Jones said. “Plus, I like playing away from the basket. You can see more of what’s going on.”

Anderson averages 13.4 points and 9.6 rebounds. He also is a college football quarterback prospect in the Cam Newton mold. A senior, Anderson hopes to play both basketball and football in college, with Hampton University among his suitors.

After transferring from Baltimore, Todd is arguably the nation’s top freshman prospect. The quick, 190-pounder averages 13 points, seven rebounds and two blocked shots. His growing list of recruiters includes the University of Virginia, University of Kansas and University of Maryland. In a nonofficial visit, Todd attended the Maryland-Indiana University game on Jan. 10 in College Park.