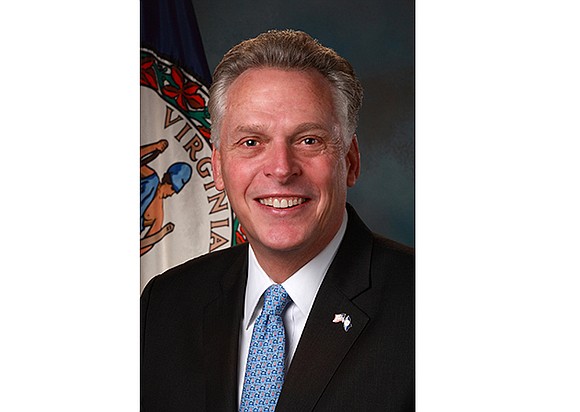 Gov. Terry McAuliffe is proposing changes in state laws that could help reduce the number of people who end up becoming unemployed or who are sent to prison.

He went to CARITAS Works, a nonprofit workforce development program in South Side on Tuesday to unveil his criminal justice reforms — all of which are expected to face tough sledding in the Republican-dominated General Assembly that will convene next week.

One proposal would end the state practice of suspending driver’s licenses for people who cannot pay outstanding court fees and fines.

A second would raise the threshold for charging a person with a felony for larceny from $200 to $500.

The governor also announced legislation that would make it easier for anyone convicted of a felony to petition for a writ of actual innocence based on new DNA evidence.

“Throughout my administration, I have worked with Virginia’s public safety officials, the legislature and the courts to assure that we have a criminal justice system that is fair and seeks true justice,” Gov. McAuliffe said.

“The changes we are proposing today seek to hold offenders responsible for their crimes in a way that maintains opportunities for rehabilitation and future productivity,” he said.

The drivers’ license proposal would have the biggest impact and comes amid a federal lawsuit the Legal Aid Justice Center has filed challenging the constitutionality of the state’s process for stripping people of their driving privileges.

About 850,000 people — or nearly one in every six adults in the state — are barred from driving because of a suspended license, the governor noted.

He said he would submit two bills to reduce the practice of taking drivers’ licenses that are essential for people to get to work, forcing many to court arrest and conviction for driving while their license is suspended.

“Taking their license prevents them from being employed and ultimately from paying overdue court costs and fines,” he said.

Taking aim at Virginia’s $200 larceny threshold set in 1980, the governor called it “outdated” and noted that the threshold is “currently the lowest in the country.” He said keeping the threshold artificially low “creates employment, housing and other difficulties that come with a felony conviction.”

Although raising the threshold for a felony has been rejected in past legislative sessions, the governor said that raising the threshold to $500 would bring Virginia in line with other states that make thefts of lower amounts a misdemeanor that can keep a convicted person in jail for up to a year.

The governor said that his third proposal would eliminate arbitrary barriers that bar certain defendants from petitioning a court seeking their innocence based on new or untested DNA evidence.

He said the legislation would reduce the chances of keeping wrongly convicted people in prison when evidence that exonerates them turns up after trial.