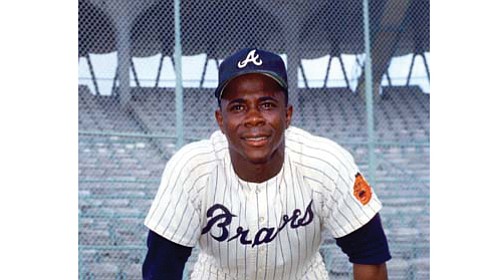 No athlete ever shined brighter, or created more excitement on the Boulevard than the left-handed hitting outfielder renowned for his elite bat, blinding speed and fitting nickname.

A third round draft choice out of Grambling State University in Louisiana, the two-time International League All-Star was brilliant in two seasons with the Richmond Braves, Atlanta’s former top affiliate.

Garr, along with Tommie Aaron and Dusty Baker, were among the first African-Americans to suit up at the old Parker Field.

The African-American players of that era lived at the Eggleston Hotel in Jackson Ward. At least once in 1970, Garr and Baker visited the former Richmond Afro-American newspaper and its editor, the late Raymond H. Boone.

Upon arrival in Atlanta as a full-time player in 1971, Garr maintained his torrid offensive pace.

The next season, he hit .325, second in the NL again, this time to the Chicago Cubs’ Billy Williams.

“The Road Runner” was just getting loose.

At Atlanta’s Fulton County Stadium, Garr was a fan favorite both for his productivity and for his nickname, which was made official in Georgia. The Atlanta Braves negotiated an exclusive baseball contract with Warner Bros. Cartoons to use animated scenes from the Looney Tunes character “Road Runner” on its scoreboard. Whenever Garr reached base, the cartoon character’s “Beep! Beep!” was played on the right field calliope.

Hall of Fame columnist Jim Murray of the Los Angeles Times once wrote this about Garr: “He’s harder to get out than an impacted tooth.”

Few have been more proficient at collecting hits and accumulating Hall of Fame honors.

Garr is a member of the state of Louisiana, Grambling State, International League and Atlanta Braves halls of fame.

The speedster delivered on all levels.

Tom Tresh, Joe Pepitone and Al Downing were among the Virginians who moved up to help the parent New York Yankees to several American League pennants.

More recently, former Richmond Squirrels shortstop Brandon Crawford was a mainstay for the San Francisco Giants during their 2010, 2012 and 2014 World Series wins.

Pro baseball on the Boulevard has provided almost continuous entertainment for well more than a half century.

But those who had the privilege to watch him hit with a vengeance and kick up a cloud of dust on the base paths are convinced that Garr, “The Road Runner,” remains the top all-time attraction.