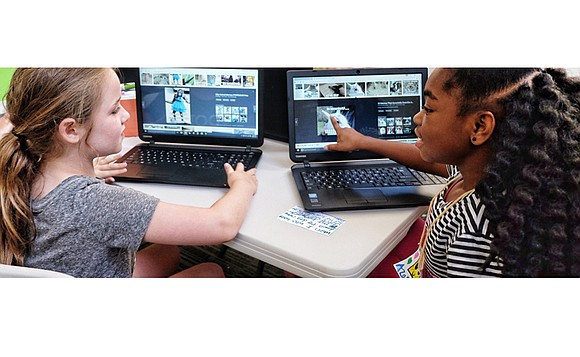 A diverse group of 281 youngsters ages 6 to 14 will spend part of their summer vacation learning the basics of computer science in a Downtown storefront.

Divided into groups of six to 10, they’ll each spend three hours a day for a week or two in the unique summer camps of CodeVA, a Richmond-based group led by husband-wife team Chris and Rebecca Dovi that seeks to spread computer knowledge to students and teachers.

The summer camps are held at CodeVA’s headquarters at 300 E. Broad St., a renovated building that also includes a basement theater and second-floor apartments.

“We use an arts-integrated curriculum to introduce kids to the concepts and vocabulary of computer science,” said Margaret M. “Maggie” Smith, a veteran community arts educator who has run the camps since 2014 as CodeVA’s director of children’s programming.

She oversees 12 instructors who handle the classes using age-appropriate computer language for participants who range from rising first-graders to rising eighth-graders.

“We encourage our students to think it is fun,” Ms. Smith said, and to “make them feel comfortable” using a computer language.

Instead of talking about STEM, the acronym for science, technology, engineering and math, that she said has become a turnoff for kids, she talks programming.

“Kids ears perk up when they hear that,” she said.

Even though the classes are described as play, the students without realizing it are absorbing “important concepts of serious software development,” she said.

This is the fourth summer that CodeVA has offered the one- and two-week summer camps for a mix of Richmond area students, some of whose parents cover the $150-a-week tuition and others whose tuition is paid through grants.

For example, grants from Capital One and the Richmond Ambulance Authority will enable CodeVA to enroll 78 students who live in Richmond’s public housing communities and 60 more from other places.

The summer camps began Monday and will continue into August, with up to five classes a day.

Ms. Smith said she hopes the lessons learned will stick with the students as computer science becomes a more common subject in area schools.

As the result of lobbying by Mr. Dovi and others, the General Assembly passed and Gov. Terry McAuliffe signed a bill in 2016 that made Virginia the first state to add computer science to its core subjects, putting it on a par with English, math, history, science and social studies.

To help build momentum, CodeVA has been on the front lines providing training for Central Virginia teachers on the ins and outs of computer science instruction. The organization has trained more than 1,500 teachers in weeklong, intensive courses. The teachers then become trainers for others who want to incorporate computer science in their classrooms.

By getting students started and enabling teachers to get involved in the education process, CodeVA believes that a subject it sees as crucial to education is gaining ground slowly but surely.