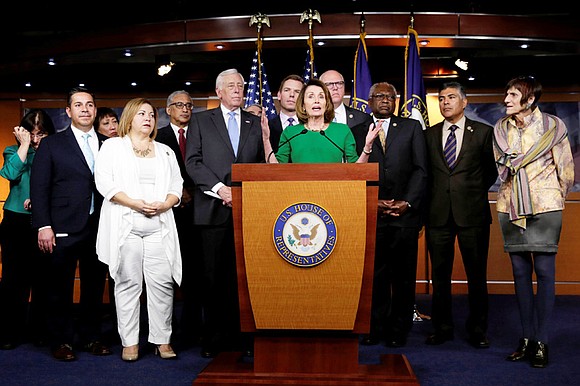 House Minority Leader Nancy Pelosi of California, center, proclaims victory with fellow Democratic members of the House of Representatives after a bill to repeal and replace Obamacare was pulled from consideration because the GOP lacked the votes for passage. Yuri Gripas/Reuters

That was the jubilant cry last week as President Trump’s attempt to roll back health insurance for millions of Americans suffered a stunning defeat.

Leaders in a Congress controlled by the president’s own Republican Party pulled his legislative proposal last Friday after it was clear they didn’t have the 216 votes needed to pass the measure in the House of Representatives.

The health insurance failure called into question President Trump’s ability to get other key parts of his agenda through Congress, including tax cuts and a boost in infrastructure spending, and the Republican Party’s capacity to govern effectively.

Trumpcare, as the bill was informally dubbed, would have eliminated insurance coverage for 14 million people next year and 24 million people within 10 years, according to the nonpartisan Congressional Budget Office.

Trumpcare also would have left the nation’s $3 trillion-a-year health care industry in disarray, other analysts said.

The legislation would have completely revamped Obamacare or the Affordable Care Act that was a signature legislative achievement of President Trump’s predecessor, President Obama.

That law, which remains undisturbed for now, provides health insurance coverage primarily for people who cannot get such coverage through their workplace or through another government program.

President Trump and his GOP allies generated a backlash from the public as well as doctors, hospital groups and even some insurers.

As he had on during his campaign, President Trump came into office pledging to have Congress quickly “repeal and replace” the Affordable Care Act with something better, though the plan mostly provided major tax cuts for wealthier Americans.

A rebellion by Republican moderates and the party’s most conservative lawmakers left the GOP short of votes in the House, ensuring failure for President Trump’s first major legislative initiative. Democrats were unified against it.