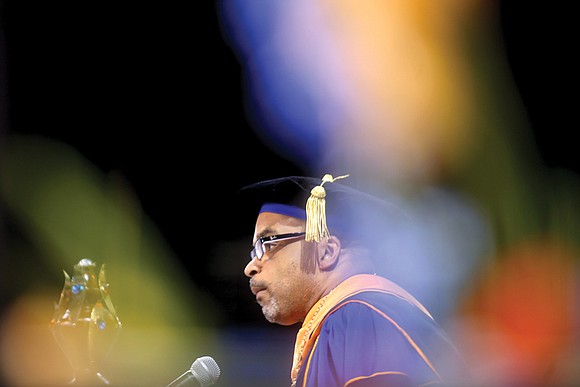 “I first met him … as a dashiki-wearing dude from Chicago,” said Dr. Henry Lewis, former president of Florida Memorial University and a former boss of Dr. Abdullah, who served as provost and vice president for academic affairs at the Miami Gardens, Fla., institution during Dr. Lewis’ tenure.

Below, the Virginia State University Concert Choir and the university’s Gospel Chorale perform during the president’s investiture, including the black national anthem, “Lift Every Voice and Sing,” and the VSU alma mater.

Dr. Abdullah is a Howard University alumnus and the youngest African-American to receive a Ph.D. in engineering from Northwestern University at age 24.

Before taking over the helm at VSU in February 2016, Dr. Abdullah also served as provost and senior vice president at Bethune-Cookman University and dean of the College of Engineering Sciences, Technology and Agriculture at Florida A&M University.

Last week’s ceremony, held in the university’s Multi-Purpose Center before a crowd of several hundred students, professors, visiting dignitaries, family members, friends and well-wishers, was the official inauguration of Dr. Abdullah, who took the oath of office and received the symbols of authority — presidential regalia, a medallion and mace — from VSU Rector Harry Black.

Speakers — from Virginia Secretary of Education Dietra Trent to his wife, Ahkinyala Cobb-Abdullah — spoke about his drive, dedication and relatability.

“I can call him, tweet him, text him, and he’ll respond,” said Franklin Johnson Jr., president of the VSU National Alumni Association.

“He and I laugh about everything — it’s our workout plan,” said Tracy Carter, a family member. “He has loyalty, integrity and love, and he can dance, too.”

During the weekend, VSU students and alumni circulated on social media a cellphone video of Dr. Abdullah hitting all the right moves in a dance routine with two others at a VSU student celebration on Friday night.

“It’s official y’all. My president is so dope!” said the accompanying tweet.

“While it is no secret that VSU has seen its fair share of hard times, they have emerged stronger than ever with President Abdullah at the helm,” Secretary Trent said in a statement.

“His inauguration represents a new day for the VSU family and I look forward to continuing to work with the new president and his administration to address the issues facing our HBCUs and all of the Commonwealth’s colleges and universities.”

Dr. Lewis advised the VSU community to stand together to support the new president to continue the university’s progress.

“A university’s board of visitors, faculty and staff, alumni and friends are the four-legged stool that must support the president so the student can sit there properly.”

During his remarks, Dr. Abdullah outlined his vision for VSU, which he calls Virginia’s “opportunity university.”

“I am thankful to those who fought and died, and fought and lived, so we could have a better day here at Virginia State University,” he said.

He talked about the four core principles upon which his presidency is based: Belief in God, family, the transformative nature of education and VSU.

In a telephone interview, he said fiscal efficiency and focusing on stories of accomplishment are key in moving the university forward.

“We need to become more efficient, and maximize how we use tuition and state funding so we can invest more in our students,” he said. “The admissions staff is doing a great job getting out and speaking to young people about the quality of education we offer and the fun we have while doing it.”

The efforts of this renewed focus are beginning to bear fruit. Last April, ESSENCE magazine named VSU one of the nation’s top 20 “Best Colleges for African-Americans.” In the fall, the university had a 30 percent increase in freshman enrollment over the previous year.

Creating great students begins long before they arrive at VSU, Dr. Abdullah told the audience. He charged parents with requiring students to do their best in math, for example.

“Don’t give them permission to not like math — they have to do it,” he said, adding that the university must nurture student math readiness to produce more STEM professionals as well as greater investment in the humanities and social sciences.

Dr. Abdullah said he is excited about VSU’s future and sees the “opportunity university” as its own unique institution.

“We don’t need to be looking at what everyone else is doing because we don’t have competitors,” he said. “We have collaborators and partners that will help us continue to build upon our success.”