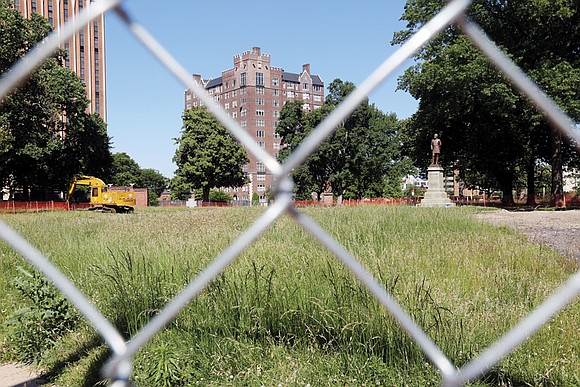 Behind construction fencing, part of Monroe Park appears untouched. But heavy equipment is digging up ground elsewhere on the 7.3-acre site. The city’s oldest park has been closed to the public since November to make way for $6.6 million in improvements. Work began in April and could take 18 months to complete.

The renovation of Monroe Park is a prime example of why Richmond City Council is becoming more aggressive in overseeing city spending.

After telling City Council in December that the projected $6 million Monroe Park project — half to be paid by private donations — had adequate funding, the city’s chief administrative officer, Selena Cuffee-Glenn, quietly shifted $833,569 to the project in recent months from reportedly unused capital funds.

The shift was made without notice to City Council and was disclosed as the result of queries from Councilman Parker C. Agelasto, 5th District, and the council’s budget staff.

Mr. Agelasto also was surprised to learn that nearly half of the money shifted, $394,000, was listed as coming from two paving projects in his district that already had been completed and paid for — one involving Allen Avenue and the other involving paving at Meadow Street, Colorado Avenue and Harrison Street.

In a May 17 memo to the administration, Mr. Agelasto wrote that the city administration appears to have used those projects as a faulty excuse to reduce the funding for street paving in the Capital Improvement Budget.

He noted the spending for the two projects in his district had been recorded in the wrong account and that the council was told that money for them was to be re-recorded in the appropriate account in the capital budget — street paving.

Instead, the money was designated as available and shifted to Monroe Park, a shift he stated that would “not be in keeping with the spirit” of the City Charter section allowing such transfers and that would reduce already inadequate funding for repaving streets.

“The City Auditor and the Department of Public Works has confirmed the city is significantly delinquent in its repaving program,” Mr. Agelasto stated. “Increasing the capital budget for Monroe Park (above its original budget) is a nicety and not a necessity. It should not come at the cost to our streets and the paving account.”

Ms. Cuffee-Glenn has not responded to Free Press requests for an explanation about the funding transfer.

However, according to information on the city’s website, the city’s share of the Monroe Park project’s cost has ballooned by 30 percent.

While the December report to City Council showed $2.77 million had been appropriated for the park project, a separate procurement department report shows the city projected it would actually need $3.6 million for its share of the work — an increase of about $833,000.

Finding that extra money became crucial after the city awarded Southwood Building Systems Inc. on March 23 a contract to undertake the work in the 7.3-acre park, the city’s oldest.

The Ashland-based company beat out two competitors with its total bid of $6.25 million, according to city records.

That includes the city’s share of the park renovation cost and the $3 million raised by the Monroe Park Conservancy, a nonprofit group that City Council has designated to oversee and manage the park that dates to 1851.

Without the shift of city funding, the city would have been short in covering the cost of the contract.

Mr. Agelasto said the council rarely is consulted on capital projects once the budget for infrastructure is approved.

He, for one, is tired of being left in the dark or learning after the fact. Other council members said they also want more up-to-date information before decisions are made.

As part of approving a new budget for the 2017-18 fiscal year that will begin July 1, City Council amended Mayor Levar M. Stoney’s proposed budget to focus on programs and service codes within departments and require the administration to seek council approval before shifting funds between programs in major departments.

Both Ms. Gray and Ms. Larson, who previously served on the Richmond School Board, consider the mayor’s claims overblown. They note the School Board already follows a similar practice, and they could not recall an instance where controversy erupted between the board and the school administration over transfers of funds between programs.